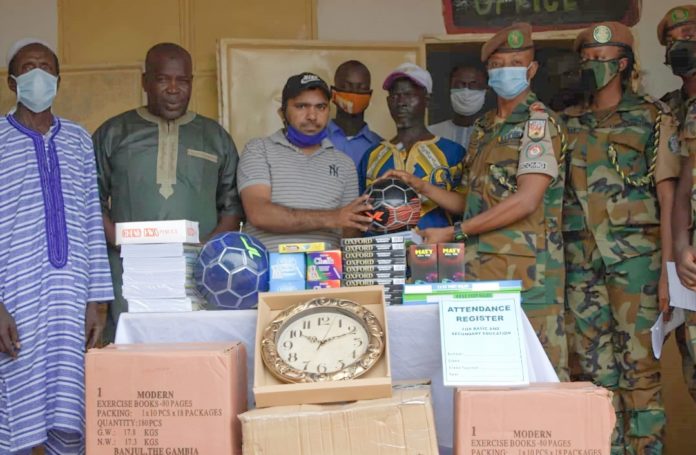 The Ghanaian troops serving with the ECOWAS Mission in The Gambia (ECOMIG) and based in Barra in the North Bank Region, have marked their national day of 4th August which is called Founders’ Day, with a donation of educational materials to the Mbullum Ahmadiyya Muslim Upper Basic and Secondary Schools in the Lower Nuimi District. The donation was made on behalf of the troops by a delegation led by Lieutenant Colonel Richard Danso Nimako, the Commander of the Ghana Contingent.

At a short ceremony in the school to present the items, Lieutenant Colonel Richard Danso Nimako, revealed that Ghana and The Gambia have been two friendly nations since both countries gained their independence from the British. He recalled that the first President of The Gambia, Sir Dawda Kairaba Jawara had his secondary education at the Achimota College in Ghana’s capital city of Accra. Many other Gambians have studied and continue to study in Ghanaian educational institutions and some Ghanaians also come to The Gambia to study, especially in recent times at The Gambia Law School. The two countries therefore have a lot in common when it comes to education.

Whilst commending the students and the teaching staff for putting education first above everything else, the Ghanaian Contingent commander suggested that some of the items donated be given to needy but brilliant students and other hardworking students who exhibit good conduct, to serve as a motivation for the students to excel in whatever they do. He also advised the students to work hard to justify the educational investments that their parents and guardians are making in them because pursuing education will make them better humans than without it. He also advised the teachers and the students to follow the COVID-19 protocols to keep themselves safe against the disease. The Ghanaian senior Army officer as well wished the students the best of luck as they are growing to face life.

Receiving the educational materials on behalf of the Principal of the School, the Vice Principal Mr. Mansoor Ahmed thanked the Ghanaian troops for the wonderful donation and assured that they will put the items to good use for the benefit of both the students and the entire school. He acknowledged the contribution the Ghanaian soldiers have made towards peace in Barra in particular and the entire Gambia in general.  In showing their appreciation to the Ghanaians for the donation, some of the students recited some verses from the holy Quran and prayed for Allah’s continued blessings for the troops.

The Founders’ Day is marked on the 4th of August every year and it takes its root from the 4th of August 1947 which was the day the first political party called the United Gold Coast Convention (UGCC) was formed by some leading Gold Coasters (Ghana was called Gold Coast before independence). All those who led the struggle for independence could trace their roots to this first political party. Subsequently, Ghana gained its independence from the British colonial rule on the 6th of March 1957, becoming the first country to do so in sub-Sahara Africa. This achievement encouraged other freedom fighters to push for their own independence with the support of Ghana. Subsequently, many African countries gained independence from their respective colonial rulers with Ghana becoming the torchbearer for African freedom at that point in the history of the Continent. The 4th of August is therefore observed as a national holiday in Ghana.