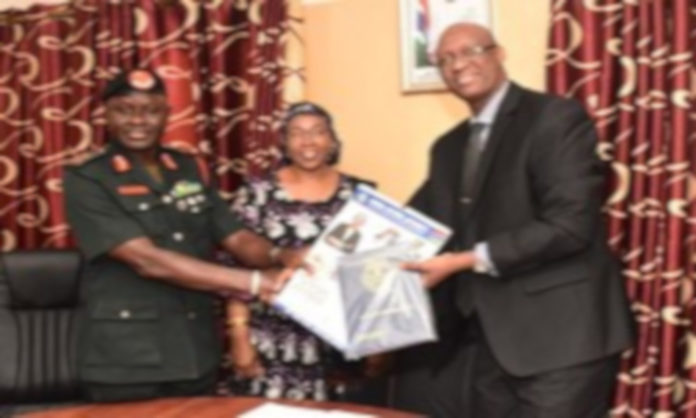 The Chief of Defence Staff of the Gambia Armed Forces (GAF) Major Yakuba Drammeh, has called on the Commissioner General of the Gambia Revenue Authority (GRA).

According to CDS Drammeh the purpose of his visit was to strengthen the already existing good working relationship between the two institutions, and to further strengthen the cordial relations between GAF and the Tax Authorities. He called on the two entities to nurture the peace and tranquility of the country; that since he took command on 17th March 2020, he deemed it fitting to call on all the heads of institutions across the country because they are central in the maintenance of peace and tranquility in the country.

CDS  Drammeh added that “the purpose of the visit is to devise means of working together as well to further solidify relations between our two entities. We want to make sure that we have a legitimate professional Armed Force which is subordinate and accountable to the Authority.” That they want to have a Force whose action falls within international best practices and which is effective and efficient in discharging its constitutional mandate, to address the needs and aspirations of the citizenry.

For his part, the Commissioner General of the GRA expressed profound gratitude to the CDS and his delegation for the visit. He described the visit as timely and reminded them that the mandate of the GRA is to collect revenue which cannot be effectively done in the absence of peace and tranquility.

“The visit was to strengthen the already existing relationship among our entities and I assure you of the unflinching support of GRA in promoting our working relationship with the Army,” he said. He added that it is only when they work together that they can promote peace and tranquility in this country. He disclosed that they have discussed a range of pertinent issues with the aim of promoting of peace and tranquility in the country.

CG Darboe advised the citizenry to nurture the culture of team work, peace and stability because no single institution can bring peace without the support of everyone. He called for concerted effort from all to promote and maintain the peaceful co-existence of the citizenry in the country.