Serrekunda Market Vendors have decried the lack of space in the market while calling on the Council to create more space for them.

They say KMC officials have threatened to evict them from their places of sale in the streets today. They have called on Mayor Talib Bensouda to be considerate and not to use security forces to chase them from their positions. 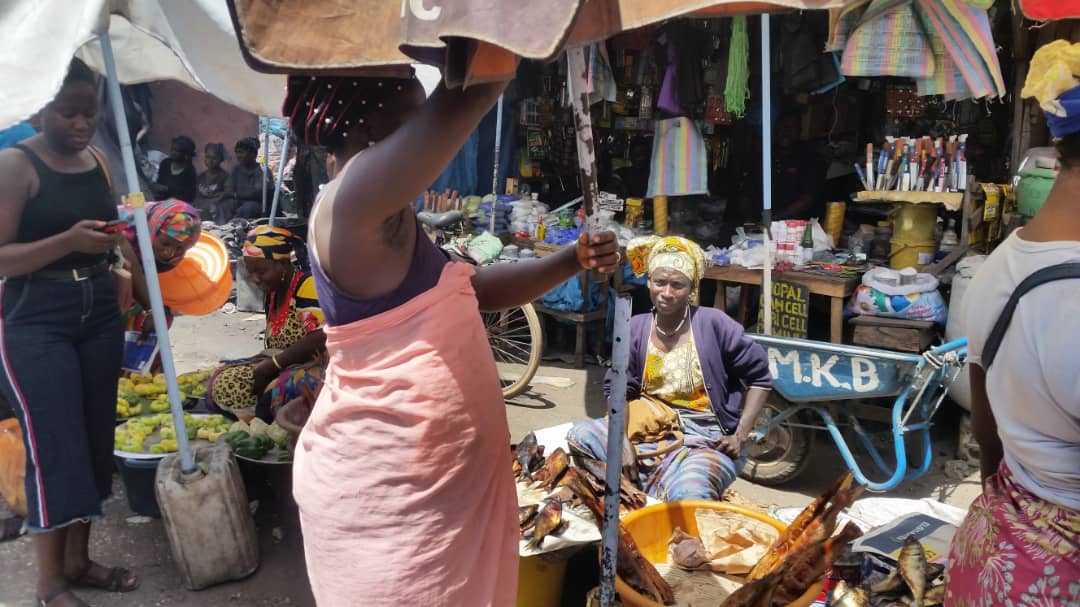 About a thousand or more women sell in the streets of Serrekunda every day. The vendors claim that they are selling in the streets because of insufficient space in the market.

People sell foodstuff among others on highways. Women vendors come as early as 6 am to sell and they leave around noon or 1 pm. They sell different kinds of foodstuffs.

Vendors have told Foroyaa that the Council under the leadership of Talib Bensouda has evicted them twice and this will be the third. They said none of them want to wake up from their homes and come only to sell on a bare ground.

“None of us wants to sell in the street. We keep our goods in other people’s homes. Sometime thieves steal our goods because we do not have places to keep them,” a vendor told Foroyaa.

She said there is not enough space at the Serrekunda market and therefore it is irrational to send them back to the market knowing that the space cannot cater for all of them.

“The market is full and it cannot accommodate all of us,” Jainaba Manjang from Brufut said.

She said their names were taken a year or two ago and the Council promised to provide them space in the market.

“We are still waiting for the Council to show us the space they have provided us. We know that this market is small and cannot accommodate all of us,” she said.

Mai Fatty, a vendor from Sanchaba Sulay Jobe said they have been moved from one place to another by officials from the Council in the recent years but yet they have not been provided with space.

“They (the Council) know 100% that the market cannot accommodate all of us. Sending us to the market is a way of creating problems among vendors because those who have been there wouldn’t appreciate any person to sell outside their shops because it will be a way of hindering their customers,” she said, adding  “when we were sent back to the marker last year, we had countless problems with vendors there because they took advantage of the fact that they were the first people to settle there.”

Other vendors said they have faced several problems with other vendors at the market about space.

“We fought and quarrelled with other vendors for space,” the vendors told Foroyaa.

The vendors said moving from one place to another in search of space wouldn’t in any help them.

They said they wouldn’t want to fight or scramble for space with other vendors.

“We don’t want to fight with the other vendors in the market,” a 36 – year – old vendor told Foroyaa.

They said Mayor Bensouda should not use any force to chase them because the market has no space to accommodate all of them.

“Let Talib Bensouda not use force on us. Let him provide us space and we will happily occupy the space,” they said in loud voice.

They said during last year’s eviction, the paramilitary personnel were throwing their belongings in their trucks indiscriminately.

“We incurred losses during that exercise. Some of us lost thousands of dalasis,” they said.

Efforts to speak to the Council proved unsuccessful. Foroyaa will monitor the development today as it unfolds and inform the general public as things happen.

By Mustapha Jallow  Residents of Nana Ba, Kumbanyi Fula and Kumbanyi Mandinka in Niamina West District, were on Tuesday urged to desist from violence and...
Read more

By Ndey Sowe The International Federation for the Red Cross (IFRC) has on Thursday, 21st October, 2020, at the Gambia Red Cross headquarters at Westfield....
Read more

By Ndey Sowe Adama Barrow, the President of the Gambia has called on the people of Guinea Bissau to reconcile and rally behind His Excellency...
Read more

By Hatab Nyang Tech World Oil Company has recently inaugurated a fuel station at Fula Bantang in the Central River Region (CRR) worth D2.5 million. The...
Read more
FOROYAA Newspaper is your premier Gambian community portal delivering news on politics, legal affairs and more. We provide you with the latest breaking news and videos straight from The Gambia and the rest of the world.