The country’s director of Fisheries said his department has not issued any permit to Chinese fishing vessels to land and operate in Mandinary.

Famara Darboe has on 20th September 2019, denied the claim that his department issued license to Qunlong Fishing Enterprise, a Chinese company, to discharge their catches in Mandinary.

“I did not give any license to Chinese vessels to land their fishes in Mandinary,” he remarked.

The Director declined to give details regarding the issue.

Staff of Qunlong Company have told Foroyaa they obtained approval from Fisheries, National Environment Agency and Department of Parks and Wildlife to land their catches at the Mandinary Park.

The management of Qunlong said they renew their license with the Fisheries Department every three months. 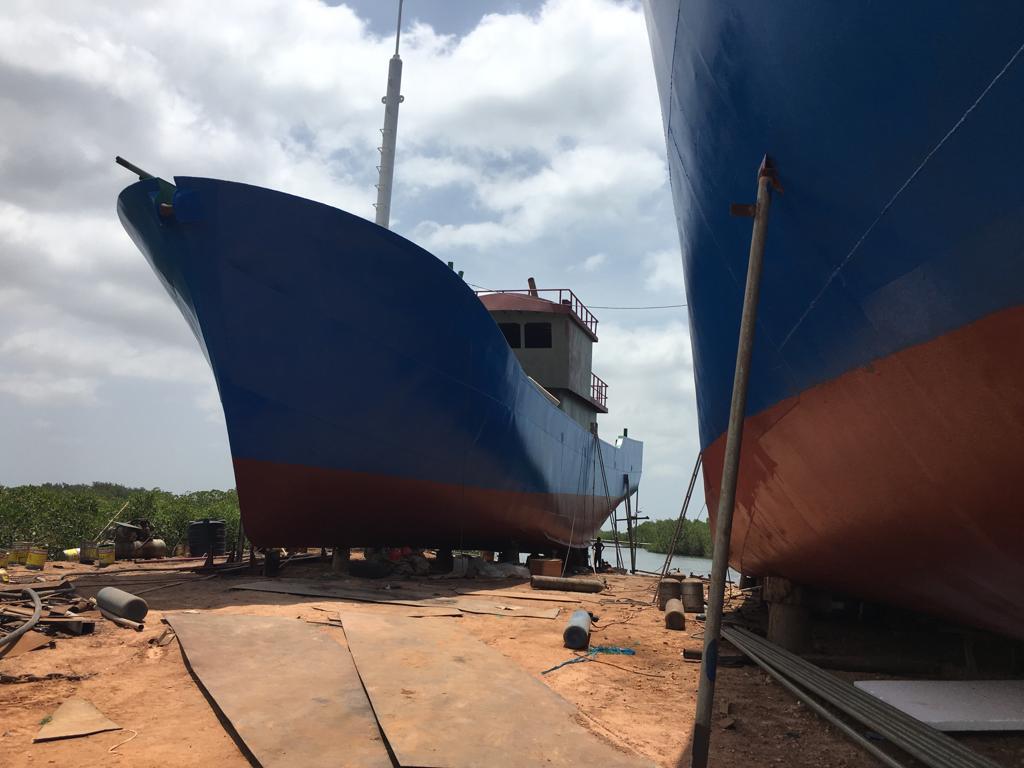 He said: “The first day I met the owners of the vessels, I told them (the Chinese Company) to meet with Fisheries, Parks & Wellfield, NEA and GPA  before they start operation because it is illegal to operate without consulting these authorities,’’  adding “I also advised them that they cannot operate without permit from the department of wildlife.’’

Saidy, who is also a Wetland Officer in Mandinary, said the proprietors of Qunlong were later issued licenses to operate. He added the company regularly renew their license every three months with the authorities at Fisheries.

“The proprietors of the vessels have also signed a Memorandum of understanding (MoU) with the community through its VDC, to indicate that the vessels will be catching fish in the ocean and discharging the catches on their shore, which they agreed to. Concerns were raised by the community that they want the area to be clean,’’ he said.

Saidy said the Company pays twenty thousand dalasis every month as duty to the community through the village development committee.

Construction of Fishing Vessels in Mandinary 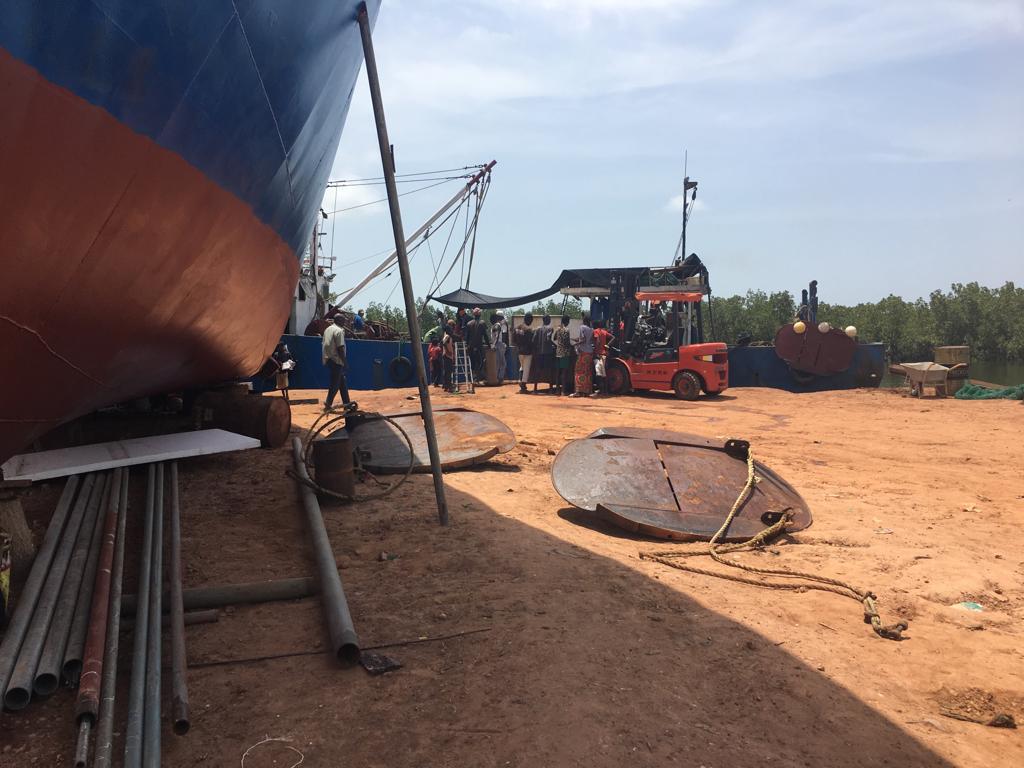 Saidy said: “These new vessels would start to operate soon because we are working together with the Fisheries Department and the Department of Immigration.’’

“Fisheries used to send a team to inspect the area as well as the vessels – so the authorities are fully aware of our activities,’’ said the manager.

He continued: “We catch fish at zone-9 in the ocean. A fishing inspector from the Fisheries Department monitors the activities of the crew so that they do not fish at an authorised place, therefore we are not working illegally.’’

“We supply calamari, butter-fish and conkare to hotels, but during the off session, we normally process our catches,’’ he said.

While at the landing site, the reporters noticed that fishes like butterfish, ladyfish, calamari and other species of fish were discharged by the crew of one of the vessels.

Kawsu Jammeh and Abdoulie, both staff of the National Parks & Wildlife, said the Chinese company has not consulted them before they commenced operations. However, the duo added their institution is aware of the activities been carried out at Mandinary by Qunlong Fishing Enterprise.

“When we noticed their presence, we approached them and invited them to our office, but they told us that they have authority from ‘the top’ to land their catch at Mandinary,’’ the two said.

“We signed an agreement with them. All we did was to tell them what to do and what not to do at the Park,’’ Jammeh said, adding “If I’ve the power to ask them to leave, I will do that, but since we have policy conflict among stakeholders, we can’t do so,’’ he added.

“We only issue licenses to hunters, but not vessels to land in our parks,’’ Jammeh said.

Dodou Trawally, the Executive Director of the National Environment Agency (NEA) said: “If they are operating with license, NEA would give an environmental approval. But before we give them approval, they must satisfy certain conditions.’’

Trawally said when he heard about the activities been carried out in Mandinary by the Chinese, the first thing he did was to go to the department of Fisheries to confirm the issue. 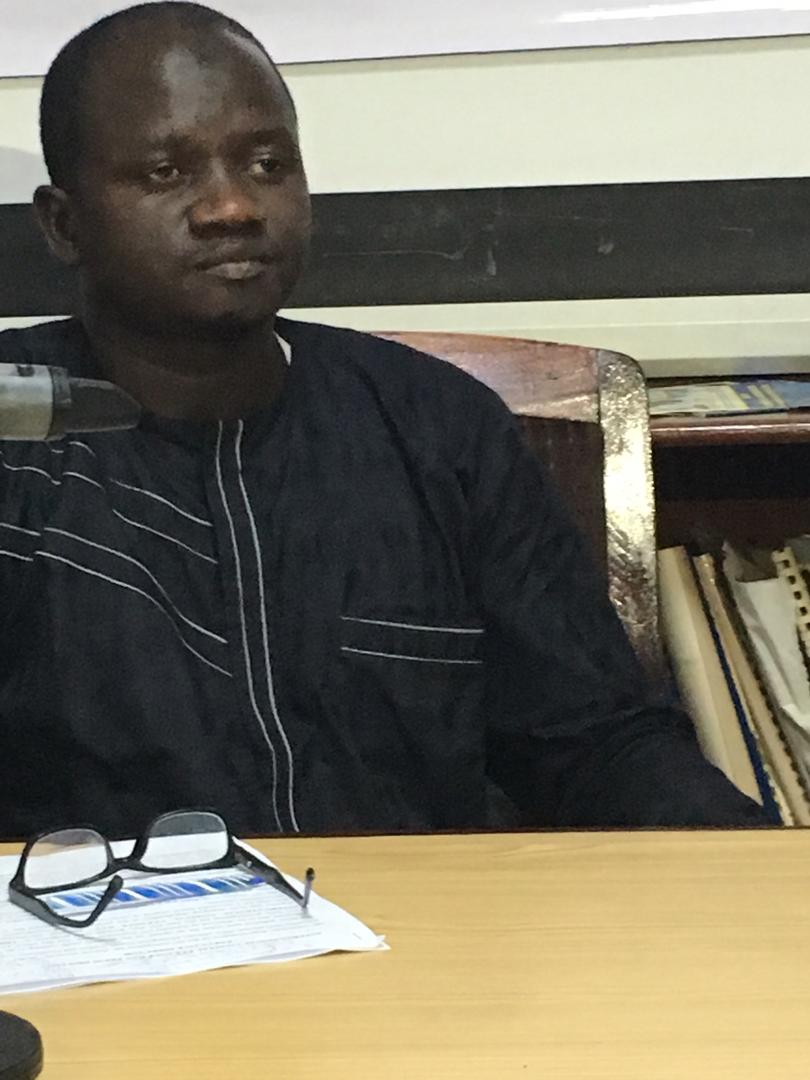 “Authorities at Fisheries and Parks & Wildlife are aware of their operation because I went to Fisheries to confirm what is happening there (at Mandinary). So, if I am doing that, it means I’ve been to the place (Mandinary) and saw things myself,’’ he said.

He couldn’t confirm whether the Chinese vessels have approval from the NEA. He added that his agency usually monitors the activities of the Chinese company through a routing system.

Lamin Cham, the manager of Black Pearl Seafood Restaurant Lodge in Mandinary (near the fish landing site) said his lodge has been operating since 2002.

He accused the Chinese of throwing rubbish into the sea.

He remarked: The noise caused by the engines of their vessels disturbed our guests.”

He added there were instances when their guests had to leave the area because of the noise generated by the activities of the company.

He showed these reporters a copy of a letter they wrote to the Fisheries Ministry, National Environment Agency and Parks and Wildlife complaining about the activities of Qunlong Company. He said this was when the Chinese were building vessels in the area.

He explained that shortly after their complaint was lodged with the relevant authorities, personnel of the Gambia navy went to Mandinary sea side to inspect the area.

“Last season, we lost a lot of tourists as a result of the heavy noise caused by the activities of the Chinese company and I believe the same will happen this year as well,” he said.

The Deputy Permanent Secretary at the Ministry of Fisheries, Mr Malang Darboe, also confirmed that he is aware of the operations of Qunlong, but was quick to add he has no knowledge whether Fisheries issued license to them.  He referred Foroyaa to the Permanent Secretary for further comments.

An official of the Ministry of Tourism, Arts & Culture who spoke to the paper on condition of anonymity, said the ongoing operation of Qunlong is news to him.  He said places reserved for Parks and Wildlife are areas that attract tourists and should be preserved.

Foroyaa has learnt that the captains of the Qunlong vessels were working for Golden Lead after which they parted ways with them. The Chinese captains, Foroyaa learnt, began work with Qunlong sometime in February 2019.

“They were working together with Golden Lead for the past year, and we used to land our catch here and transport it to the Fishmeal company in Gunjur. But these people had a problem with Golden Lead and they decided to go on their own,’’ their agent added.

The agent also confirmed that personnel of the Gambia Navy came to Mandinary and inspected the area, but declined to give further details.

Alhage Fafa Ceesay, the village head of Mandinary said he was not initially informed that the Chinese will use their Park for landing. 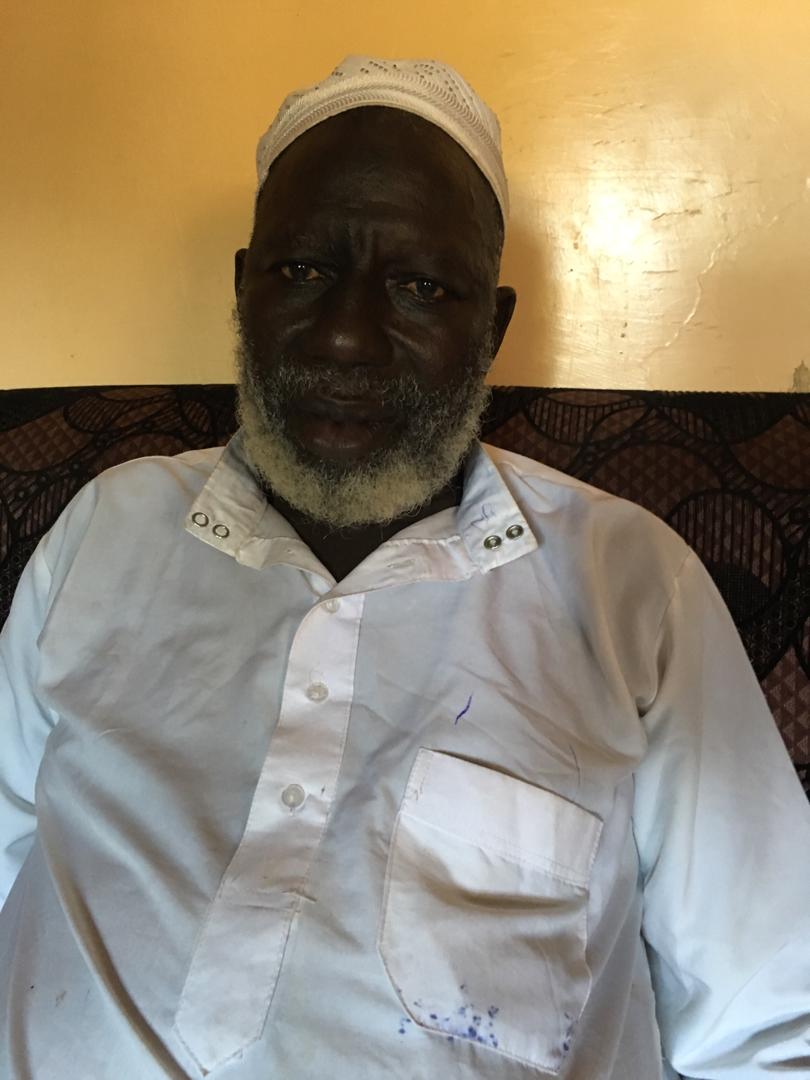 “It was my nephew who saw them and informed me about their activities,” he said, adding “We used this park for tourism and traditional activities, which is not happening now,’’ he said.

The Mandinary Village Development Committee (VDC) public relations officer (PRO) Yusupha Touray, said the vessels operated for months before they came to know about their activities.

He said: “When we approached the vessel owners, they showed us a document from Fisheries which indicated that they were authorised to be there (at the landing site).’’

PRO continued: “We’ve signed a Memorandum of Understanding (MoU) with Qunlong Enterprise for them to pay royalty to the community for using our land.’’

He said the Chinese promised to construct their clinic gate and the road linking the main road to the park, but added these promises were not signed and were yet to be fulfilled by the Company.

Efforts were made to speak to the Chinese, but to no avail.

MUHAMMED S. BAH (MS) The extractive industry in The Gambia has been operating for decades, but experts and anti-corruption advocates believe it’s less transparent. In 2017,...
Read more

QUESTION OF THE DAY The National Assembly seat in Niamina West was occupied by the GDC. The Council Seat for Ker Jarga Ward was also...
Read more

Does the National Disaster Management Agency have a concrete programme for flood victims in KM and West Coast ?

QUESTION OF THE DAY Foroyaa is aware that many families are currently displaced because of the total collapse of houses housing little children and women....
Read more

By Makutu Manneh Scores of passengers, who ply the Banjul-Barra crossing point by boat, have expressed their concerns over the safety of these boats and...
Read more
FOROYAA Newspaper is your premier Gambian community portal delivering news on politics, legal affairs and more. We provide you with the latest breaking news and videos straight from The Gambia and the rest of the world.