Around 17:00hrs on Tuesday 22 October 2019, many people including students and one government official were seriously injured in a road accident in Banjul.

The accident involves a commercial Van and a government vehicle, which occurred around the Christian cemetery opposite the National Assembly complex.

Visiting the scene eyewitnesses said that the Van was coming from the Kanifing Municipality heading towards Banjul and the tyre burst resulting to the vehicle swerving to the other lane. The van somersaulted hitting the government vehicle coming from Banjul. 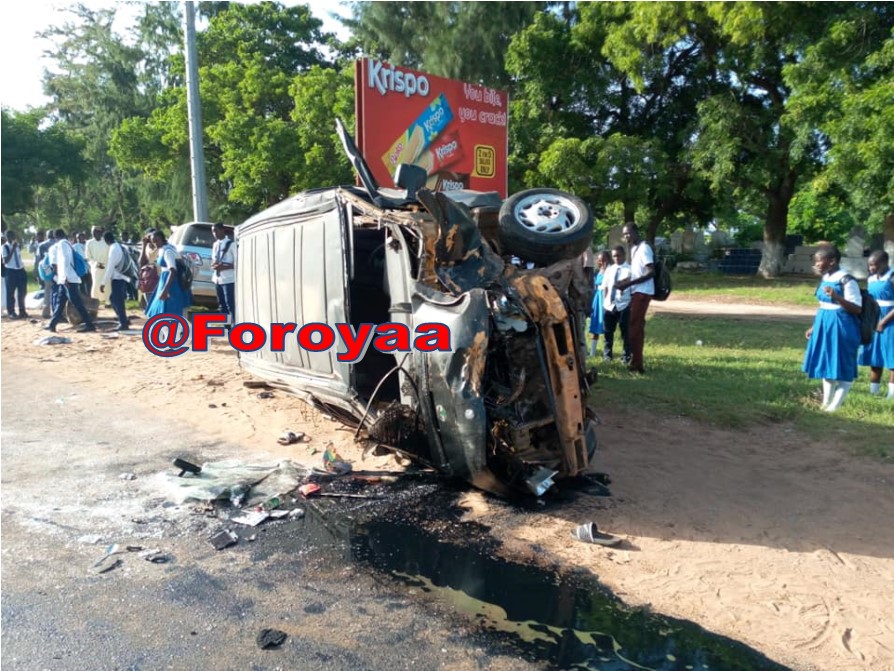 Both vehicles were seriously damaged, and people are seen gathering at the scene including several of police officers and students from various schools. The victims were quickly rushed to the Edward Francis Small Teaching Hospital where they are all admitted and receiving treatment. No causality was confirmed.

One Musa Sinyan a protocol officer who was said to be driving the government vehicle, was seriously injured. The young van driver also sustained injury and was escorted by a police officer to the hospital to receive treatment.

Family members of the victims were seen around the hospital vicinity struggling through tight hospital security to see their loved ones. Nurses and doctors could be seen attending to victims and orderlies were seen moving seriously injured patients from one ward to another.

Efforts were made to reach the police Spokesperson through his mobile phone but this did not materialise.

Reports of fatal road accidents are frequent these days, claiming the lives of many and leaving others with serious injuries.

Many Gambians believe that the issues of accidents are on the rise and that serious steps should be taken to avert such occurrence.

Foroyaa will keep readers posted on any new development on the issue.

By Mustapha Jallow Nineteen  young qualified tailors who were engaged in apprenticeship training were on Saturday certificated by Latrikunda-Sabiji Tailoring Association for their determination and hard...
Read more