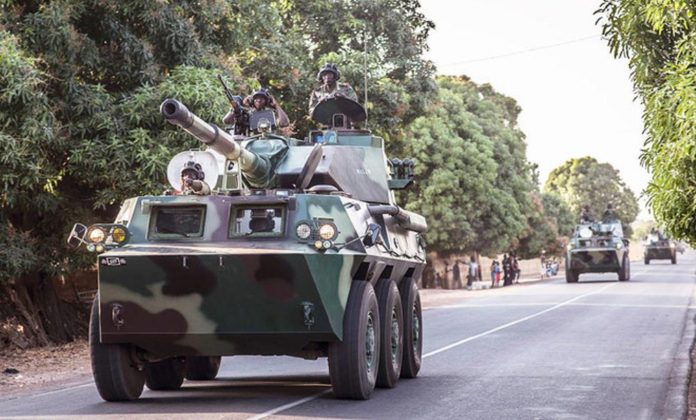 President Adama Barrow has requested for the extension of the mandate of ECOMIG forces in the Gambia, given the fact that the security reforms are underway and there is need to protect the fragile democracy of the country as at now.

President Barrow made these remarks during the 57th ordinary session of the Authority of Heads of States and Government of the Economic Community of West African States in Niger, Niamey.

“Given the reforms underway and the need to protect the fragile democracy in the Gambia, I avail myself this privilege to request for the extension of the mandate of ECOMIG in the Gambia.” He said it should be noted that the country’s security sector reform is at an advanced stage and that for the first time, an audit exercise has been conducted in the Army and a policy developed.

President Barrow said the reform process remains sensitive, noting that the previous Government had molded the security apparatus of the country to serve as a repressive mechanism.

“As such, a range of uncertainties including right sizing and profiling of the Armed Forces, matters of disarmament and demobilization of troops, remain complicated matters to address. As the reform process is ongoing, Government and its partners need to work with caution, in order to complete the process successfully,” President Barrow stated; that for these reasons, the presence of ECOMIG in the country will be a stabilizing factor, whilst providing at the same time, the required capacity building support for the viable implementation of the sector’s reform.

He detailed that amid the COVID-19 pandemic, ‘‘our sub-region still faces political and security threats, including electoral issues and their negative impact on efforts to sustain an enabling environment for development.’’

That this calls for urgent attention and engagement with the country’s partners, to find durable solutions to such persistent challenges. He expressed appreciation of the efforts undertaken by the ECOWAS Commission and its partners, in curbing terrorism in West Africa, especially in the Sahel Saharan Region and the Lake Chad Basin.

“We should all endeavor to ensure that the concrete steps proposed during our last assembly in Abuja, are implemented to the fullest through collaboration and of course, through the support of our development partners,’’ President Barrow said.

On the situation in Mali, President Barrow applauded the ECOWAS Mediation team headed by His Excellency Dr. Goodluck Jonathan, former President of the Federal Republic of Nigeria, for the position taken to broker dialogue and to foster a lasting solution to the impasse in the Republic of Mali; that having reviewed and taken decisions on the situation in Mali in line with ECOWAS protocols relevant to democracy and good governance, the Community needs to ensure that the transition program is followed as stipulated and that at the end of the process, the country successfully returns to normal constitutional order.

“Our presence here in Niamey for this 57th Ordinary Session of the Authority of Heads of States and Governments, provides us with a platform to discuss matters relevant to the development of our sub-region, and the safety and wellbeing of our peoples. In the pursuance of establishing peace and security for development in the Gambia, my Government with the assistance of ECOWAS and other partners, has embarked on a robust security sector reform aimed at bringing the security services under full civilian democratic control. We are ensuring that our human resource and structures are appropriate for the country’s national security needs and the men and women in the Armed and uniformed services, play a meaningful and positive role in national development,” the President remarked; that the African Union and other partners have provided expertise to help the Gambia restructure her security architecture.

President Barrow also seized the opportunity to express his Government’s satisfaction with the ECOWAS Peace Support Operations in the sub-region, with focus on operations within agreed their terms of engagement.

President Barrow concluded by encouraging his colleagues to collaborate more closely, for the advancement of ‘‘our’’ sub-region and for the wellbeing and development of ‘‘our’’ peoples.