In the battle to contain the spread of the deadly Corona virus, Government through the Ministry of Health continues to receive more support in donations of cash and kind from institutions and organizations across the country.

The latest to show their magnanimity is the Stop Step Pharmacy and the Gambia Teachers Union’s Cooperative Credit Union (GTUCCU). 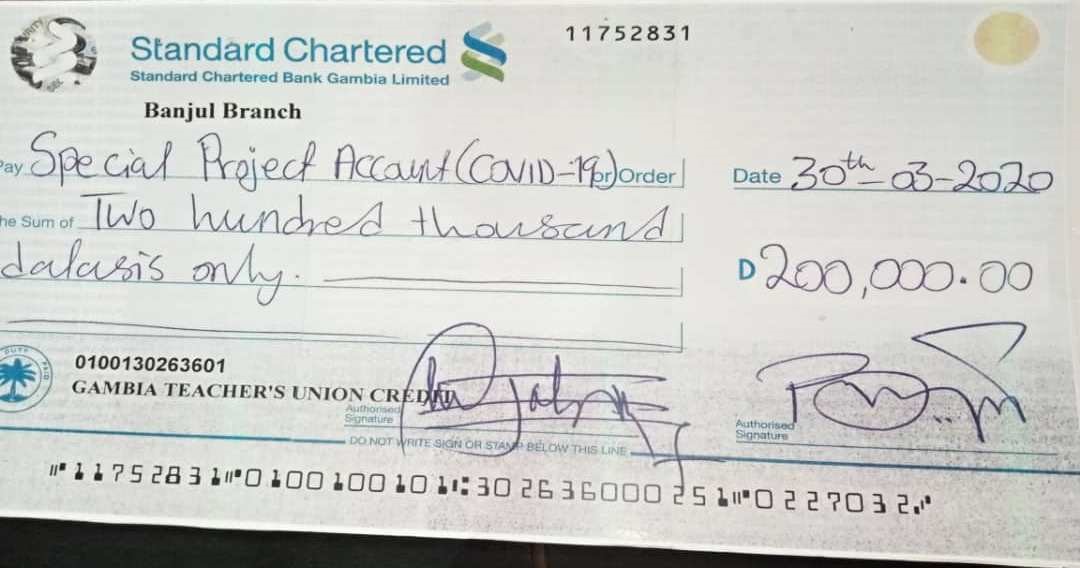 On Tuesday March 31st ‘Stop Step’ Pharmacy and Medicare Clinic donated D6 million worth of medical items to the Ministry of Health in their bid to fight against the deadly pandemic COVID-19. The donated items include sanitizers, hand gloves and other medical items,

Speaking at the presentation ceremony held at the Kotou Central Medical Store, the General Manager of the Pharmacy Mahawa Njie said his institution deems it necessary to play their part by contributing medical items to join the crusade in the fight against COVID-19.

He described the pandemic as a serious disease that has affected the world; that considering the spread of the pandemic, as well as its dangers and negative impacts on lives and economies across the world, they thought it wise to add their resources to that of the Health Ministry to fight against the pandemic.

He said the management of Stop Step Pharmacy believes the donation will go a long way in assisting the country fight the disease. He called on Companies and individuals to join in the fight against COVID-19.

Smart Ihekireh the Administrator of Medicare Clinic who represented Step Pharmacy, said the donation will equip the health sector to mitigate the effects of the pandemic in the Gambia.

Musa Saine, Logistics officer at the Health Ministry, hailed the donor for the gesture which they have made at the right time; that such support is dearly needed within this time and assured that the items will be put into good use.

The Acting Director of Health Services, Musa Bittaye thanked the donor and called on other institutions to emulate Stop Step Pharmacy and Medicare Clinic for their benevolence.

In a similar development, the Gambia Teachers Union’s Cooperative Credit Union (GTUCCU) on behalf of its general membership, on Monday March 30th presented a Cheque for D200, 000 to the Government of The Gambia through the Ministry of Health in their bid to support Government’s endeavor to fight, contain and stop the spread of the Coronavirus.

Baboucarr O. Joof, General Manager GTUCCU explained that the reason for the gesture is because as teachers, they are aware of the dangers coronavirus pose to humanity in general and The Gambia in particular; that their leadership met and deemed it necessary to contribute towards what government is doing to contain the outbreak.

“Nothing is more important than giving resources to government in the fight, containment and management of the spread of coronavirus”, he highlighted; that they cooperated with government by observing all guidelines at their workplace and within their families, but added that it is also important to provide government with resources so that they can avail health care workers equipment they need for personal protection to help save their lives because even after the coronavirus, Gambia needs health care workers.

Joof said the gesture is also meant to support in the sensitization of the public because some people are still in denial. He appealed to the public including members of the teachers’ union to observe the WHO rules, saying even if you have doubts about the virus, obey the rules because you have nothing to lose by obeying the rules”; that there are no drugs to cure the virus at the moment despite research going on which is very expensive. He prayed that The Gambia does not have another case and nobody dies from the virus anymore as well as all over the world.