Mr. Adama Barrow, President of the Republic of the Gambia, presided over the official inauguration of Laminkoto-Pasamass road on Saturday February 29th 2020.

Speaking at the inauguration ceremony, President Barrow said the road project extends for 121 kilometres and fulfilled the goal of completing the Gambia’s North Bank road to its minimum standard. 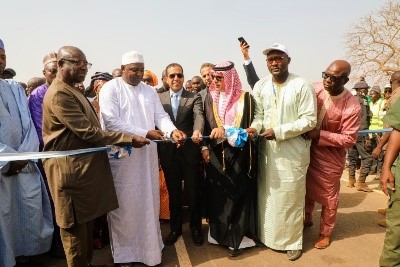 “From Barra, the road connects the northern part to the southern part of the country and it is the symbol of development that will impact thousands of lives as it will ease access to health care and education, while enhancing the movement of people, goods and services by all measures. It will further promote trade and regional connectivity,” President Barrow told a jubilant crowd.

The President further said the Laminkoto-Pasamass road had been in bad condition due to a number of factors.

“The Laminkoto-Pasamass road was destroyed badly due to a number of factors. The main factor was the absence of a proper drainage system. Thus the issue of drainage system was one of the key factors considered during the project design process and 120 convergent drainages have been constructed to ensure both the main and access roads get proper movement of water from road structure,” he said; that the road will stimulate the provision of better and effective public service delivery including agricultural extension, to encourage production which is critical to Gambia’s food self-sufficiency; that in summary, the road project provides a viable pathway to the economic and social progress of the country.

President Barrow acknowledged Government approached partners for the funding of the infrastructural project and acknowledged the significant funding provided by the Saudi Fund, the Kuwait Fund for Arab Economic Development, Arab Bank for Economic Development in Africa and the Africa Development Bank. And on behalf of the Gambia Government and the people of the Gambia, President Barrow expressed appreciation for the laudable contribution of these countries to the achievement of this component of the country’s National Development Plan (NDP).

In her welcome remarks, the Governor of the Upper River Region (URR) Mrs. Fanta B.S. Manneh, said the completion of such a significant project has connected the Northern bank of the Gambia, to the Southern bank through the Fatoto bridge which is currently under construction.

“The achievement of such a significant project will undoubtedly facilitate the timely provision of goods and services from within and outside the sub-region. The construction of this important road is in line with Government’s NDP in providing infrastructural development and livelihood projects for the citizenry especially those in rural communities,’’ the Governor said.

Other speakers at the ceremony include the consultant of the project, a representative of Saudi Fund and the contractor, Mr. Ali Areski. The vote of thanks was delivered by the Governor of the Central River Region Abba Sanyang.

The inauguration ceremony was attended by Mama Kandeh, party leader of the Gambia Democratic Congress (GDC); the NAM for Wulli East Suaibou Touray and the former Minister of Works, Construction and Infrastructure in the former regime Bala Gabba Jahumpa alias ‘‘Action Man’’, who was the Minister, who signed the contract documents for the Laminkoto-Pasamass road on behalf of the former Government.

The Laminkoto-Pasamass road is 121 kilometres stretch of highway that links Wulli East, West and Sandu in URR North to the CRR North Districts of Sami and Niani. It could be recalled that the 61.9 million dollar road project was signed some years back and the project was a three year contract for the construction of 121 kilometres that will link the Northern part of the Gambia, to the South through Fatoto.

By Nelson Manneh Health authorities have over the weekend indicated that twenty-two thousand, eight hundred and thirty-three (22,833) people have been vaccinated against COVID-19 as...
Read more

By: Kebba AF Touray Mr Emmanuel Joof, the Chairperson of the National Human Rights Commission (NHRC), has told the national assembly that the 50 plus...
Read more
FOROYAA Newspaper is your premier Gambian community portal delivering news on politics, legal affairs and more. We provide you with the latest breaking news and videos straight from The Gambia and the rest of the world.