By Mustapha Jallow A regional deputy commissioner of immigration has on Thursday told Foroyaa that security measures have been put...
Read more

By Yankuba Jallow Private lawyers hired by the State to prosecute former officials of the National Intelligence Agency have filed...
Read more

The title Grand Commander of the Gambia was on Monday 17th February 2020 bestowed on President Adama Barrow.

This award gave President Barrow the power to decorate and recognize well deserving citizens of the Gambia in their various occupations. 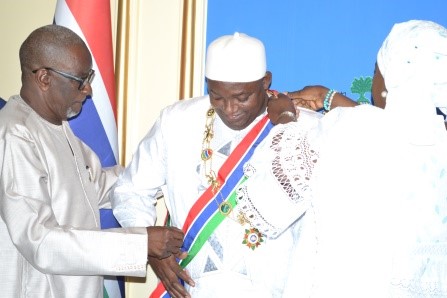 Pateh Jaw Permanent Secretary at the office of the President said President Barrow was supposed to receive this honour immediately after his appointment into office, but that it was delayed for some reasons.

“The Award is not based on achievement but comes with the office of the president,” he said.

Mr. Jaw goes on saying that there are other accolades to be received by the President such as GORG, CRG, ORG, MRG and RGM among others.

The Accolade was given to the President by the Vice President, Dr. Isatou Touray at the State house and the ceremony was attended by Ministers and other invited guest.

By Mustapha Jallow A regional deputy commissioner of immigration has on Thursday told Foroyaa that security measures have been put...
Read more
- Advertisement -
Legal Affairs

By Mustapha Jallow A regional deputy commissioner of immigration has on Thursday told Foroyaa that security measures have been put in place at Gunjur newly...
Read more

The Gambia Government has issued a statement to clarify the controversy over the payment of two hundred thousand dollars ($200,000) to past and present senior officials...
Read more

By Ndey Sowe The President of the Network of Financial and Tax Reporters (NFTR) Gambia chapter has strongly defended his network’s vision to empower and...
Read more
FOROYAA Newspaper is your premier Gambian community portal delivering news on politics, legal affairs and more. We provide you with the latest breaking news and videos straight from The Gambia and the rest of the world.