Welcome to another edition of the ENVIRONMENT COLUMN. In this edition, this reporter visited the Tanji Fish Landing site to check on the indiscriminate PLASTIC POLLUTION AND ITS EFFECTS ON MARINE life

The degree of plastic pollution on the coastal environment of Tanji Fish Landing, has raised some eyebrows, because of the serious threat this can cause to marine life in Gambian waters.

Plastic waste of various types can be found at the Tanji Fishing Landing site including other solid waste, which can be found littered everywhere on shore. The littered waste materials range from old fishing nets, empty tins, cans and bottles, empty packs of cigarette, old vehicle tyres of all sort, etc. Some of these waste materials can be seen floating in the sea.

The National Environment Agency (NEA), has warned people to stop dumping waste indiscriminately, particularly on the coastal shores of the country and in the sea; that this can cause damage not only to humans, but marine life as well.

According to the UN Environment Deficiency report, marine litter is part of the broader problem of waste management, which is becoming a major public health and environmental concern in many countries.

The report said around the world, the Regional Sea programmes are working towards strengthening Laws that prevent industries and individuals from dumping waste into Oceans. The report said the programmes also work on capacity building to help national Governments enforce these Laws. Kebba Sosseh, a bird watcher, has made his complains known to this reporter about the vast unattended waste on the shores of Tanji Fish Landing site; that the place is so filthy to even breath fresh air. Kebba said the waste likewise affects water birds, some of which have travelled from afar, to come and breed; that the pollution of our seas must be stopped by the people or the stake holders and activists concerned. 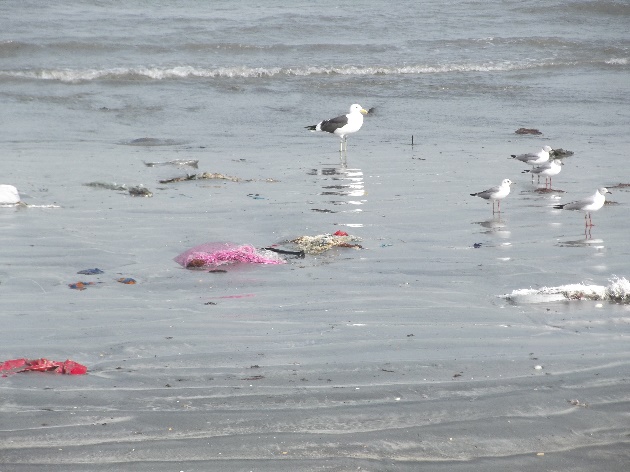 Sheikh Alkinky Sanyang, the Communications Officer of the NEA, said they cannot be telling people what they have do all the time. Sanyang said people and communities have to be responsible of their environment; that the community and the people belong to each other; that this is the reason why they need to take care of the waste on their shores and do everything possible to avoid the indiscriminate dumping of all types of waste that will eventually end up in the sea, as potential pollutants. Sanyang advised residents in coastal towns and villages to carry out terminal beach cleansing exercises to avoid plastic and all types of pollution in our Ocean.