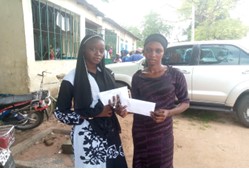 Abdou Aziz Cessay, the Director responsible for Social and Behavioural Change Communication (SBCC) of the “Nafa” Project disclosed that over six thousand beneficiaries are to receive cash transfer in both CRR North and South. Ceesay made this disclosure while speaking to this reporter in Jarreng village, CRR South as the first cash transfer to the remaining seventeen Districts progressed.

“In CRR North and CRR South, we are expect to register over six thousand beneficiaries out of eleven thousand six hundred,” he disclosed.

Giving a highlight of the Project it was explained that the “Nafa” program, a component of the Project was first piloted in three Districts of Foni Bintang, Nianija and Wuli West, but it is subsequently being rolled out to the said seventeen Districts.

He explained that they have a registration desk to confirm whether beneficiaries were enrolled before and when this is confirmed, both the procreator and the principal recipient’s photos are taken again; that when all this is done, they refer the person for verification before they are sent the PSP to receive their monies.

“This project is one of the best projects so far in this country looking at the current situation of the world economy in the midst of a global pandemic (COVID-19) and the current war in Ukraine. So having such a project that is here to build the resilience of extremely poor households is something that we will highly appreciate,” said Ceesay.

According to Ceesay, another reason why the project is important especially at this time of the year, is this is period when the farmer has already sown everything they have in seed and grain, waiting for harvest time.

According to Ceesay, things get very hard for farmers during this period and giving them three thousand at this time and in September for another circle of payment, will go a long way in building their resilience and in helping them to improve their nutritional and health status.

Sohna Cham, a beneficiary from Medina Chamen in the Central River Region (CRR) South, expressed delight for receiving the Nafa cash transfer, and said the money given to the will alleviate them from poverty if it is utilised wisely.

In an interview at Bati Njol in CRR South, Ebrima Dibba, Program Officer for Monitoring and Evaluation at NaNA, informed this medium about the day’s activity and gave an overview of the Project.

“They are not only receiving cash but they are also receiving health and nutrition education which is part of the Social and Behavioural Change Communication (SBCC) component of the Project. We do this before beneficiaries receive their cash,” Dibba said; that giving beneficiaries cash is not enough if you do not tell them what and how to do with money through desirable behaviors so that it can benefit them. He pointed out that the Project is designed in such a way that it inculcates SBCC in the beneficiaries so that they will adopt and take up desired behaviours. Dibba added that this is the first time they are giving out cash to beneficiaries in CRR South.

A beneficiary in Mbayen village in CRR South said the first thing he will do is to buy a bag of rice and a gallon of cooking oil while he shares some between his mother and wife; that he will also buy a small goat for rearing.

Bakary Fofana, from the Department of Community Development, speaking to this reporter in Jarreng highlighted that the project is significant in terms of food security because it is geared towards alleviating poverty and improving food insecurity at household levels.

Fofana assured that the process will continue to be fair and transparent and said the selection was done by an international firm.