No one allowed to Cross Karang-Amdalai Border

No person is allowed to cross the Amdalai-Karang border crossing point except diplomats and vehicles carrying foodstuffs.

This move is in response to the agreement reached by the Governments of The Gambia and Senegal last week to close their borders in a bid to arrest the spread of the deadly Coronavirus. The number of confirmed cases of Coronavirus in Senegal has gone pass one hundred and fifteen while The Gambia only registered three confirmed cases. 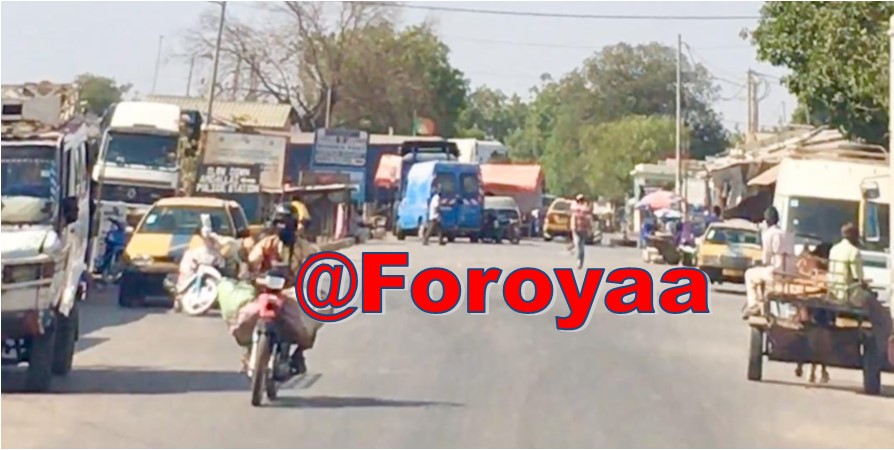 The borders will remain closed for a period of 21 days, according to the agreement between The Gambia and Senegal. At the Karang border, there was heavy presence of security personnel who were turning back travellers from The Gambia going to Senegal.

The new measures by the two countries do not impact on goods as trucks carrying foodstuffs were allowed to cross either side of the border.

While at the border at 12 am on Thursday, it was observed that most of the shops in both countries were closed and others remained opened to provide services to people living within the area – as long as they respect social-distancing between themselves.

It was also noticed that small scale economic operators including fruits sellers and foreign exchange dealers have stopped work for fear of contracting the virus.

The border closure is aimed at controlling the spread of coronavirus. The movement of vehicles in the area has registered a significant decline. No private or commercial vehicle was allowed to enter either Gambia or Senegal. Those attempting to walk to either side of the border were asked to return by the security.

According to the residents of the area, they have been sensitized by health practitioners and volunteers of the Gambia and Senegalese Red Cross Societies about the Coronavirus.

Momodou Sowe, a health officer stationed at Amdalai-border said: “There is low movement of people. Some travellers have been sent away by the Gambian and Senegalese security personnel because it is part of measures to avoid the spread of coronavirus.’’

According to him, they and their Senegalese counterparts have designed a sensitization program to go into communities within the border area to sensitize them on how to prevent themselves from this deadly disease.

“Only trucks with commodities, stones and other building materials were allowed to enter Senegal and Gambia,” Sowe said.

He added: “Only truck drivers and their apprentice were allowed to cross the border. Immediately they arrived here, we screened and asked them to wash their hands before crossing the border.’’

He explained, “We were also ordered by the border security personnel to list-down names of the shop owners within the area as for security reasons.’’

He said: “Some decided to stay at home for their safety while others remained opened, but they closed at 6pm.’’

When these businessmen come in the morning, Sowe continued: “We write each person’s names and ask them to wash their hands before – we screen them.’’

He added a troop of Senegalese paramilitary have since been deployed to patrol the border because it is porous. He detailed that this is because some motor-bikers are engaged in helping people cross the border using the porous entry points.

“Some travellers were intercepted and briefly held by the Senegalese border security. They were later released and asked to return to their homes,’’ he explained.

He added: “Senegalese securities are taking this seriously to ensure the virus does not spread. They are using motorbike to track down travellers sneaking in. They are fully armed.’’

According to Sowe, they are not grappling with any pressure as of now. He said any Senegalese or Gambian who wants to cross – would be sent back to their respective place of origin.

Abdou Gueye, a Senegalese motor-biker said their movement has been restricted adding that they are only allowed to carry food items from The Gambia to Senegal.

“I was not allowed to carry passengers and my movement is limited. I would only go to Gambia or Senegal if someone requested me to come and carry food items,’’ he explained.

He confirmed that they normally sneak travellers into (Gambia/Senegal) the two countries, but this, he added, “if you are caught – you are jailed or fined for violating the border rules.’’

“They will fine you 500.000 CFA. We are violating the law, but we rely on these activities to survive. We are also concerned about the disease, but we need to feed our families,’’ he said.

Pendeh Sowe, a Senegalese residing in “Kaolaka” who was seen struggling to cross to Senegal, said she was denied entrance. She added that she was at the border since in the morning and whenever she attempted to cross the border; the Senegalese security agents would send her back to the Gambia.

“I tried all my best, but they did not allow me to cross. I was returning to my family home in ‘Kolocka’. So, the only option available for me is to go back to my relative’s home,’’ she explained.

Sulayman Bah, a stall owner at Amdalai decried that business activities have gone down and travellers are not buying their food items.

“As you see, the border is in a state of lull. Nothing is moving. I decided to close down my shop and stay at home,’’ he said. He continued, “I only open when someone calls me and request for food stuff.’’

“It was not our wish to sit without engaging in anything – but we have to respect the decision taken by the two authorities,” Bah said.

A senior customs officer at the Gambia Revenue Authority (GRA) stationed at the Amdalai border said the outbreak of coronavirus is slowing down the business activities at the border.