The National Environment Agency`s Director of Technical Services Network has called on refrigeration, air conditioning and super refrigeration technicians to work even harder, to protect the ozone layer from depletion from the use of refrigerants or substances that have global warming and ozone depleting potentials.

Dr. Dawda Badjie recently made this disclosure during the launching of the Kigali Enabling Activities Project, at a local hotel by the NEA, in collaboration with the United Nations Industrial Development Organization (UNIDO). The Kigali Agreement is a reaffirmation of the global intent to mitigate climate change and exemplifies international co-operation in this regard.

The Kigali Amendment to the Montreal Protocol is legally binding and will come into force from January 1, 2019.
“It is proven that life on earth depends on the protection provided by the ozone layer in the stratosphere, which acts as a screen to harmful ultraviolet (UV) solar radiation from the sun. The ozone layer is depleted as a result of the emission of certain human-made chemicals that react and destroy ozone molecules in the stratosphere,” Dr. Badjie posited.

Dr. Badgie further revealed that Government in pursuance of a safe and healthy environment for the present and posterity generations have responded positively and shown firm commitment to phase-out the consumption of Ozone Depleting Substances (ODS) by ratifying the following international conventions and Protocols: 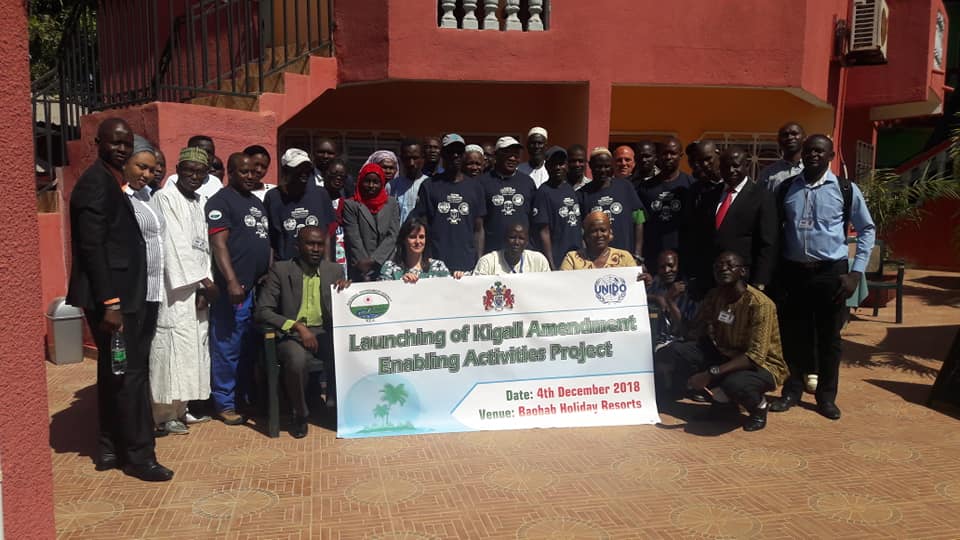 The Gambia is currently working on the ratification of the Kigali Amendment, which enters into force on 1 January 2019.

Over the years, he said in a bid to protect and preserve the Ozone Layer, the NEA through the Ozone Unit, registered remarkable success in the fight against atmospheric pollution and destruction of the Ozone Layer through support of international agencies and programs such as UNEP, GTZ-Proklima.

According to Dr. Badgie, UNDP and UNIDO have enabled the Gambia to achieve the establishment of a national technical working group to monitor, control and eliminate Ozone depleting substances in the country, develop ODS regulation to control the importation and consumption of ozone depleting substances such as Halon, CFC, Carbon Tetrachloride, Methyl Chloroform and Methyl bromide.
The achievements, he said, include the training of refrigeration technicians across the country on refrigeration techniques, refrigerant handling, and recovery and recycling; that up to date, a recovery and recycling scheme is on-going and refrigeration technicians at regional levels have been provided with basic tools and equipment, to improve on their work. Associations across the country have also been provided with modern tools and equipment for the recovery of ODS, to run on Ozone-friendly gases.
Part of the successes is the training of Customs and other security officers on the monitoring and control of ODS imports and exports. The officers have been supplied with tool kits that will enable them implement the export / licensing systems.

“The Montreal protocol on substances that deplete the Ozone, Layer is a successful global treaty due to its outstanding achievements. It is indeed the most successful international environment agreement. The parties of the Montreal Protocol have been keeping our planet cooler, by controlling the production and consumption of Ozone Depleting substances and refrigerants that contribute to the warming of the earth,” Dr. Badjie said.

It is important to note that the Montreal Protocol has so far succeeded in phasing out Ozone Depleting Substances ODSs such as Chloro-Fluoro-Carbons (CFCs) through its National Ozone Units all over the world, but he however pledged that a lot still needs to be done to phase out other ODSs in order to hasten the healing of the Ozone layer. The Gambia phased out CFCs in January 2010.

He announced that the landmark Kigali Amendment, which enters into force on 1 January 2019, sets its sights on Hydro-Fluoro-Carbons (HFCs), a powerful climate-warming gas still used in cooling systems. Under this Amendment, parties will phase down production and consumption of HFCs, creating the potential to avoid up to 0.5oC of warming by the end of the century. He added that when parties deploy new technologies, they will be able to gain competitive advantages in the world market, while implementing the Kigali amendment.

“Alternative technologies are often cost-effective and lead to an improvement in the quality of end products, including energy efficiency. Through the Kigali amendment, the Montreal Protocol takes responsibility for HFCs, and plays a leading role in working towards an environmentally sustainable world, where no one is left behind. It is also consistent with the 2030 Agenda for Sustainable Development. There will be support for enabling activities for institutional strengthening, import and export licensing and quotas, Article 7 reporting, demonstration projects and the development of national strategies for phasing down HFCs,” he said.

Dr. Badjie continued to say that so far, 46 countries have ratified this new instrument and called on others to follow suit and show their commitment to a healthier planet. He expects countries to demonstrate significant progress in implementing the Kigali Amendment at the Climate Summit to be convened in September 2019.

Dr. Badjie revealed that for over three decades, the Montreal Protocol has done much more than shrink the ozone hole; that it has shown us how environmental governance can respond to science, and how countries can come together to address a shared vulnerability.

He reiterated that sensitization and awareness creation using different media outlets is ongoing in an effort to reach out to the grassroots on the protection of the Ozone Layer, including primary school students, on its importance and on substances that do not only deplete the Layer, but contribute to the warming of the earth.

In conclusion, Dr. Badjie said ‘‘we shall all be judged by what we have done to protect our environment particularly the atmosphere that houses the Ozone Layer. It is therefore incumbent on us all, to use Ozone friendly refrigerants, and educate each other on the dangers associated with the use of ODSs and refrigerants that contribute to the warming of the earth.”

Other speakers were Franziska Menten, Project Coordinator at the Montreal Protocol Division under UNIDO, and Yahou Faal Director General of GTTI.