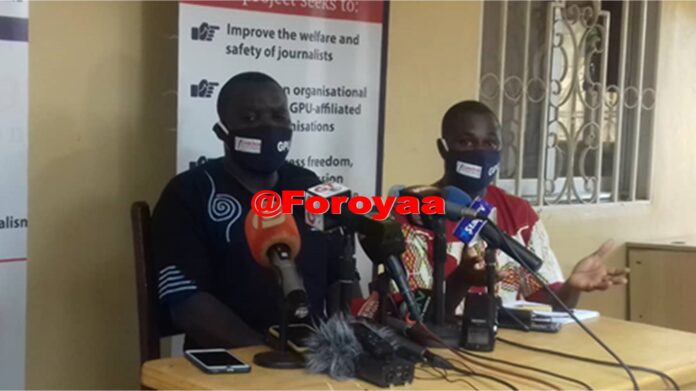 By Nelson Manneh and Yankuba Jallow

On Monday14th September 2020 a group of Journalists went to the National Assembly to cover the proceedings but were told only QTV, GRTS and Eye Africa were allowed to get into the House.

This brought about chaos in the media landscape but for the GPU President, Mr Sheriff Bojang, they were not contacted by the National Assembly before coming up with their decision to stop journalists from covering the sittings.

Bojang Jnr informed the press that he was told by the Communication Director at the National Assembly that there was a meeting held by the authorities and they agreed among themselves that the media, except the three, won’t be allowed to cover the sittings.

“My assumption at that time was if the Parliament was to come up with this decision, there should have been a form of consultation, meeting or even informs the stakeholders – in this case, the media chiefs, the GPU and the Journalists prior to the day. We felt this was an obligation on the Parliament or anybody who wants to take such a decision to inform people on board to negotiate and discuss the matter,” he said.

Bojang said he was informed that the decision was made purely on health grounds because of the Coronavirus. He said the Communications Director said they don’t want to congest the floor.

“The position of the GPU at the time was that stopping journalists from covering anything, not just in this country but all over the world, in the name of safety is the last thing one can take,” he said.

He continued: “We have seen countries on war all over the world, all other people could be banned from entering certain places but Journalist are never banned – they are always in the frontline.”

He said on Monday, 14th September 2020 he went to the Parliament and met the authorities there and had a long discussion with the Communication Director and the Clerk who both insisted that it was done on health grounds to protect everyone that comes to the House including journalists.

“The GPU knows that this is a trying time but the method used by the Parliament was wrong. First of all nobody was contacted, nobody at the GPU was consulted directly or indirectly. I personally knew it the night before,” he said.

Bojang said apart from healthcare workers he doesn’t know any group of people who are mostly infected with the virus than journalists. He said 43 journalists contracted the Coronavirus.

“The head of communication at the parliament at the end of the day said journalists can go in to the gallery but upstairs. The problem upstairs is that when you are there is as good as not being in Banjul because when you are there you cannot get what the parliamentarians are discussing because there is no speaker, if you are a cameraman you cannot film anything,” he said.

He said the GPU does not rule out taking the matter before the court or the National Human Rights Commission.

He said all the GPU wants now is for the National Assembly to change its decision and allow journalists to do coverage.

“We want to give dialogue a chance but we don’t rule out going to the courts or the National Human Rights Commission,” he said.