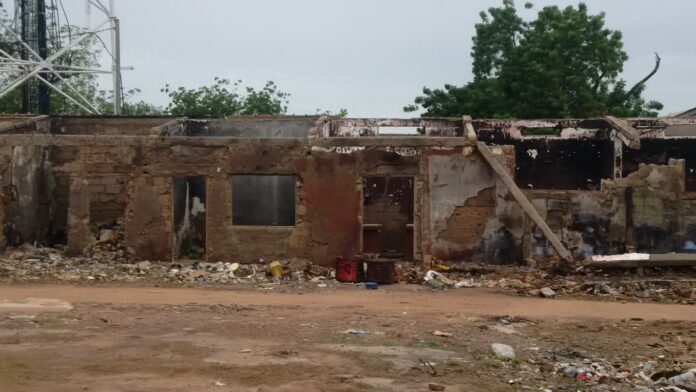 Gigo construction and Gai enterprise have been contracted by Gamworks to rebuild the Basse market which was burnt down in February, 2020 by a mysterious fire break.

A press release issued by the Ministry of Transport, Works and Infrastructure said on Wednesday, a colossal amount of 72, 605, 632 dalasis is set aside for the reconstruction of the said market, anytime soon.

Speaking at the handing over of the project to the contractors in Basse, on Thursday 24th, 2020, Essa Conteh, Deputy Governor of the region told the people of Basse to take ownership of the market once construction work is completed.

Governor Conteh further told them to unite and coordinate among themselves in order to see a successful implementation of this all-important project in their region.

For the contractors, the Governor called on them to do a good work for the people of Basse. “Give us the best. We want a standard market as you know Basse is the second capital of The Gambia,” he said.

He described the reconstruction of the market as timely, saying it will increase the volume of trade in the area and beyond.

For his part, Sailou Bah, Alkalo of Basse, recalled that the day the market got burned, they (the people of Basse) were crying.

Therefore, he said rebuilding the market again is another milestone for the people of Basse, especially the traders.

“We will never play with this market, no matter what the detractors are doing. This market is a historical market and we will cherish it until the end of time,” he told the gathering.
Foday Danjo, Chairman, Basse Area Council, commended the people of Basse for standing with his council during those difficult moments.

He said the rebuilding of the Basse market would once again boost the revenue of the council, which in turn, will trickle down to the people in terms of development and other social amenities.

He also called on the two contractors to do a good job for the council and deliver on time as expected.

Matarr Ceesay, Director of Technical Services at The Ministry of Transport, Works and Infrastructure revealed that when the new market is completed, it will have canteens, an area for meat and fish sellers, mosque, hydrants and an essential equipment for health and safety purposes.

According to him, all the relevant stakeholders, including the Basse Area Council were all incorporated in every stage of the implementation of the project to date.

He said the amount involved is huge; and therefore, he expects that the two contractors would do justice to the project within the agreed time frame of 12 months for the actual completion of the new market.

In attendance were staff from Gamworks, the security, The Ministry of Transport, Works and Infrastructure.