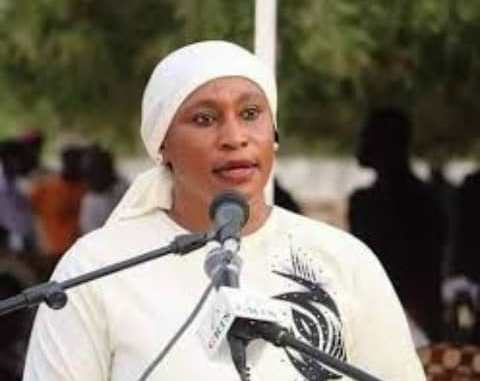 The Deputy Permanent Secretary (DPS) Ministry of Interior, Fanta Samateh Manneh, has urged Gambians, especially young people, to embrace a community policing system to ensure that peace, tranquility and security are maintained in the country.

She said this during a nationwide sensitization with opinion leaders, youth and women on peaceful coexistence and migration.

DPS Manneh has called on the general public to assist the security officers in the country, saying their work is difficult as it involves the protection of lives and properties in the country, which must be the priority of every Gambian.

“In a nation where there is no peace, the attainment of development would ‘tantamount to mission impossible’,” she added.

While informing the convergence in Janjanbureh that migration is in two folds, namely regular and irregular migration, Manneh urged young people to venture into regular migration.

“We are not opposed to migration. What we want is for the people, particularly the young people, to embark on regular migration so that their fundamental human rights and human dignity can be respected in order for them to be humanely treated wherever they go,” she said.

“We have developed among other programs poultry, business and skill training schemes for returning migrants so that they are integrated peacefully in the society and contribute their quota in national development.”

Governor of CRR, Aba Sanyang, hailed the government for going to the grassroot and sensitize people on the significance of peace in the country.

He also congratulated the National Youth Service Scheme for meeting young people in the area and providing them with skills training.

This, he said, will help in curbing the unemployment gap among the youth. He tasked young people to be at the forefront in the maintenance of peace and security and the attainment of national development.

Kumba Dansira, Lady Councilor, urged parents to enlighten their children on the need to safeguard peace in the country so that they would desist from any engaging in actions that can breed violence in the country.

She also urged families to desist from actions that can push their young people into irregular migration, stating that the route is perilous and is depleting the country of its young people, who in future are expected to take charge of the destiny of the Gambia.

Fatou Cesay, a Grade 11 student of Armitage Senior Secondary school, added her voice to the clarion call for young people to distance themselves from taking the perilous “backway” route.

She also urged young people to make the best use of the opportunities provided for them by the government, with it, she said young people can make it in the Gambia.

Chief Alhagie Kebab Touray urged the rich to invest and support young people, to establish entreprises in the country, saying such support and investment will deter young people from venturing into the perilous journey to search for greener pastures in Europe.

“As future leaders, I enjoin you to desist from actions and languages that can ignite violence in the country, because without peace, you cannot develop this country when you assume the mantle of leadership,” he said.

Foday Ceesay of National Youth Service Scheme (NYSS) hailed the NYSS for the training provided for them and assured that they will make the best use of the skills and knowledge acquired from the training to help in curbing youth unemployment.

He said the rise in crime rate is due to many factors, one of which is unemployment.

“So, this training is central in helping to address the terrain. I also implore NYSS to decentralize their skill training centers, to ensure that youth across the country would benefit from skills training,” he said.