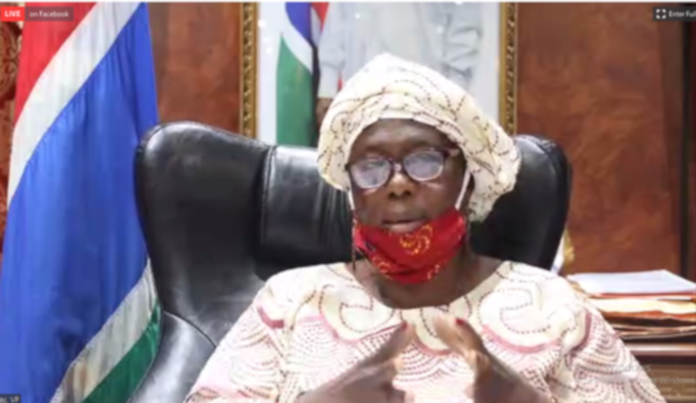 The Gambia has on Monday joined the world to commemorate the International Day of Peace held every September 21, 2020.

The Office of the President Directorate of Strategic Policy and Delivery and the National Youth Council in partnership with the UN System and other key stakeholders jointly commemorated the day held under the theme ”Shaping Peace Together.”

Speaking at the opening ceremony via Zoom platform, Dr. Touray, vice president of The Gambia, said the country which is known for peace is trying to embrace the mantra on peace, stability and security.

She noted research, capacity building and advocacy are key issues they need to consider in the country’s quest to maintain peace and ensure that peace prevails.

Madam Touray said there is need for government support in this process, thus assuring that President Barrow’s Government is committed to creating an enabling environment for peace to prevail.

She said: “The government of the Gambia is here to give you the support, to put you on the right path and follow the trajectory in a very transparent way that is going to help you to make informed choices and positions to follow that.”

She also advised the youths of the country not to allow themselves to be used as tools, but rather ensure that they partake in the decision making processes among other important issues to contribute to the peace and stability of their country.

VP Touray said she is opposing to what others see as rising political tensions in the country.

“For me I think it is created, because as far as I am concerned, I don’t see any rising political concerns. What I am seeing is people misinterpreting sometimes what is going on in the best interest of the country for their own personal gains,” she said.

For her part, Ms. Seraphine Wakana, the UN Resident Coordinator, speaking on behalf of the UN system in The Gambia, said as they commemorate the international day in The Gambia, it was pertinent that they note the economic and social challenges the pandemic has brought to the vulnerable communities in particular.

She said many people have succumbed to the virus, while others lost their jobs and means of livelihoods for their families.

“It has increased stories of sexual and gender based violence which mostly affects women and children as many are forced to stay home due to loss of jobs or emergency regulations,” she said.

“We know that the Government of The Gambia under the leadership of President Adama Barrow has made efforts to respond to the pandemic with various strategies, but the effect of the devastation has been felt by the people of the country.”

Madam Wakana thus encouraged all and sundry to work together to spread compassion, kindness and hope in the face of the pandemic and stand together to eliminate any attempt to use the virus to promote discrimination or hatred.

“This year’s international day of peace is dedicated to fostering dialogue and collecting ideas on how to better prepare against our common enemy, the COVID-19 and heal our nations in the best ways possible. Therefore, this National Inter-Generational Dialogue session is relevant and timely,” she said.