The place of last resort for justice are the courts. They are the Harbinger of a democratic order that allow no room for abuse of power or injustice without redress or remedy.

The change in the Gambia has been at the top so far. No one ought to be convinced that a National Assembly that could reject a Presidential appointment and summon Ministers to render account is one with a difference, even if it fails to meet the expectations of some. This is one of the three key arms of the state.

In the same vein, the Independence with which the court is exercising its mandate and the numerous rulings and judgments made and accepted by the executive confirm that the judiciary is also one with a difference.

These powers are not ordinary ones and should not be wielded by ordinary people. The remuneration of people handling such judicial responsibilities should be adequate to prevent any temptation to be influenced by pecuniary motives.

A judiciary with a difference must ensure that Justice is done and is seen to be done without fear or favour, affection or ill will. The 1997 Constitution has given oversight powers to the Chief Justice. Section 121 states that “ The Chief Justice shall be the Head of the Judiciary and subject to the provisions of the Constitution, shall be responsible for the administration and supervision of the Courts.”

In order to enhance the administration and dispensation of Justice the Office of the Chief justice should have a complaint unit that receives petitions on matters outside appeal processes in the dispensation of justice. There is no doubt that proper supervision would minimse, if not eradicate, miscarriage of justice. This is urgent in tribunals where the media is excluded for the purpose of protecting children. 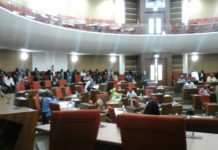 The National Assembly, The President’s Tour And The Prices Of Commodities