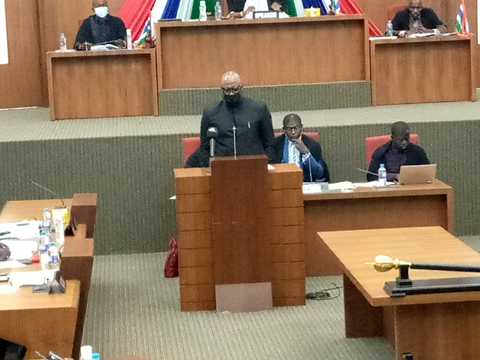 The motion upon ratification will ensure The Gambia disallows any importation and test of nuclear explosives into its territory or any place within its jurisdiction.

Moving the motion, Minister Faye told the assembly that the motion was moved pursuant to Article 2, paragraph 1 of the treaty on the prohibition of nuclear weapons and the declaration of the Gambia Armed Forces (GAF). He added that GAF has never owned possessed or controlled nuclear weapons.

He further said Article 1(G) of the treaty states that there are no nuclear weapons or other nuclear explosive devices in its territory or any place under its jurisdiction or control that is owned, possessed or controlled by another state.

Minister Faye urged the assembly to consider and ratify the comprehensive nuclear test ban treaty, cognizance of the fact that the damages it can cause, not only to human lives and properties, but also to the environment.

“The effects of nuclear radiation would take years and its effects can affect the unborn generation. This will also ensure that the Gambia would not allow any importation and test of nuclear explosive into its territory or any place within its jurisdiction,” he said.

The public official also told the assembly that The Gambia is the only country in West Africa and among countries worldwide that has not ratified the treaty. He said once the treaty is ratified, The Gambia like other signatories will benefit from various capacity training programs, workshops, seminars and conferences.

“Honorable Speaker, I beg to move that this august assembly kindly ratify the comprehensive nuclear test ban treaty,” he moved.