The Constitutional Review Commission (CRC) has successfully conducted a dialogue with Gambians living in the Kingdom of Saudi Arabia.

The session availed Gambians in Saudi Arabia the opportunity to be heard and to add value to the drafting of the new constitution. 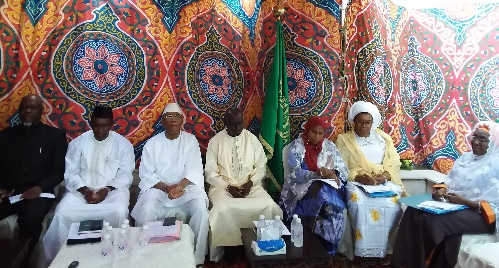 The Jeddah meeting is part of the CRC external consultations with Gambians living in the diaspora to elicit their views and aspirations in drafting a new constitution for The Gambia.

The CRC team to Jeddah was led by Justice Cherno Sulayman Jallow, QC- Chairman of the CRC. Speaking at the CRC public consultation at Al-Rabbwah District, Jeddah, Mr. Omar Gibril Sallah Gambian Ambassador to the Kingdom of Saudi Arabia expressed profound appreciation and gratitude to the CRC for giving the Gambian community in Saudi the opportunity to make contributions towards the drafting of a new Constitution for the country.

Ambassador Sallah told Gambians in Saudi that it is their civic duty and responsibility to take part in the review of the 1997 Constitution. He further commended the CRC and the government of The Gambia for giving the Commission the necessary support for the efficient execution of their mandate.

The Constitutional Review Commission Act 2017 states that, the Commission shall afford the people of The Gambia both within and outside the country the opportunity to freely express their opinion and make suggestions on matters they feel should be considered in drafting the Constitution.

Commissioner Salimatta Touray on behalf of the commission expressed words of appreciation to Gambians in Saudi Arabia for sharing their thoughts, aspirations and opinions on the drafting of the new Constitution.

Commissioner Touray indicated that: “The rich debate we have had and the exchange of ideas today has demonstrated the importance of the external consultations. And the need to carry everyone along.”

She told Gambians present at the Jeddah consultative meeting that for the CRC ‘no idea is small or irrelevant’ and that the CRC appreciates all ideas expressed at the meeting.

In delivering the closing remarks, the Gambian Consul General to Jeddah, Mr. Sheikh Omar Faye said the Gambian community in Saudi Arabia has all reasons to be satisfied for having been chosen as one of the few places where the CRC would conduct public consultation with Gambians in the Diaspora.

Hailing the principles of good governance such as participation, inclusiveness, transparency and ownership espoused by the Commission, the CRC has employed various methodologies in ensuring that the views of Gambians wherever they live are harnessed, processed and considered to make enlightened choices for the country, Consul General Faye pointed out.

Faye indicated that the quality of the contributions expressed by his Gambian compatriots in Jeddah is a lifetime opportunity and will go a long way in shaping the destiny of our people.

Touma Njie’s Case against PPP, 2 Others Fail to Proceed