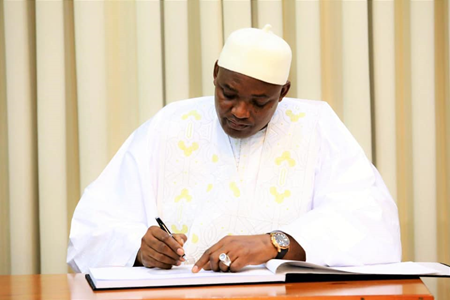 Hopes for a change in the phase of journalism in The Gambia have been hoisted as the long-awaited bill that seeks to empower citizens and journalists in particular to hold the government accountable has been assented to by President Adama Barrow.

This great news broke out on Wednesday 24 August 2021 and got the country’s media fraternity relishing the development. With this development, President Barrow would be credited for approving this bill after 56 years of independence. Apart from holding the government of the day accountable, the idea of the Access to Information Bill, now a law, is also to open up the budding democratic space of the country.

Worthy of note is that an “Access to Information Bill is the right to access public records and information held by public authorities or by persons providing services for them, to provide for the procedure to obtain access to that information, and for connected purposes.”

The union said this is the first time that the civil society has worked with the Government on a legislation from conception to enactment.

Chairperson of the CSO Coalition on ATI, John Charles Njie, expressed optimism that all stakeholders will join hands in ensuring that the law is implemented for the benefit of all Gambians, while hoping that all individuals entrusted with the role of information dissemination will endeavour to dutifully uphold the rule of law.

“The Access to Information law as signed by President Barrow is in line with the wishes of many Gambians based on the feedback we gathered during the numerous consultations and sensitizations on the ATI across the length and breadth of the country,” he said.

GPU President Sheriff Bojang Jr said the signing of the ATI Bill into law is a landmark achievement not just for civil society or the media, but for The Gambia, saying it will go a long way in fostering the culture of transparency and accountability in the public service. Mr Bojang called on Gambians to test and use the law.

“If a law is not tested by the citizens, it becomes an empty document sitting there,” he said.

With the signing of the ATI bill into law, the GPU noted that the collaboration with the Government and other partners will be strengthened to create the necessary structures and systems for the effective enforcement and implementation of the Act.

One of GPU’s partners, the Media Foundation for West Africa (MFWA) commended The Gambia for joining the list of countries in the sub-region, who have the aforesaid law.

Muheeb Saeed, Programme Manager for Freedom of Expression at the MFWA, said without access to sources of information, media freedom becomes an empty theory and accountability to the citizens is undermined.

“This is why The Gambia’s move towards giving its citizens the legal right to access public-interest information is a huge step forward,” Saeed said.

Long Wait Worth It!

The access to information bill is arguably one of the most engaged bills since the dawn of the new dispensation under the regime of current President Barrow. Journalists, security agencies, civil society organisations among others were among the stakeholders the GPU engaged on the bill.

First though, the process of developing the draft bill started in 2016. The GPU wasted no time after former President Yahya Jammeh was defeated in the presidential election in December 2016.

The development of the bill was spearheaded by the Gambia Press Union as part of a two-year project funded by the United Nations Democracy Fund (UNDEF) to enhance media-government relations by improving the legal environment for freedom of expression in The Gambia, the GPU said on its website in January 2020 during a consultative meeting with the National Assembly Select Committee on Education on the draft Access to Information Bill, 2019.

According to GPU, the bill “is modeled on the African Union Model Law on Access to Information and that of the Inter-American Council.”

To ensure the process was as inclusive as possible, the GPU formed a CSO Coalition on Access to Information, comprising more than 35 organisations to be “the face and force behind the bill.” By June 2019, the CSO Coalition on Access to Information presented a draft bill to the Minister of Justice for presentation to the National Assembly. The Gambia’s national assembly passed the bill this year on July 1st.

Meanwhile, while scores of Gambians hailed this development, hoping the new law will be fully implemented. Watch the space!