By Momodou Jarju and Nelson Manneh

Bakary B. Darboe GFA Party Leader and Secretary-General Party Secretary and Leader of ‘Gambia For All’ (GFA) Bakary Bunja Dabo, has promised to change the political situation of The Gambia. Bakary Bunja Dabo alias BB Darboe made this statement when he launched his party in Brikama on Saturday February 8th 2020. 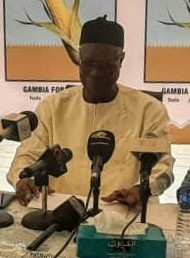 In what was his party’s first rally, Dabo said the county’s political situation is in an ugly shape and is characterized by partisan politics and tribal sentiments among others. The rally which brought together supporters of the party from various regions across the country came barely a month after the Independent Electoral Commission (IEC) announced GFA’s registration.

Dabo, a onetime Minister and Vice President under former president Jawara, said they do not see any political party in the country at the moment that meets their desire; that this is why they formed the GFA. He accused all parties to Coalition 2016 for betraying Gambians.
“Aside from failing to fulfil the promises they gave Gambians, they are engaged in partisan politics on tribal lines or accusing each another. We also observed that they do not pity women and youth, especially the poor. For three years, farmers cannot sell their groundnuts correctly. You do not give farmers’ seeds, fertilizer and extension workers to help them, yet the small produce they harvest for sale becomes another problem for them,” he said.

Speaking further, BB Dabo said: “When we sat to discuss the idea of a party, its formation emanated as a result of the situation the country is in. We thought about the country and observed that for the past 22 years, it was ruled by a military dictatorship; that the 22-year-rule was characterized with deception, lack of work knowledge and maltreatment of people; that it was this reason Gambians stood against the regime and voted it out in 2016. Dabo said the political parties that formulated Coalition 2016, reneged on their promises when they assumed office.

“They no longer want to honour the three years that was promised to the people. The president, who was supposed to spend three years in office and resign, has now formed his own political party. But what is more significant is that the country has a chance to elect someone who will lift the people from the situation and develop their condition,” he said; that as a party, they will pay a lot of attention to Brikama.

Several speakers spoke on the importance of having a voter’s card and not just wearing T-shirts and turning out at rallies. They agreed that it is only voters’ cards that can elect and unseat a president.

Fabakary Sanneh of Kiang in the Lower River Region said the party has come for all Gambians because they feel that there is need to change the political narratives of the country; that the present political situation of the country is not moving in the right direction. He said as a party, they stand for equality as the name indicates and further said that their leader has the requisite knowledge and experience to lift the Gambia from the situation that befalls it.

“If we want to develop our peaceful country, let us make Bakary Bunja Dabo the next president,” he said; that the party is not owned by BB Dabo but by all Gambians. He urged Gambians to change their mindset when it comes to politics and put the right people into office. Several other speakers echoed similar remarks.

On his part, Salieu Taal the Chairperson of the GFA said their party has come at a time when it is needed to design the future of the country.

“This Inauguration of our National Executive Members is a constitutional mandate for any party that is registered,” he said. Taal said the newly elected executive members of GFA were elected by members of the party; that this shows the trust the members of the party have in them. Taal said the party has already fulfilled all its legal requirements; that it is now time to work and in doing so they do not want to live anybody behind.

“In The Gambia, we need system change and this can only come to existence when we have a good leadership,” he said. He urged the elected executive members of the party to work together to achieve the objectives of the party.

Bakary B. Darboe, Secretary-General and Party Leader of the Gambia For All Party, formally welcomed the elected members to their various positions.

APRC Hands Over Petition to President Barrow Through Justice Minister