In the Gambia the percentage of youths engaged in small scale fishing is low. The sector is dominated by Adults and majority of them in the urban area are Senegalese.

Even the few in the sector are also migrating due to lack of support from the fisheries department.

Going towards the Bakau fishing Center along the 80 kilometre coastline of the country, one can observe quietness around the fishing center, a place always crowded with people.

Boats are seen floating in the waves of the ocean. 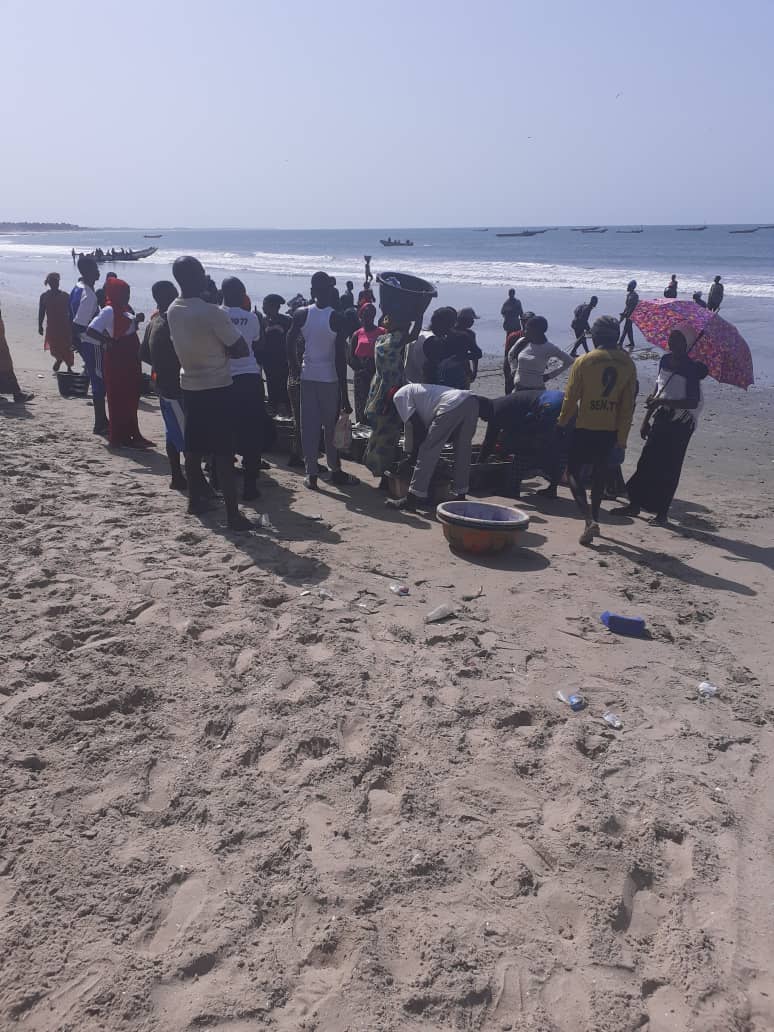 ‘You see these boats, there is no one there, because some of the boys left for Europe some days back,’ Alieu Saine the president of the youths in the small-scale fishers remarked.

‘If government and fisheries don’t invest in youths, and the sector they will always venture into this perilous journey’ he added.

Speaking to this reporter under the canopy of a locally made tent at the beach he said, ‘if you’re doing something and you don’t have any encouragement but discouragement you will find some other means out, this is, what has caused the migration.’

‘The youths don’t have any support from the government nor the private sector,’ he added.

He went on to say Gambians in general are not investing in fisheries like Senegalese.

He asserted that the Senegalese know what can be derived from the sea and that’s why they invest in it.

He argued that if the government and the private sector bring more boats and invest in the fishing industry, there will more jobs for the youths and they will not migrate.

Mr. Saine said lack of youths’ participation in the sector normally causes scarcity of fish especially when Senegalese go on holiday since the majority of boats at sea are owned by them.

He said in the whole Gambia there is no institution that offers training in the fisheries sector, not even basic things like how to sew nets. ‘Could you imagine each net is costing around $9, that’s more than what a person needs in a day to survive,’ he remarked.

‘We thought the government will help us as the Senegalese government does for their counterparts in Senegal assisting them with boats and materials.

At Gunjur landing site I met Bamba Gomez and his friend who were busy selling fish as they were sandwiched by fish mongers and buyers.

He said the fisheries department are not engaging them and they not helping them.

‘We have Gambian boats that belong to us which are not given by the state, they don’t provide any thing for us, not only in Gunjur but all over from Banjul, Bakau to Kartong; no youth will tell you that government has supported them,’ he asserted.

He continued: ‘We also need support; we need it because most young men are hustling from nothing to something.’

He lamented: ‘We pay taxes, we do what they say, but we don’t get anything in return.

He was forthright in listing their needs. ‘We also want nets, boats and fishing gadgets, then fishing can be useful and the prices of fish can be lowered,’ he said.

He decried the undermining of the livelihood of Gambian fisher folks by the fishmeal factories.

‘You see these foreign boats they’re all waiting for the fishmeal factories and the fishing season to resume. Then they will start fishing and sell it to the factories instead of the Gambians,’ he said.

In the Gambia every year the sea is closed to night fishing from June – November, likewise Senegal but the Gambian fishing season is always marred with controversies; instead closing for six month they close for four months.

Young drivers at Tanji fish landing site who transport fish also had their say. One Ebrima Jabang said he is a driver whose job is to carry fish.

He said they will want vehicles that have refrigerators so they can transport bonga fish (‘Challo’) up country.

‘Let me repeat it sir!  All we want are vehicles and more ice plants at the landing sites, so the fish will not rot,’ he said.

Nfamara Drammeh an environmentalist speaking on issue, said according to a survey conducted by fisheries department in 2006, the most productive coastal fishes are dominated by non-nationals mainly Senegalese.

He said the survey results revealed that of the 1410 head fishermen operating in artisanal fisheries 805 are Gambians and 605 foreign but in coastal areas foreign nationals, mainly Senegalese form the majority with 249 head fishermen compared to 167 Gambians.

On the issue of youths Mr. Drammeh said it is important for the youths of The Gambia to engage in the fisheries sector not only for employment creation but also to ensure transfer of knowledge across generation that will promote a sustainable supply of aquatic resources.

He said some of the youths are not venturing in fishing because of inadequate support and training from the government – the access to credit facilities to venture into fisheries is limited.

‘Without the equipment and necessary training, it will difficult for the youths to engage in fishing’ he said.

Mr. Drammeh   said constraints in fisheries sector include lack of Gazetted bye-laws to enable the local authorities to enforce compliance and unsustainable fishing practices by the fishermen and now the operation of Chinese fishmeal factories, make it worse, they compete with local fishermen.

In conclusion, he outlined the following as challenges that need attention: ‘Inadequate government support including the provision of incentives such as inputs, supplies, policies and sanitization to encourage youths to venture into fishing’.

Mustapha Manneh an Environmentalist/Journalist in Kartong also said youths in The Gambia are less skillful in fishing.

He said fishing is mostly associated with ethnicity and the government should invest a lot in youths, meaning buying boats and fishing gears.

He said many youths are not skillful in fishing and the industry needs high investment.

‘Fishing is a heavy investment market. They need a better market and the government must protect their interests,’ he said.

Attempts, before going to press, to secure an interview or obtain documents on government programmes and plans for the youth in the fisheries sector was unsuccessful.

Meanwhile, the Food and Agricultural organization have said that 12 million Africans depend on fisheries for their livelihood as small-scale fishing is one sources of income for inhabitants living on the African Coast.

Throughout our investigation in almost six fishing communities at the coast, there are three fishmeal factories in those communities.

Now they felt that their lives and livelihoods are threatened.

These situations also cause lot of anger and frustration among youths and other fishermen who felt that their sea has been sold out to outsiders.