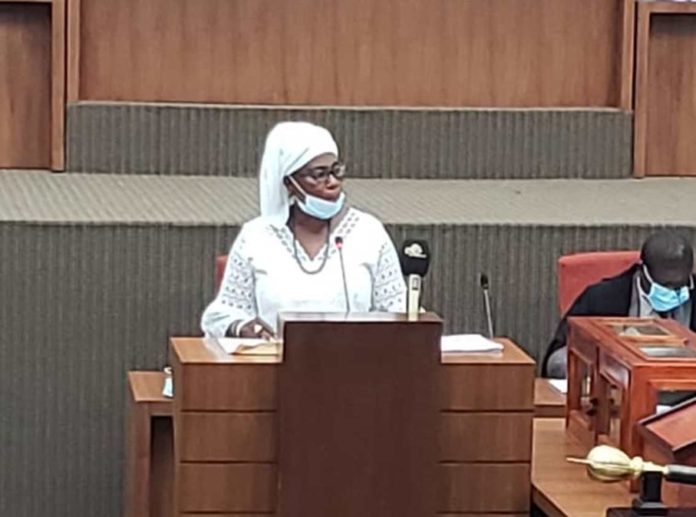 The Vice President of The Gambia, Dr. Isatou Touray, has on Wednesday defended the decision of the management of the Food Safety and Quality Authority (FSQA) to employ disciplinary measures against 25 staff of the aforesaid authority.

Eleven staffs of the FSQA were relieved of their duties, 13 sent on administrative leave without pay and one on three months suspension without pay.

VP Touray made the justification in Banjul during the second ordinary session of the national assembly legislative year 2020, while responding to questions raised by lawmakers.

Responding to the question posed by Banjul Central lawmaker, Muhammed Ndow, Dr. Touray said the reasons the authority made the decision were clear. She outlined the various incidents and actions that led to the ‘unfortunate situation.’

“Following a petition written by several staff of the authority against the director general in October 2019 sent to the office of the vice president and copied to the secretary general and head of civil service office of the president and the national assembly and circulated all over social media and press and an unofficial sit-down strike was undertaken by these staff leading to an almost complete stoppage of inspection of the authority,” she said.

“But more critically, refuse to carry out any orders or instructions from the supervisors and management and also subjected the other staff to harassment and insult and even label senior management as enablers who will be dealt with once they achieve their objective of getting the director general of the food, safety and quality authority dismissed,” she said.

The anti-FGM campaigner said the staff upon receiving their posting orders, from June 2019, refused to comply and went to the chairman of the board of directors who intervened and decided to give them a month deferral without management’s consultation and approval.

Madam Touray said the chairman interfered directly in the internal operations and exceeded any authority of the board or the chairperson.

VP Touray went on to say that long scheduled postings and staff deployment nationally were postponed to give time for the petitioners to meet the board.

At the end of the moth, she said the petitioners still refuse to comply with any instructions from their supervisors and management for deferral.

“They were again issued posting orders and again they refused to comply and insisted that they would not go without the resolution of the petition. And under the Gambia Government Code of Conduct Manual section 6.11 refusal to comply with a posting order is considered a gross misconduct,” he charged.

Madam Touray said in January 2020, the staff were given formal last warning and then issued posting orders for which they refused to comply with.

After three months of refusal to work or comply with legal instruments, VP Touray said, they were then placed on administrative leave without pay until they claim their petition is resolved in their favour.

Touray indicated that the petitioners organized and held an unauthorized press conference at the grounds of the authority in which they repeated their false allegations and innuendos as well as continued to operate with impunity and arrogance in total disregard of the service rule and government orders.

She added that the petitioners are well within their rights to petition because it is a matter of rights.

However, she said: “But within the service rule, GO and laws of the Gambia and other related acts and not necessarily resorting to social and other media with false allegations and defamations or character assassination are not only unethical and unprofessional ad morally wrong, but against the service rules of the FSQA, the Government Orders and the laws of The Gambia.”

Based on the above, she said, the FSQA management took the decision to institute disciplinary measures in line with the food, safety and quality act service rule and the Gambia Government General Orders and Code of Conduct.

Madam Touray said Clause 03031 of the FSQA Service Rules provides that the authority reserve the right to dismiss any employee for serious misconduct for undermining the confidence of their employer or the image of their employer.

She said participation in the “illegal press conference” without the permission of the management held at the FSQA premises on 15 January 2020 is contrary to clause 0703 of the Food Safety and Quality Services Rules.

“Refusal of posting orders and any orders from your immediate supervisors and management is in violation of clause 6.14 of the General Orders Code of Conduct,” she said.

She also said the petitioners decided to post damaging information on the social media, thus flouting the confidentiality required in administrative works contrary to section 1 general clause 03103 of the Gambia Government General Orders and Code of Conduct.

Meanwhile, she said what she was reading has been overtaken by events, saying every decision that was made on the matter has been overturned.

“And currently, the staffs of the FSQA are now all reinstated. They are now given opportunity with warning letters to come back to the institution.

“And the basis on which the reversal was done was that yes it has been prepared but not signed. The documents were not signed and therefore the argument was since they were not signed, we are going to make sure that we bring them back and we work on the reforms,” she said.

Madam Touray admitted that there are lacunas in the institution and as a government they are doing everything possible to fix it.

She said because the rules of FSQA were not signed, they allowed the staff to be reinstated and that the matter was a learning point for them.

“We can only apply the law when the law in itself has gone through certain processes and procedures,” she said.