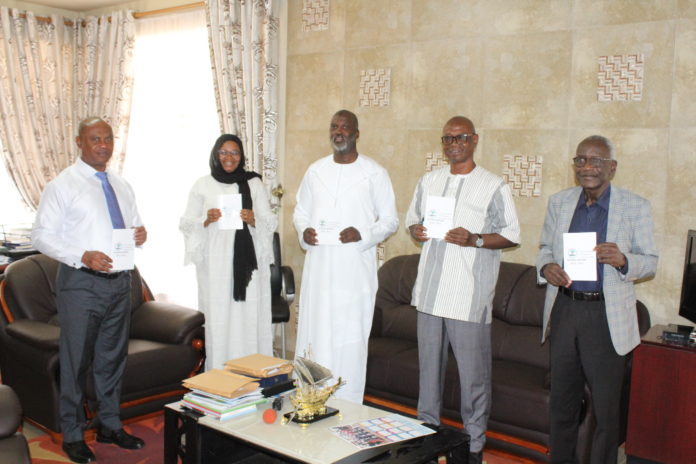 As required by their Act, the Truth Reconciliation and Reparation Commission (TRRC) has on Wednesday, 29th of April, submitted their interim report to the Government.

Section 14 Subsection 4 of the TRRC Act makes it mandatory on the Commission, after one year of its establishment, to submit an interim report to the President detailing their activities.

At a small ceremony held at the Ministry of Justice, TRRC Chair Dr Lamin Sise handed over copies of the report to Justice Minister Abubacarr Tambadou for onward transmission to President Barrow.

Handing over the report, Dr. Sise apologized for the slight delay in submission, but expressed delight that the Commission has now finished work on the interim report and will now focus on completing its mandate and working on the final report. He reminded the Minister that as per the provisions of the TRRC Act, the Interim Report just covers the Commission’s activities during its first year of existence and does not contain any recommendations. The recommendations will be part of the final report of the Commission.

Receiving the Interim Report on behalf of President Barrow, Minister Tambadou thanked Chairman Sise and all the Commissioners and staff of the TRRC for what he called the wonderful job they have done so far. The TRRC, he said, “has set the bar so high as far as transitional justice and truth commissions are concerned around the world.” Minister Tambadou assured the TRRC team that he would duly transmit the report to the President and would do all he can to continue supporting the important work the Commission is doing.

According to Dr. Jallow, the Interim Report is available on the TRRC website (www.trrc.gm) and Facebook page.