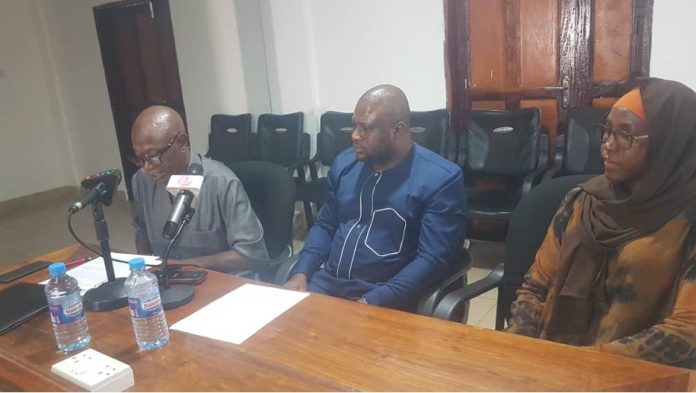 The Never Again Network (NAN) with the motto empowering the future was launched last Saturday 12th November, 2022. The idea of the Network, according to Lawyer Abdoulie Fatty who is its Deputy National Coordinator, was conceived at the defunct TRRC by former staff of the Commission.

According to him, the Network comprises different stakeholders.

“Essentially it is to embrace values that will nurture democracy and respect for human rights, rule of law, liberty and all the other rights, so that what happened between 1994 and 2017 will never happen again.

“So, it begins with the idea that we as a people have to change before we can talk about changing the country,” he said.

Lawyer Fatty asserted that if people begin to change by taking small steps and by embracing values of tolerance, respect and inclusiveness, then perhaps it will have an impact on society, such that people will have self-respect and respect for one another, and as neighbours. He said that is the way Government can mirror itself and begin to respect the human rights and freedoms of the people. He said the Never Again Slogan by the TRRC was meant to reconstruct the country; and as part of that reconstruction effort, the Network was built to embrace the slogan.

“Never Again is more than a slogan, and means that what happened under Yahya Jammeh, should never happen again. It is more than that. It is about changing our attitudes and changing how we do things so that we will create a society for our children and our children’s children that is just, fair and equitable,” he said.

Satang Dumbuya, the Youth Outreach Coordinator of the Network made similar remarks, and said the Network comprises former TRRC staff with the dominance of young people.

“We decided to stick to the ‘Never Again’ slogan of the TRRC to form the ‘Never Again Network,” she said; that the Network has a dynamic way of reaching people through advocacy, by using young people as tools for change, because there cannot be meaningful development without them.

As The Gambia enters the post-TRRC period and the implementing phase of the Commission’s work, both public institutions and civil society organizations are engaged in helping people to understand the contents of the Commission’s final report and the government’s white paper.

The Ministry of Justice, the National Human Rights Commission, victims and women-led organizations  like ‘Aneked’, ‘WAVE’, ‘WIL’L, Victims Centre and several international organizations like the UNDP, OHCHR, the ICTJ, International Coalition of Sites of Conscience, and Trial International among others, are actively engaging various sectors of the Gambian population with a view to help them understand the outcomes of the TRRC’s work and to find ways and means of encouraging the implementation of its recommendations.

Part of these engagements is a response to government’s invitation of Gambian civil society and other partners, to collaborate in ensuring that the Commission’s recommendations are implemented.

Dr. Baba Galleh Jallow, a former Executive Secretary of the TRRC and now National Coordinator of NAN, said it is within this context and spirit that the ‘Never Again Network’ was born.

Jallow said the Network’s motto: “empowering the future”, focuses on empowering young people both and outside the school system, and in getting them involved in ensuring that never again shall The Gambia undergo dictatorship, or suffer the kinds of gross human right violations that occurred under the dictatorship of Yahya Jammeh.

“Focusing on empowering young people will aid the positive transformation of Gambian society for a better and brighter future, in line with the rationale for the country’s transitional justice process,” he added.

Jallow said the central objectives of the Network: (1) to create a nationwide network of young people’s organizations, including school clubs, sports teams, entertainment groups and community groups that will strive to understand The Gambia’s recent history of dictatorship and human rights violations and that will serve as a bulwark against the emergence of another dictatorship and a regime of human rights violations in the country; (2) to empower young people across the country through dialogue on civic education and citizen’s rights and responsibilities; (3) to build partnerships and collaborate with both national and international organizations interested in The Gambia’s transitional justice process and in particular, the participation of young people, both male and female, in that process; (4) to promote a culture of civility and respect for human rights and the rule of law by all Gambians; (5) to help build an empowered future society that is united on the basis of a common humanity and a culture of universal mutual respect, and (6) to groom the younger generation of Gambians in civic awareness and collective civility that will make them great human beings and great citizens of the country.

“We understand this statement to mean that complex social problems require radical and unorthodox solutions. For this reason, the Never Again Network seeks to represent a radical departure from traditional models of social formation. The Network’s motto: “Empowering the Future”, is meant to emphasize that the Network generally aims to improve the lives of the Gambian people, in particular young people in the short, medium and long terms. The complexity of that task requires radical new ways of thinking, of doing things, and of acting and interacting with our fellow human beings at all levels of Gambian society,” Jallow said.

The Guiding Principles are: (1) Only the Truth is acceptable; (2) All humans deserve respect; (3) All living things, human or non-humans, deserve good treatment, and (4) There’s always room for learning and improvement.

“The Network will popularize these principles and operate by them,” Jallow said.

He said building a healthy society and a healthy, empowered future requires behaving in healthy ways across the board and without exception.

On their Operational Strategies, Dr. Jallow said the Never Again Network shall carry out its work in the following ways: (1) Conduct regular face-to-face outreach activities in schools and communities across the country in pursuit of its objectives and of the common good. That through face-to-face engagements, the Network will roll out its civic education and youth empowerment programs; (2) Reach out to government / public institutions, and both national and international non-Governmental organizations and institutions interested in youth empowerment and participation in transitional justice and in the lives of their nation, with a view to forging partnerships and avenues of collaboration in pursuit of its objectives and of the common good; (3) Make optimum use of both traditional and social media outlets to communicate its objectives and ideas, and to advocate for the implementation of the TRRC recommendations, and to enable the creation of a culture of civic empowerment, social cohesion and civility.

Their expected outcome according Dr. Jallow is to build a countrywide network of enlightened and empowered young people familiar with their recent history and the country’s transitional justice process, well equipped to prevent a recurrence of dictatorship and human rights violations in The Gambia; widespread popular culture of social cohesion, civility and respect for human rights and the rule of law among young Gambians in particular, and among Gambians in general

“The ultimate goal of the Never Again Network is that all Gambians live in a peaceful, responsible and democratic society where their rights and persons are respected, their skills, talents and potentials recognized and promoted, their work adequately rewarded and their basic day-to-day needs, met. In short, an enlightened and empowered Gambian society is one that can hold its government accountable and protect itself from state impunity,” Dr. Jallow concluded.