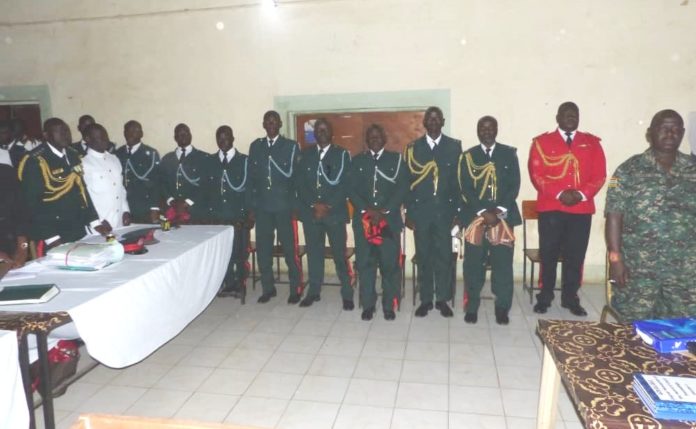 Seven military men who were convicted of treason by a general court-martial will appear today before the Court of Appeal.

They appealed against the court-martial’s decision in which they were all convicted of treason, incitement to mutiny, failure to report mutiny, conspiracy to commit mutiny, Endeavour to persuade members of the Armed Forces to take part in mutiny, Negligent or willful interference with lawful custody, Connivance of desertion, Connivance of desertion and Negligent interference with lawful custody.

The court-martial found these soldiers guilty of 5 criminal offences and sentenced them on various prison terms which will run concurrently starting on the date of their arrest. The soldiers were also dismissed from the army by the court-martial.

They were charged together with Corporal Sulayman Sanyang, Corporal Lamin Gibba, Corporal Ebrima Jallow and Lance Corporal Samboujang Bojang, who were acquitted and discharged in respect to all the charges that they were accused of.

The appellants want the Court of Appeal to allow their appeal and set aside the judgment, findings and convictions by the Court-Martial. They also want the Court of Appeal to make an order to discharge and acquit them. In addition, they want the Higher Court to make an order that the Court-Martial lacks jurisdiction to hear the charge on treason without the consent of the Attorney-General. Finally, they want to be reinstated in their various positions at the Gambia Armed Forces and for their salaries and entitlements to be immediately paid to them. They argued that the Court-Martial convicted them without corroboration as required by Section 38 of the Criminal Code. They argued that the Court-Martial erred in their judgement by relying on transcript audio messages of the ‘WhatsApp’ chat group and held that it should have corroborated other exhibits to prove their guilt. The appellants argued that the said audios were never produced, shown and played in Court to establish their existence, accuracy and authenticity.

In their appeal, the appellants said there was no ‘incitement to mutiny’ on the side of Captain Yahya Beray Jammeh, Sergeant Baboucar Sanneh, Sergeant Malick Bojang, Lance Corporal Abba Badjie, Private Mbemba Camara and Lance Corporal Alieu Sanneh; but that the Court-Martial went ahead and convicted them on those charges.

The appellants appealed that the Court-Martial erred in Law by admitting as evidence, statements of accused persons that was obtained under duress and in the absence of an independent of witness, even though some of them indicated in Court that they were tortured. In addition, they said the statements were obtained without adherence to the established rules of taking statements (Judges Rule). The appellants appealed that the Court-Martial erred in Law when it held that Exhibit ‘N’, ‘O’ and ‘P’ are not computer generated documents and did not fall within the requirement of Section 22 of the Evidence Act. They argued that Exhibits ‘N’, ‘O’ and ‘P’ were statements from Africell, Qcell and Comium and no officer or staff from these GSM Companies were present as witnesses to tender them and further argued that the prosecution did not lay any proper foundation for the admissibility of these documents; that the witness through whom the exhibits were tendered, is a security officer and a member of the investigation panel.

The appellants said the Court-Martial relied heavily on the testimony of tainted witness Dino Sanneh, who was arrested together with the appellants but was released in November 2017 when he agreed to testify against them.