Amid the restrictive measures put in place by government to stop people from traveling into the Gambia due to the Covid-19 pandemic, motorcyclists in bordering vicinities of Senegal are ignoring the restrictions as they continue smuggling travellers in and out of the Gambia.

Both The Gambia and Senegal placed restrictions on the movement of people across their respective borders as part of measures to curb the spread of the deadly coronavirus. But people smuggling across the borders through community routes is still the order of the day.

Travellers continue to avoid formal crossing points as they fear being nab and sent back to their countries. They hire motorcyclist to smuggle them through unofficial routes without undergoing screening.

The spike in COVID-19 cases is scary as the rate of transmission of the infection continued unabated. The Gambia has now recorded an overall total of 326 cases including the country’s vice president who tested positive recently, 66 recoveries, 8 deaths and 246 undergoing treatment as of Tuesday, 28th July, 2020; while Senegal has 9,805 cases of which 6,591 recovered, 198 died and 3,015 are under treatment as of the aforementioned date. 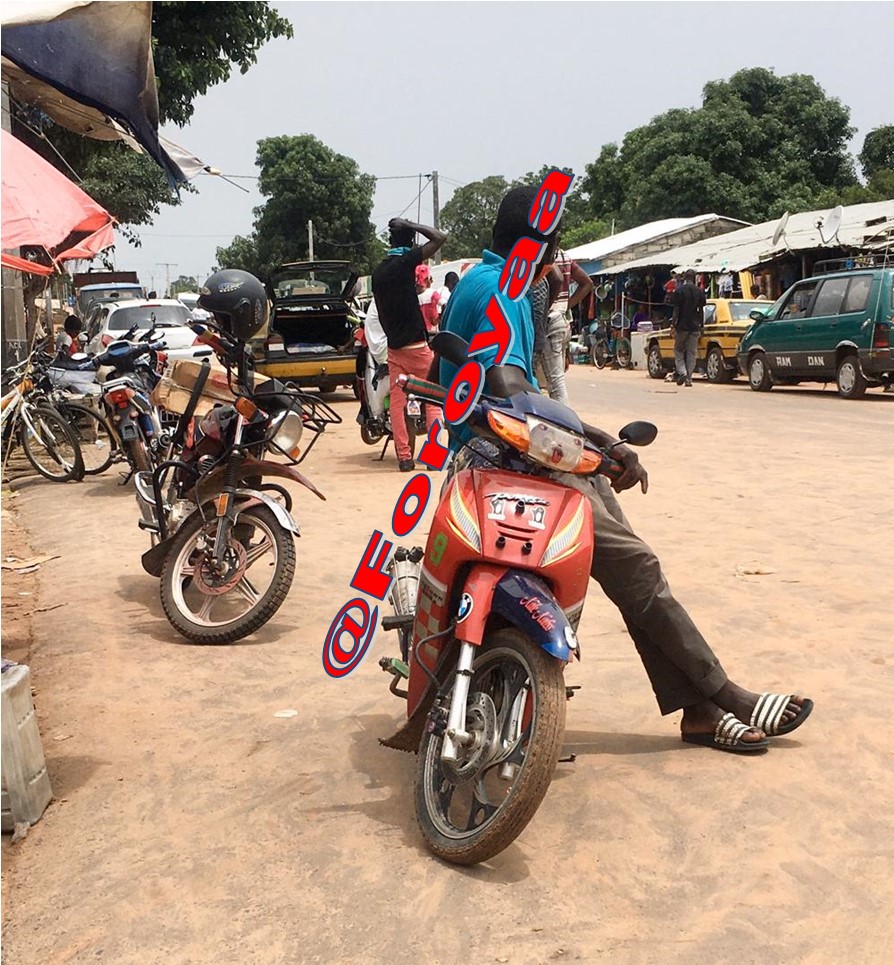 During this reporter’s second visit to the Amdalai/Karang border post, it was observed that illegal activities at the porous border still prevail. Motorcyclists claimed they are “making fast money’’ to feed their families and finance their other needs. 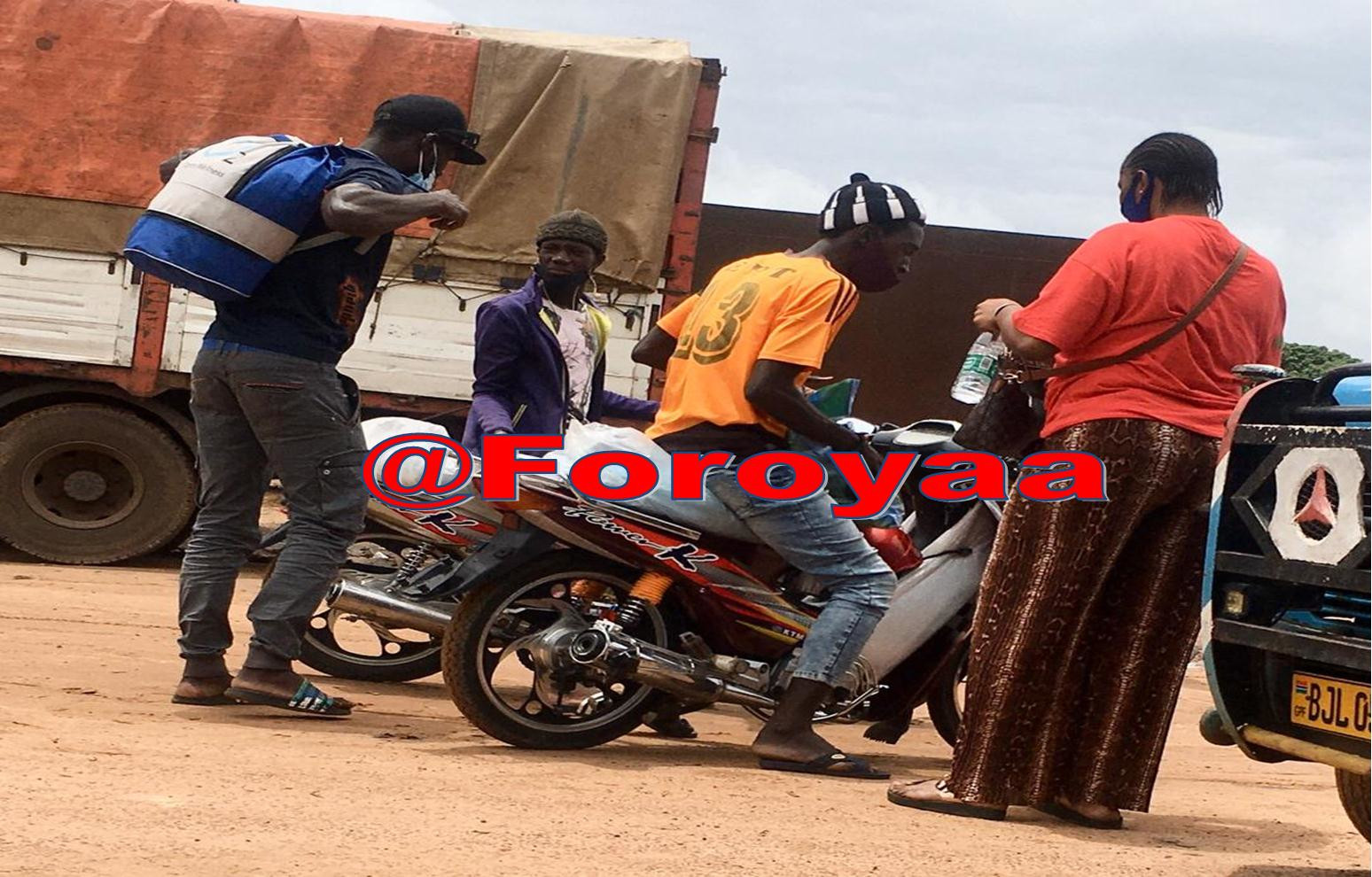 The official entry point at the border is closed but there are hundreds of unofficial routes, which motorcyclists and owners of horse carts resort to on a daily basis in gross violation of covid-19 directives and rules.

Policing the porous border is a nightmare to Gambia’s ill equipped border guards who do not have enough resources to nip people smuggling in the bud. 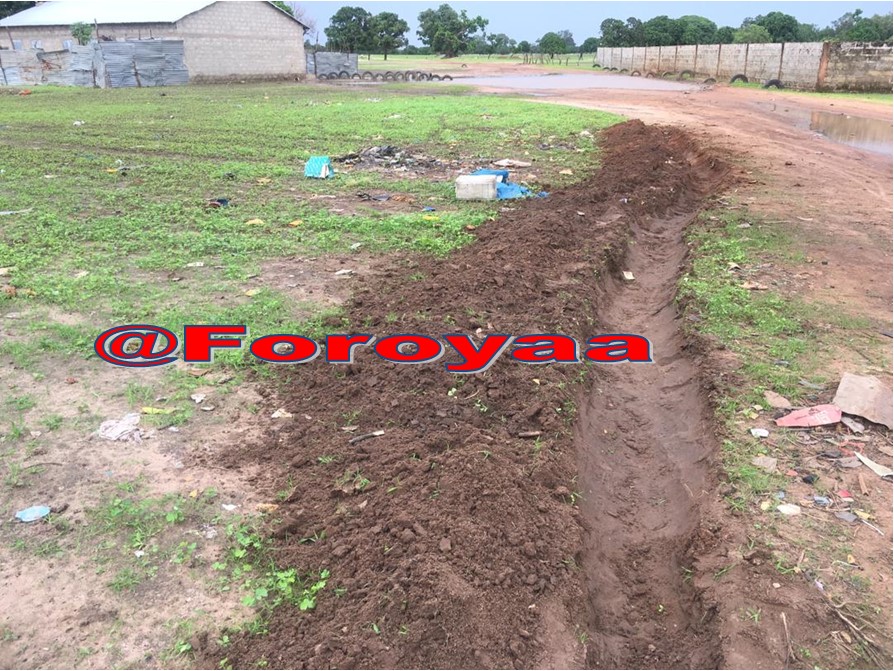 As the Muslim feast, ‘Tobaski’, approaches, the border separating Amdalai and Karang has become one of the busiest places. Senegalese nationals are leaving The Gambia for their country in a bid to spend the Muslim feast with their family members.

The Gambia Immigration Officers mounted four checkpoints at different locations. The first one was situated at Kerr Jarga highway, the second at Amdalai garage- where commercial vehicles offload passengers, the third was at a route in the community and the fourth was at a sub-post facing Karang.

Ebrima Bah, a resident of Amdalai said: “We are disturbed by the motorcyclists. They are using unauthorized routes to smuggle people into the Gambia and Senegal. They use our farmlands as smuggling routes in order to avoid the officers.’’

“You see, I’ve to dig a pit to stop them from using here as a route. We are doing everything possible to stop them from smuggling people into The Gambia and Senegal, but we can’t stop them completely. They are smart youths,’’ he said.

Maimuna Bah a resident of Amdalai said they handed over three smugglers to security agents at the border.

“I’m not a Police officer, but I will work as one to prevent travellers from transmitting this virus to me and my family, especially my children,’’ she said. “If I see illegal activities at border during this moment, I will report it to the authorities.’’

Lamarana Jallow, a resident of Karang called on the governments of Barrow and Sall to empower the security agents by providing them with enough resources including patrol vehicles so that they would put an end to people smuggling between the two countries.

Some of them called on the Gambian authorities to deploy soldiers along the border, arguing that the immigration and police officers do not have the capacity to police the border. 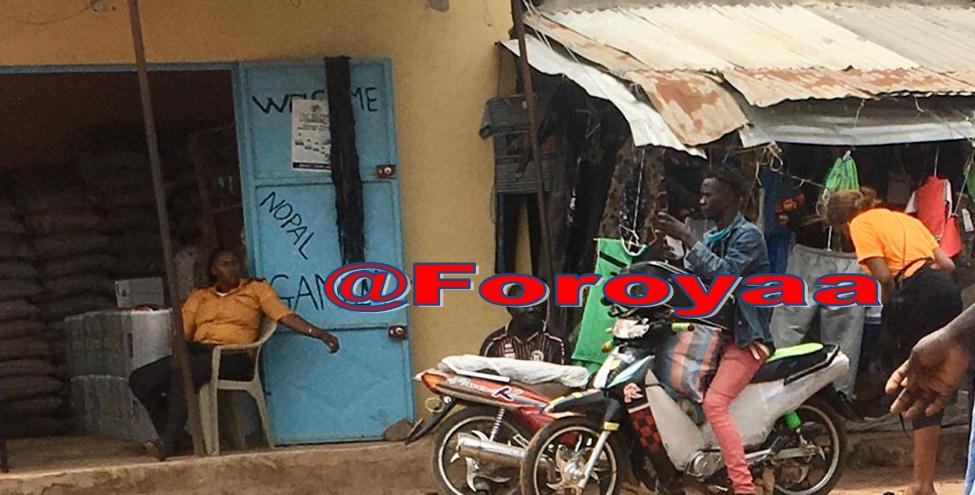 Our reporter observed the presence of Immigration officers and plain clothes officers at a checkpoint. Speaking to our reporter, the security officers expressed the challenges they are grappling with while executing their duties at the border.

“It’s not easy sitting (here) in the bush. Smuggling is still going across the border,” the officer added.

The officer said they learned that motorcyclists, known there as ‘Jakarta’ are using other routes to avoid their checkpoints to smuggle people into the country or Senegal.

“We have a pickup that usually patrols the other routes within Amdalai. Sometime they apprehend bikers while others do manage to escape,’’ the officer said.

The officer said they were able to intercept some motorcyclists, adding the arrestees are still under their custody.

“Some were taken to court and fined as well for violating the border rules. Our problem is mobility. We walk to stop these activities and only one officer among us has a motorbike, so it is not easy to tackle the smugglers,’’ the officer said.

Other officers said those accusing them of allowing people to enter into the country do not know the difficulties they are grappling with at the border. 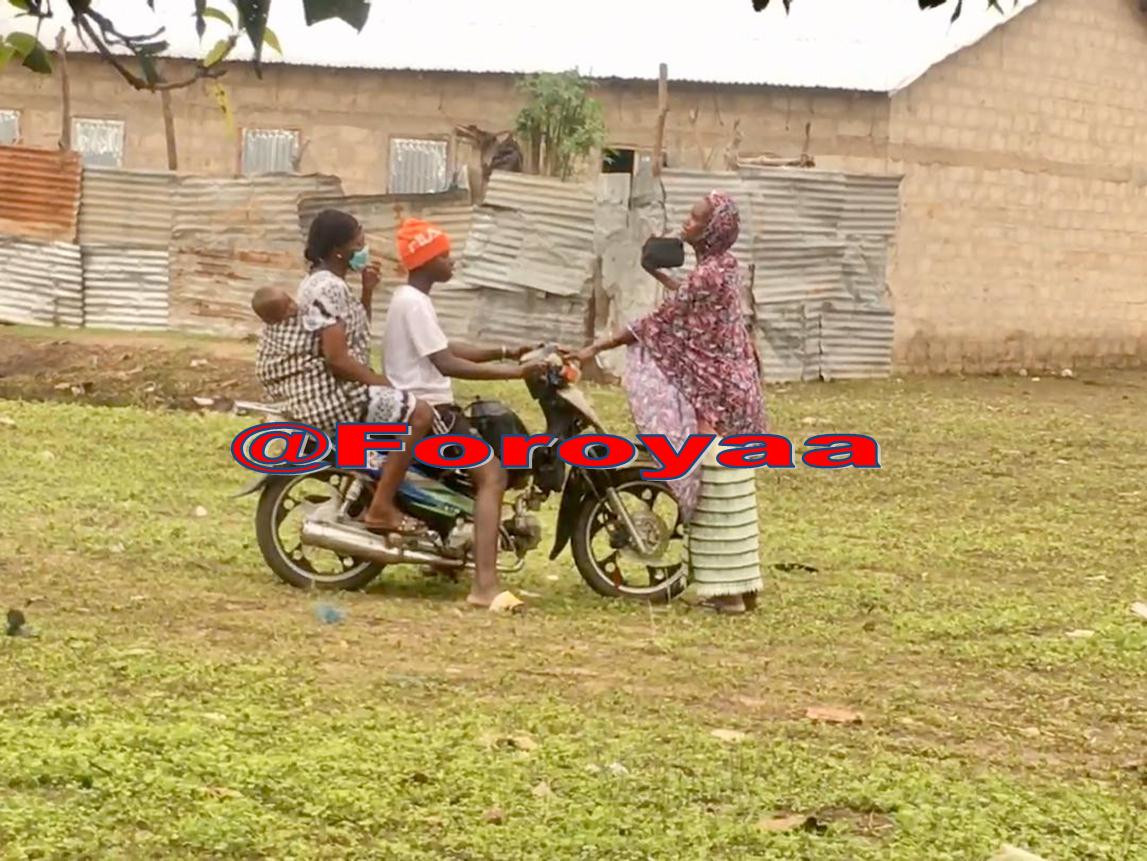 A group of motorcyclists (smugglers) who were found waiting for passengers to be smuggled into the two countries spoke to this reporter on condition of anonymity for fear of being arrested by the officers.

The smugglers accused officers at the border of collecting bribes from them.

“I’m a grade 12 student. This motorbike is the one funding my school fees because things are not easy here,’’ one of the motorcyclist said.

“We cannot leave this job and see our families go hungry.’’ the motorcyclist said.

The biker explained that passengers are charged 5000 or 2000 CFA (D440.00 or D250). However, the biker indicated that there is no fixed price because they are risking their lives using unofficial routes.

“I’ve a wife and kids at home. I have to feed them. My profession is riding a motorbike. So, this place is where I earn my living. But if I’m caught, I will lose the bike and will be fined as well,’’ the biker added.

Momodou Sowe, a health officer at Amdalai said Gambians coming into the country are first processed by Immigration Officers before they are taken for quarantine.

“They have to observe the 14 days quarantine period and if they are not positive, they are discharged. But if they are positive, they are sent to the treatment centre in Banjul. We are treating everyone coming from Senegal as a suspect of covid-19,’’ he said. “We have two quarantine centres in the region (Albert and Sitanunku ‘Jerry-park’) in the North Bank Region, which are big improvements for us.’’

He added: “Sometimes we encounter problems as some travellers do insist they would not be quarantined and would want to escape, but with the support of the officers they (travellers) are apprehended and taken back to the centre,’’ he said. “None Gambians are sent back to their countries and the security officers are helping us in dealing with these issues.’’

He said they have also conducted community sensitisation to ensure community members support them to report smugglers to them or the Police and Immigration, especially the motorcyclists.

For the part of the Immigration authority 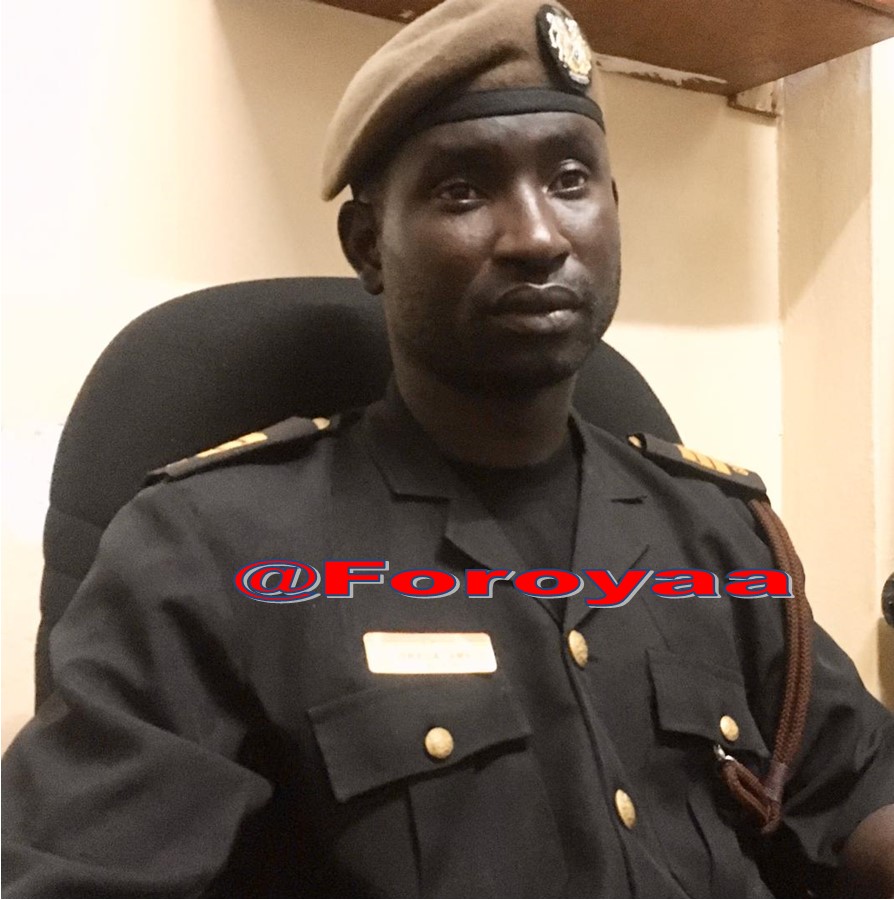 He explained dozens of motorbikes were confiscated by the Immigration in Central River Region.

“When we went there, we engaged everybody, from the Police, Immigration, Customs, Senegalese Gendarmerie and everyone and we were assured that when it comes to the official designated entering points, people are not using them.’’ he said.

“A lot of people were forced out of the country because if you want to send them into quarantine, we will overstretch the resources at the quarantine centres. So, what we do is before they get into Gambian soil, we force them to go back but some of them are smart and know our routine,’’ he explained.

Jammeh pointed out that most of the smugglers have informants who inform them about the whereabouts of the security officers. He said it is a network and they are finding it difficult to break.

Jammeh said any smuggler caught by the Immigration would be prosecuted

Jammeh said any officer found collecting bribe would be dealt with accordingly.

Chief Inspector Jammeh said they have pick up vehicles in almost all the official borders across the country. He however said the vehicles are not enough and this is why most of their officers use motorbikes to patrol the border.

“The reason why we cannot use vehicles in other places is because some of the terrains are not motorable. So, all we can do is to walk,’’ Jammeh said.

Protective gears to their officers on the ground

Jammeh said the government and other organisations such as the International Organisation for Migration (IOM) have donated gloves, face masks, hand sanitizers and other items to them.

He said their officers have been trained on how to deal with travellers during this period of covid-19.