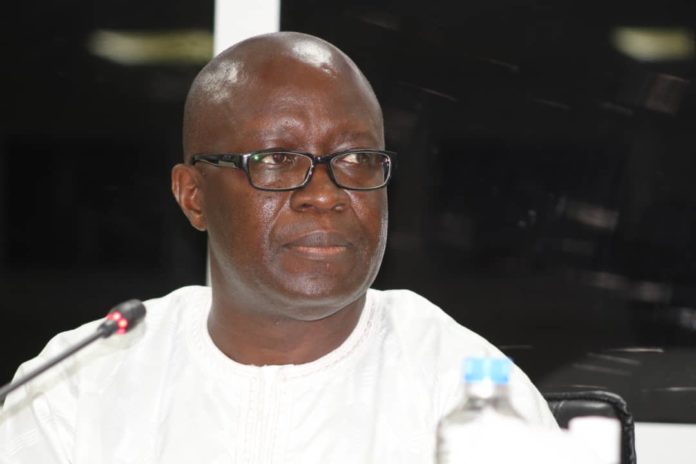 Appearing before the TRRC on Tuesday, Dr. Janneh said he served as a cabinet minister under Jammeh’s regime for fifteen months.

The native of Gunjur said he was in Nigeria representing the Gambia on an official function when he was informed by a GRTS staff that he was fired.

“Three days after my return from Nigeria, I received a letter from the NIA informing me that I was fired,” he said.

He said when he was fired, he was taken to the office by the NIA Officials to collect his materials, but at that time he was not having any of his materials at the office and there was no formal handing over.

The PhD holder testified that while serving as the Information Minister, he was persistent in supporting the media.

The Gunjur born said before he was sacked, he established his technology company and was doing his private business.

In June 2011, Janneh was arrested. He set up the Coalition for Change (CCG) together with some of his friends. He said he was the one doing the underground work in The Gambia while Ndey Tapha-Sosseh was serving as the secretary overseas.

“Because of the repressive character of the government at the time that was why I was working underground,” he said.

The witness said his criticism of the government at the time has resulted in people being tortured, murdered and some sent to exile.

He said he worked closely with the Gambia Press Union before becoming Minister and after he ceased to be Minister.

“It was clear that Yahya Jammeh did not distinguish between students, Imams, Politicians and even his family members,” he said.

The PhD holder said when he established his business, he realised people pay high tax and the money was not in turn put into services instead Jammeh used to spend it on his birthday.

“With this endless spendings, Jammeh tried to also keep the military on his side,” the witness said.

Janneh said their movement was established when there was an Arabic Spring and demonstrations were frequent.

He said they planned to establish a radio station and they received their radio equipment in Senegal.

He said during the celebration of the African Liberation Day at the time he (the witness) participated in a panel at the Management Development Institute with one Madi Joberteh. He said he printed hundred t-shirts with the slogan ‘end dictatorship now’ which was distributed to people.

“It took a few days and no one arrested me and that is how I kept putting on my t-shirt and going to public places,” he said.

The witness said he anticipated arrest, adding the day he was supposed to leave for Dakar to set up the radio station, he was arrested – 6th June 2011.

He said the reason why he knew he was going to be arrested was because he saw people who made innocent statements about the government killed.

He said he knew as a former Minister, Jammeh would not take his activities lightly that was why he was ready for anything.

“On June 6th a group of plain clothes officers came to my office at Kotu and arrested me, but I took things lightly in the initial stage,” he said.

The witness said when he was arrested, he was asked which tribe he belonged to but he refused to answer so officers who wanted to write Mandinka but he told them that if they put Mandinka he would not signed the document.

He said when he was arrested, he was taken to the PIU office in Kanifing where a panel of investigators was set up to probe the issues surrounding the t-shirts.

“One Momodou Bah, Bakaba Suso, Ismaila Mendy, Ousman Top, Sulayman Gaya, Famara Wassa Touray and one Sallah guy were the ones who came to my office and they were not wearing their uniforms,” he said.

He said Foroyaa Newspaper was publishing about the people who disappeared frequently.

He said when asked whether he was responsible for the printing and distribution of t-shirts, he replied in the affirmative and this was when some paramilitary personnel went around the streets and picked up some people who were wearing the t-shirts, beat them and brought them where he was.

Bababba Suso, Farama Wassa Touray and Momodou Bah were the ones beating the arrestees.

He said he was escorted to his office for a search to be conducted by the paramilitary officers. He explained that he almost escaped from the custody of the police, but was caught when he was running to the American Embassy. He said he was returned to the PIU headquarters. He said the number of PIU personnel were increased for his escort and this time, he has no chance of escaping.

He said after the search, a list of people was produced before the panel of investigators who were his associates. He said he was asked to say Halifa Salleh, Njogu Bah, Manlafie Jarju, OJ Jallow, the late Mustapha Dibba and others, but he refused to admit.

He said after the interrogation, he was transported to the airport where he was detained in a room at Old Airport Terminal.

“The cell I was put in was almost all covered with urine, it has poor ventilation and packed with mosquitoes and I was given a plastic bottle to urinate in,” he said.

He said he was allowed to use the toilet once a day. He said he spent five days at the airport under detention.

He said from the airport he was moved to Mile 2 and this time he was receiving help from people outside Mile 2. He said when one of the officers Jumbo saw this, he was moved to Bambadinka in Jeshwang.

“Then I was put in to the cell with my clothes. I think the objective of removing my clothes was to humiliate me,” he said.

He said ‘Bamba Dinka’ is an old building made up of metals and concrete and the place was always dusty.

“The Prison Service was viewed as an instrument of Jammeh and it was definitely Jammeh’s warehouse,” he said.

He said many of the Prison Wardens make their living by exploiting inmates and the prison services.

“When I was taken to court, I was expecting to be convicted regardless of any clear evidence,” he said.

The witness said the medical personnel at Mile 2 were unqualified and there were various diseases in Mile 2.

He said mentally ill inmates were not separated from other inmates. He said some people were incarcerated in Mile 2 and they were not brought before any court of law.

“In adequate education, very low salaries, poor working conditions are all conditions that make prison wardens not to perform well at mile 2,” he said.