Candidates for the upcoming Local Government Elections (LGE) in Sareh Ngai Ward in the Wuli West Constituency, have expressed their determination to make good use of the weekly market dues and other tax revenue, to develop the ward, if given the mandate to do so.

The Candidates made these statements in an interview with this reporter.

Ebrima Danso, Candidate for GDC, explained that he is vying for the Councillorship with a view to mitigate the problems of water, inadequate medical facilities, youth unemployment and road condition, if elected. 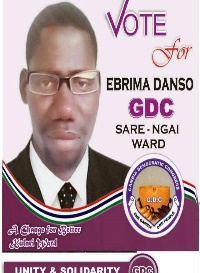 When asked by this reporter how he would help realize this objective, Danso responded that he will utilize the market dues, available projects and 60% of tax revenue paid to Basse Area Council, to make his ambition a success.

“I will utilize all the means possible, to develop Sareh Ngai Ward if I am elected. This has motivated me to contest for the seat”, he added. Danso challenged all to refrain from tribalism, maintain peace and contribute to National Development.

Mr. Lamin Fatty, the PDOIS Candidate, said his Ward has been grossly under represented making it his primary aim and objective to vie for the position of Councilor; that this circumstance prevailed and affected the Ward for the past decades and which he wants to make history, if given the mandate by the electorate.

“I want to rehabilitate and improve the conditions of the weekly market (Lumoo) in the area, because this serves a source of livelihood for cross border trade and traders within the country and beyond. I will make sure that market dues and other tax revenue, will be judiciously used to accomplish this mission, if am elected”, Fatty emphasized.

He described the deplorable condition of the market, especially during the rainy season, as an eyesore and pledged to improve it through collaboration with Basse Area Council, NGO and projects, his party and other development partners.

Several efforts were made to ascertain the views of Nfamara Sabally, the GMC Candidate, which proved futile as he could not be reached on telephone. Extra effort will be made to obtain his version and the readership will be adequately informed.

See the next edition of Foroyaa for interviews with the candidates in Garawol Ward in the Kantora District.