Residents living east of the Bakoteh dumpsite were on Sunday forced to vacate their homes after the dumpsite caught fire.

People locked their houses because of the smoke that was emanating from the dumpsite. Bakoteh Dumpsite is located in the midst of compounds and is directly opposite the SOS Children’s Village. 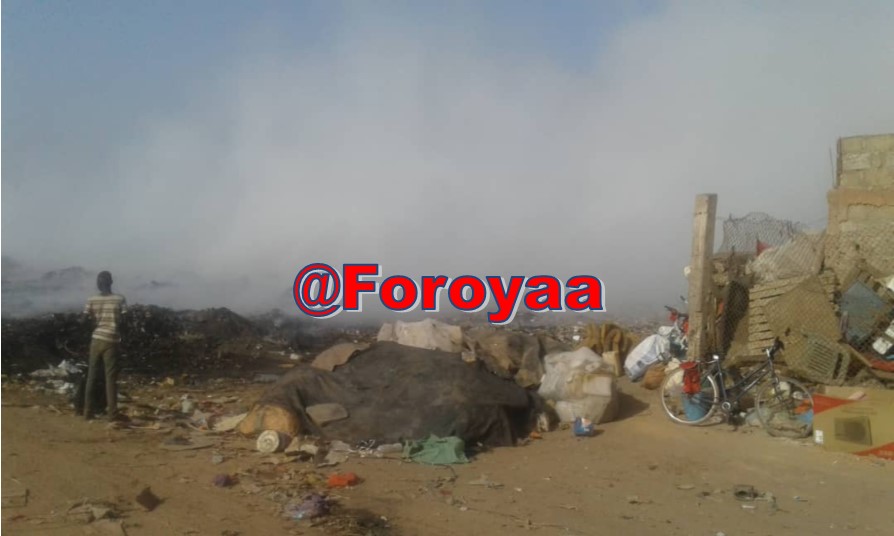 Talib Bensouda, the Mayor of KMC, who was on the scene of the incident, called on the Ministry of Local Government and Lands to allocate a new area for dumping purposes.

Mayor Talib Bensouda said he was told that the fire was caused by children who came to the dumpsite to play.

He told Foroyaa that the Bakoteh dumpsite is not fenced and his Council will fence it this year in order to secure the area.

“There is a lot of rubbish here. The site is not sustainable anymore,” he said.

He said he wants the Ministry of Local Government and Lands to allocate a new area for dumping. He said this is the first time this year that the dumpsite catches fire.

He added that March to June is the dry season, and usually when the fire starts it goes out of hand.

He said they have told the Ministry that Bakoteh is no more sustainable for a dumpsite and they should allocate another area for the Municiplaity.

“We have informed them and we are waiting on them,” he said.

In response to the reporter’s question regarding how soon this will happen, Mayor Bensouda said he is waiting on the Ministry and he can’t give a specific time.

Ndey Mboge, a resident in the vicinity said the incident began around 10 am. She told Foroyaa that they called the Gambia Fire and Rescue Services (GFRS) to come to their aid, but the rescuers came late. She said when the firefighters came, they came with their vehicle and they couldn’t extinguish the fire.

Alagie Drammeh said the fire was not caused by any child.

“It was caused by the people who find metal scraps. They burn metal to get what they want from it,” he said.

One Fatou Sanneh said they want the government to provide them with a final solution because they are suffering. She said the government has always neglected them even though their health is at risk.

Lamin Conteh said he lives near the Bakoteh Police Station which is a bit far from the dumpsite.

“Every day we have to inhale smoke. We are tired and we want the government to intervene because our health concerns should be their priority,” he said.

Sewer jetting trucks were used to fight the fire as the two fire service vehicles that were on the ground ran out of water.