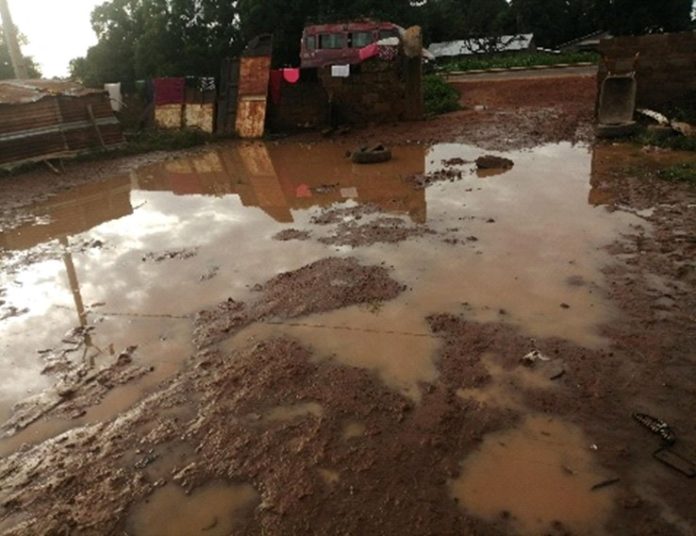 Omar Walliba Baldeh, a household head in Samba Tacko told this reporter that his home suffered from the heavy floods due to a blockage of water way by the road construction.

“I never experienced flood like this before. But due to the blockage of waterways during the construction of the road, the runoff water has nowhere to go but to flood compounds and destroy everything therein among them foodstuff, cement and also three vehicle engines that I bought D70,000 each, as spare engines for my vehicles, because I am a driver,” he said.

He however thank the Almighty that there was no human casualty, and as well acknowledged the efforts made by personnel from the Basse military barracks for their timely intervention when his entire compound was fully flooded.

According to him, the Governor of URR Samba Bah and the Chairperson of Basse Area Council Foday Danjo, visited him including other flood victims.

In Baja Kunda village, one Bajaha family was severely affected by the floods. Mahamadou Bajaha, the household head of the affected family, told this reporter that he had never ever seen such a flooding in his life. He narrated that despite the concrete fence surrounding the compound, the heavy deluge hit the backyard and immediately flooded the whole compound with the water entering houses and destroying all their belongings including foodstuff.

When contacted to shed light on the above, the National Disaster Management Coordinator for Upper River Region Huddle E.M. Colley confirmed to this reporter that over ten communities were affected by last Wednesday’s heavy downpours. He however indicated that among the communities of Kabakamma, Girroba Kunda, Samba Tacko and Baja Kunda were hardest hit by the flood.

According to him there even some farms have been inundated the heavy downpour.

When asked whether there is any immediate assistance set for the victims as a rapid respond from the NDMA and partners, Colley replied:

“After our initial rapid assessment with the Governor of URR and chairperson of Basse Area Council, the Red Cross and others, we conveyed a meeting and immediately advised Council to do something for the victims as soon as possible. Upon receiving this advice, the Basse Area Council reacted by donating bags of rice and cooking oil to vulnerable and affected households the same day,” Colley asserted. He disclosed that the NDMA Regional office in URR has sent a situational report to the national level and have also shared the same report with their partners in the region, for all assistance to be based on the assessment and situational report they have done, which indicates the immediate needs of the victims; that the situational report also included bedding materials like mattresses and wash items like detergents and soap for the prevention of any disease outbreak.

Colley emphasised that they will ensure that the relief assistance approach is well coordinated.

“We want to ensure that the situation is well coordinated in order to respond to the problems of the victims on a wider scale. The NDMA is working closely with Red Cross to coordinate this issue,” NDMA’s regional coordinator said.