CAN SOMEBODY TELL US WHAT IS GOING ON? Mountains of rice and sugar are in the hands of Councilors of...
Read more

QUESTION OF THE DAY According to the Epidemiology and disease control unit of the Ministry of Health, 25 persons have...
Read more

By Sulayman Bah The Gambian domestic premier league has seen it all; from strikers who’re late boomers, the skill-lacking but...
Read more

This Column is devoted to monitor and report on issues that relate to production, processing, preservation and marketing of agricultural produce, aimed at ensuring food security in the Gambia, as well as the interventions of Government and Non-governmental Organizations in this regard.

Agriculture remains both a new and old source of national revenue and (youth) employment. Improved public awareness and discussions on the issues involved, will significantly maximize agricultural outcomes and the contribution of the sector to economic growth and job creation. 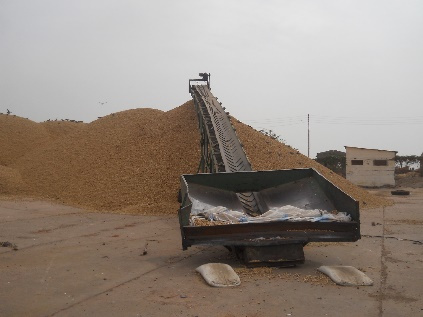 Despite being the main livelihood for the majority of Gambians, agriculture continues to be marred by low input farming systems, with the majority of small-scale farmers not using improved seeds and fertilizer among others. These coupled with the labour intensive and drudgery in tilling the land, limits factors to increase the production and productivity of the farming community in The Gambia.

Hence, farming in the Gambia largely depends on human and animal power, and this greatly hinders the timeframe of farming operations. Therefore, this makes the development of agriculture particularly land preparation, weeding, harvest and post-harvest processes and activities, a major challenge for farmers in rural Gambia.

In the last edition, we highlighted information on the Gambia Cooperative Union (GCU), and on the lending of cash, and provision of fertilizer and seeds to Cooperative Produce Marketing Societies (CPMS), by the GCU.

According to a press release issued by the Department of State for Agriculture, the Gambia Cooperative Union incurred a liability of 209.5 Million dalasi and was in possession of assets amounting to 25.9 million dalasi. The financial crisis which gripped the Cooperative Union became evident in a report called: ‘Diagnostic Study of The Gambia Commercial and Development Bank’ submitted by Robert R. Nathan Associates, Inc. in June, 1988.

The study indicated that GCU was the largest purchaser of groundnuts in the country; that used to supply the former Gambia Produce Marketing Board (GPMB), with 80% of its groundnuts; that the

Union is said to have operated through formal registered primary cooperatives societies; that the societies grew to 1,986.

According to the report, many of the 1,986 Societies were opened under political pressure; that GCU lent to CPMS which in turn lends directly to farmers. The Report spoke about the difficulty that GCU had in servicing its debts with the Gambia Commercial and Development Bank.

According to the Report, as of March, 1988, GCU’s indebtedness to GCDB was as follows:

Total- D53,279,000; that these loans made GCU the Bank’s largest borrower, and this particular customer’s debt represented 24.7 percent of the Bank’s entire loan portfolio as of March 31, 1988.

The Managed Fund account for GCU which government accepted to take over is as follows:

Hence by 1988, outstanding debt of the GCU was over 85 Million dalasi.

The PPP regime ignored the Diagnostic Report and did nothing to reform the Cooperative Union until the scandal of 1993, which indicated that GCU had only forty dalasi in its coffers, and owed over D20 million dalasi at Standard Bank; that it had to acquire a loan of D6 million from the Social Security and Housing Finance Corporation with 22% interest, to purchase farmers’groundnuts, during the 1993/94 trade season.

CAN SOMEBODY TELL US WHAT IS GOING ON? Mountains of rice and sugar are in the hands of Councilors of...
Read more
- Advertisement -
Burning Issues

QUESTION OF THE DAY According to the Epidemiology and disease control unit of the Ministry of Health, 25 persons have tested positive.18 have recovered and...
Read more
Sports

By Sulayman Bah The Gambian domestic premier league has seen it all; from strikers who’re late boomers, the skill-lacking but yet proven goal-getters to the...
Read more
Health

Observing the feast of Koriteh in Sami in a new way

By Ansumana Touray May 23rd and 24th 2020, marked the observance of Eid ( Koriteh) prayers in the Gambia amid the prevalence of COVID-19 pandemic....
Read more
- Advertisement -

By: Abdoulai G. Dibba The Gambian economy largely depends on Agriculture however inadequate budgetary allocation is hindering food security in the country. A rice fields in...
Read more

Farm-Gate Price Of Gnuts Will Be Announced In December

Abdoulai G. Dibba The president has said that the farm gate price of groundnuts for this year will be announced in December. The President made this...
Read more

Farmers In Basse Appeal For Markets For Their Produce

By Lamin Fatty Farmers in Basse have appealed to Government for good market and prices for their farm produce and for the timely supply of...
Read more

Abdoulai G. Dibba Secco Managers have called on the Government to announce the farm gate prices of Groundnut one month before the start of the...
Read more
FOROYAA Newspaper is your premier Gambian community portal delivering news on politics, legal affairs and more. We provide you with the latest breaking news and videos straight from The Gambia and the rest of the world.