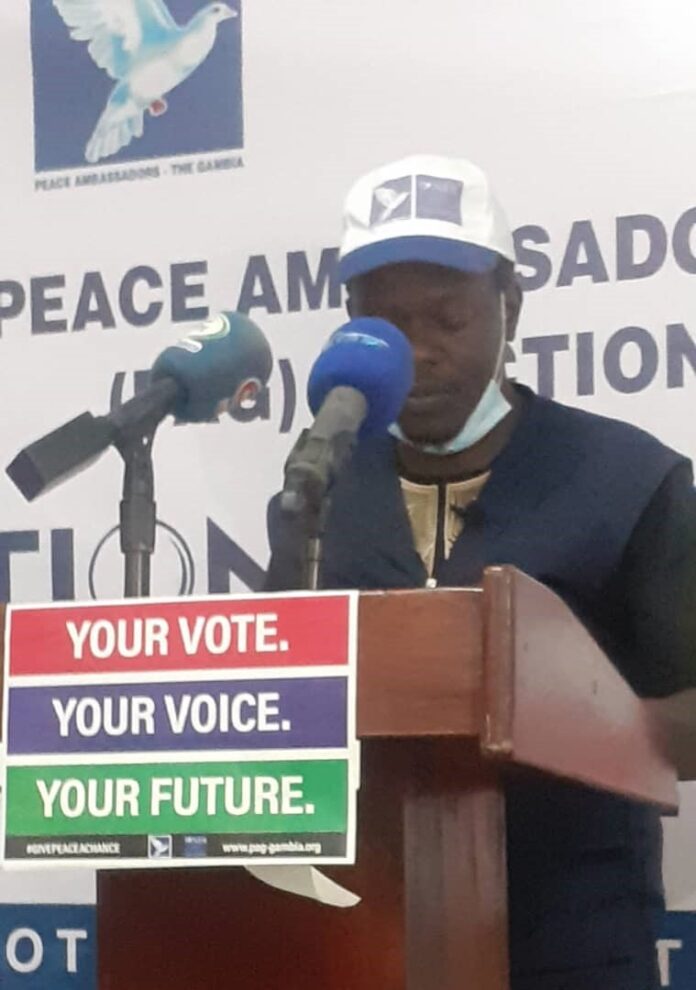 Peace Ambassadors-The Gambia (PAG) has on Saturday 5th June 2021, pointed out to the press some hitches their observers reported to have witnessed at the voter registration centers.

PAG on 29th May 2021, deployed 59 trained observers across the seven (7) administrative regions and 53 constituencies of The Gambia to observe the voter registration process. The voluntary non-profit peace education and advocacy organization operating in The Gambia, Senegal, and Guinea Bissau, also all their observers were accredited by the IEC and permitted to observe.

Yankuba Manjang, the Executive Secretary of PAG, said the overall reports from PAG observers from all 53 constituencies show that registration is progressing across the country and registration officials are following most of the registration procedures.

However, he said: “There have been challenges with the functioning of registration equipment such as printers and laptops which have caused the early closure of some centers, but these have not been widespread. It was indicated that security personnel and political party’s agents are being deployed across the country to observe the process. Nevertheless, it was noted by PAG observers that registration staff appear to be inconsistently applying for the registration procedures in some centers and security officials are likewise inconsistent in enforcing the COVID-19 regulations.”

Manjang said PAG report provides comprehensive information on reports from all PAG observers during the first phase of the voter registration observation (29 May to 2 June). He said all 53 constituency observers submitted reports each of the three days during the first reporting phase, reflecting their observation at 119 unique registration centers.

“Due to the small number of registration centers in some constituencies, some observers reported from the same center on multiple days,” he added.

PAG executive secretary further said out of the total of 59 reports received by observers during the aforementioned phase, 142 reports constituting 89% indicated that the center opened on time- that is between 8:00 to 8:30 am- with the remaining 17 constitute only 11% opening after 8:30 am. He said generally, during phase one, PAG observers reported that many centers that opened had the staff and materials required and remained open throughout the day.

Manjang said the IEC in its 2021 voter registration training manual included the implementation of the COVID-19 safety guidelines as provided by the Ministry of Health and World Health Organization (WHO) at all registration centers, which he said, was observed by the IEC officials.

“124 of 159 observer reports show that the IEC officials wore face masks during the implementation of their duties while only 35 reports show that IEC officials did not wear the mask during the conduct of the process. In the same manner, a total of 46 of 159 observer reports reflect that security personnel always enforced the COVID-19 regulations at observed registration centers. While 84 of 159 reports show that security present sometimes enforced the COVID-19 regulations of handwashing, temperature cheeks among other measures dung registration,” he explained.

Manjang also said PAG observers’ reports indicated that registration officials followed most of the registration procedures, such as requesting applicants to present a valid identification before being registered, having applicants affix their thumbprint or signature to application forms to certify that their information was correct, the operator inputting the data of successful registrants, as well as giving priority to people requiring assistance such as pregnant women and persons with disabilities.

“PAG encourages security personnel to consistently enforce the COVlD-19 regulations at various registration centers assigned in order to ensure that the general public is protected against the conduct of this voter registration exercise. Security services such as immigration and police should remain vigilant in the conduct of their services so as to keep an eye on illegal registration as well as speedily intervene during instances of violence and disruption,” he said.

Meanwhile, the aforesaid report was PAG’s second update, which covers the first phase of the voter registration exercise from Saturday, 29 May 2021 to Wednesday, 2 June 2021.