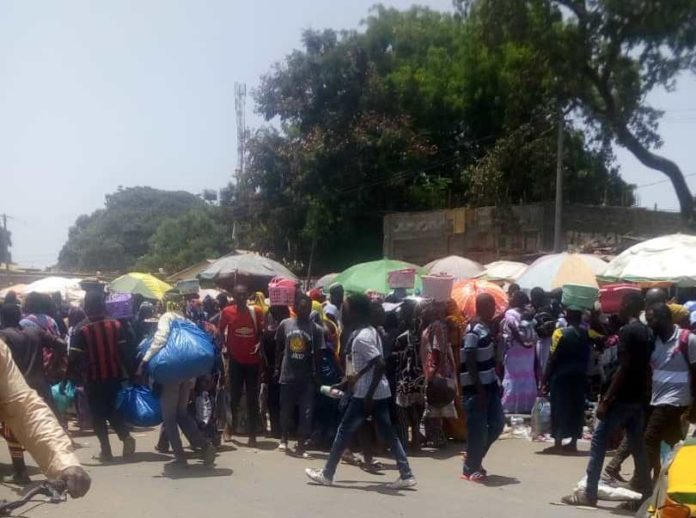 Many people are still not following the Emergency Powers Regulations on safe spacing (social distancing) or gathering, especially at very busy places like markets and commercial car parks, particularly during the rush hours of Ramadan.

This reporter observed that a lot of people were gathered together at the Brikama market and the car park, without observing safe spacing (social distancing) in an effort to fight the corona virus, covid-19.

A multitude of people could be seen without face masks and some shook hands with each other contrary to the Gambia’s ministry of health and WHO guidelines.

Dr. Bojang a resident of Banjulunding who was at the market at the time, said this is a very serious problem the country is facing in the fight against the pandemic, adding that safe spacing should remain compulsory for all residents of the Gambia and that everyone should play their part in reducing the spread of the virus. The importance of social distancing is to avoid a sharp peak of infection, he concluded.

Alieu Jeng a businessman at Brikama market said he is concerned about the situation at the market because a lot of people converge there on a daily basis and no one knows who is infected or carries the virus.

According to him, Brikama is a cosmopolitan town and people come from everywhere including Casamance and Kombos.

Malang Fatty a driver who plies between Brikama and Serekunda, said traffic congestion is causing transport problems because they spend a lot of time on the road. According to him, traffic jam waste their vehicles fuel and they run into losses because they are allowed to carry only half the number of passengers prescribed in their licences.

He also said that because of these conditions, many drivers decided to ply short routes.