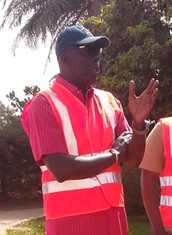 The new Minister of Petroleum and Energy, Abdoulie Jobe, on Saturday, May 7, 2022 conducted a familiarization tour on both NAWEC’s water and power stations in the greater Banjul area.
The visit was aimed at assessing the challenges of NAWEC to have firsthand information of the company’s constraints in order to be able to provide solutions for those challenges.
The minister together with his permanent secretary, Lamin Camara, as well as the management of NAWEC and the media—visited Kotu power station, Sukuta power station, Jabang substation, Brikama water plant, Brikama II 20 MW power plant, Brikama dispatching substation and the OMVG project site in Brikama.
Speaking to the press, Minister Jobe acknowledged NAWEC for the tremendous work they have done over the past five years, describing the company’s infrastructural development as impressive.
He said the work of NAWEC is in progress and promised that they will work diligently to ensure that water and power supply in the country is fully addressed, adding that major challenges will be equally minimized to avert damages.
“There are challenges but as we work together, we would improve the quality of water and power supply in terms of the consistency and quantity for the people of the country,” Miniter Jobe asserted.
The energy minister encouraged the managing director of NAWEC, Nanny Juwara, and team to look after the welfare of workers.
“You should not only look after the generators and the transformers but also look after the workers. The workers are as important as the engines because when the workers are happy, then the engines are looked after properly. People need to be motivated, be encouraged and they should be given the space to perform,” he said.
Mr. Jobe affirmed Government’s commitment to work diligently and provide the services to the public, saying that as the supervising ministry, they have an arms length approach and that they will provide a strategic policy direction which NAWEC will implement.
On the aspect of individuals who steal and tamper with NAWEC’s copper cables at various boreholes in various communities, Minister Jobe stressed that the director responsible for water should take a legal framework and his ministry will as well come up with a bill to present to the national assembly to ensure it criminalizes anybody who disrupt national property.
“I was informed that NAWEC is working with the ministry of interior to take necessary steps in order to secure and safeguard our facilities. Those things do not belong to NAWEC, it belongs to all of us because Gambia has the responsibility to safeguard what belongs to the Gambia,” he lamented.
He further said as part of NAWEC corporate social responsibilities, they will conduct public education in various communities to enlighten them about community policing in order to protect these properties.
At all the sites visited, the minister mentioned the need for cleanliness and proper maintenance of the facilities as cleanliness is among his major concerns because they are into water management.
At Kotu Power Station, the energy minister tasked them to provide his ministry with a schedule of activities and a situation report, explaining their challenges and needs.
Upon the team’s arrival at Jabang substation, the minister found them replacing the faulty power transformer with a brand new 5MVA transformer which was manufactured in India by Telawne power equipment private limited.
The new power transformer will improve the electricity system and also offload power from Bijilo substation, Wellingara and Medina—near the Brikama forest in order to reduce load on those power stations and ensure regular power supply to the general public.
Abdoulie Jobe was recently appointed by President Adama Barrow as minister of petroleum and energy, replacing Fafa Sanyang. Jobe who studied mechanical and water resource engineering, once served as Managing Director of NAWEC during the regime of former president Jammeh. 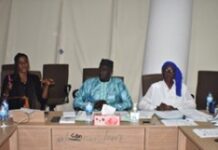 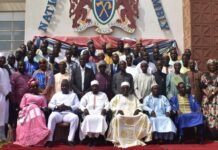 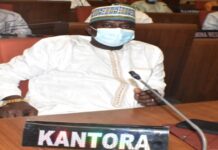