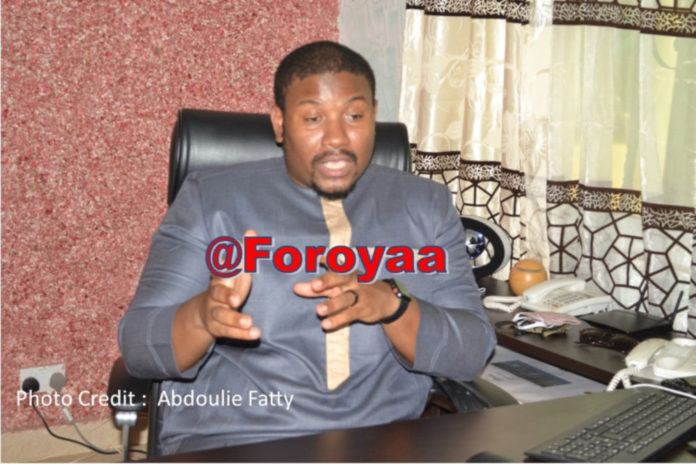 Talib Ahmed Bensouda, the Mayor of Kanifing Municipality has called on the central government to support councils by divulging some of its powers and revenue to council.

In an exclusive interview with Foroyaa on Thursday, Mayor Bensouda talked at length about his council’s activities in the fight against COVID-19, their constraints and their challenges to implementing their development programmes. Here is the full verbatim interview between our report and Mayor Bensouda.

Foroyaa: Do you have any guidelines for the food distribution?

Mayor Bensouda: Yes, the taskforce set-up a guideline. If I can remember a few, we were targeting the vulnerable including the people living in swampy areas, people who are heads of households and are single mothers, and the disables. There was a criterion we used and our monitoring team ensured that the right people got the food aid.

Foroyaa: How many households were you targeting?

Mayor Bensouda: That exercise targeted ten thousand (10,000) households. Recently, we are working with the central government for national food aid relief. Our councillors, in partnership with the alkalos will be distributing that food aid as soon as it is available.

Foroyaa: So apart from that, is your Council collaborating with central government on other things?

Mayor Bensouda: yes, as I said earlier, the Ministry of Health is part of our taskforce. Initially, it was difficult but recently we have seen more response from central government. Just like I said, recently we are partnering with them for national food aid relief for the people of KM (Kanifing Municipality).

Foroyaa: What Challenges are you facing in the fight against COVID-19?

Mayor Bensouda: The biggest constraint we are facing right now is the financial constraints. As you know, Council survives from business licenses, property rates and market duties and the shutdown has affected many people’s income both individuals and businesses. They are finding it very difficult to pay their taxes. So of course, finance of the Council is suffering and we don’t have the luxury of getting grants like the central government or credit from other countries. So is a very tough time for the local government. Like I said, we appealed to the Government to support councils from some of these grants they are getting to make sure that we also are subvented to be able to deliver the services to the people.

Foroyaa: Are you not subvented by central government?

Mayor Bensouda: We are not subvented yet. So far, none of the councils is subvented.  All of them are really hurting right now and are finding it difficult to maintain services. We know the central government said they will work on a package for councils, but we ask them to please fast-track it because it is very difficult for all councils across the Gambia.

Foroyaa: How do you plan to overcome these challenges and are you also thinking about tax reduction after knowing COVID-19 has hit businesses?

Mayor Bensouda: We assessed it but unfortunately for us, we don’t have any grants –outside support. So any dalasi we let go that might be a dalasi that we sacrifice to pay somebody’s salary. So hope the central government will come and support us. If we get subvented by the central government, these are all initiatives that are possible including business license relief, tax relief and duty relief for the people of KM.

Foroyaa: What success story do you have to share with our readers in the fight against COVID-19?

Mayor Bensouda: I think the responses of the council (KMC) have gone a long way in the fight against COVID-19. The moment Senegal announced their first case, our council was the first council in the country and the first government institution to have a public sensitisation campaign about COVID-19. We are the first to distribute hand wash stations widely within the municipality. I will say this is a big success story and also, we are the first institution to do food relief for the people. So I think these are successful stories in the sense that awaken other councils and other institutions to also think about the same initiatives. We can only do it in KM but if we can set an example for the rest of the Gambia, this is something we are proud of.

Foroyaa: How many communities have you reached out to?

Mayor Bensouda: We have reached out to all nineteen (19) wards within the municipality. As you know, every ward is represented by a councillor and has a ward development committee. The members are the alkalos, the imams, lady councillors and youth leaders within that community. So, I as the Mayor or the admin, we are not responsible for this distribution. The community leaders who know their communities best were the ones who distributed it based on the task force guidelines and monitored by our admin department and services unit.

Foroyaa: The issue of social distancing is much talk about. Is it something difficult to enforce?

Mayor Bensouda: It is an extremely difficult thing to execute (enforce). I think even the first state of emergency when there was the public gatherings declaration from the executive (Government) – they had the public gatherings banned, I was the first and I think I might be the only politician who came out to ring the alarm bell and say the public gathering ban is not being respected by the people and we want the executive to increase their enforcement. Council has very limited enforcement capability and this is why we always try to partner with the central police. We have seen that 21 days have been extended and the markets are still overcrowded. People are not still taking the issue of social distancing very serious. Once again, I appeal to the central government, if need be, they can solicit the support of security services including the army to come and increase the manpower of the police and just try to enforce especially the market. I don’t think closing markets totally is the best solution since most of our people depend on the markets for their daily living. If they partner with councils, we can come up with solutions where we create spaces for vendors one to two meters apart.

Foroyaa: Apart from the fight against COVID-19, the issue of the bad drainage system is another concern. in 2017 alone, about 400 households were destroyed within your municipality. What are your plans for the drainage system since the raining season is fast approaching?

Mayor Bensouda: Annually, the Council embarks on what we call operation to clean the drain. We conducted it in my first year in office in 2018 and again in 2019. We were planning it again this year. However, due to the constraints of resources, we are trying to target it at a limited basis to focus on areas that have the highest impacts. So this year we have decided to move the drains out (leave it out) and focus on the canal which is the Kotu Stream which is the cause of most of the flooding. The Canal runs from Kotu and empties in Abuko. So, we plan to dredge that Canal with excavator before the rainy season. The exercise, unfortunately, cannot be as widespread in scope as the years before due to financial constraints.

Mayor Bensouda: Absolutely it is going to affect it and this is why we have been calling for decentralisation. The authority to do physical planning, the authority to zone within the municipality, the authority to allocate land and to revoke allocations – I mean these are powers that every city and municipality should have. That should be under the control of the council and that is why we keep advocating for central government to decentralise power and to empower the councils to conduct these services because we are in a better position to plan our cities and municipalities because we live in them and we know our cities, we represent the people and we know what they want.

Foroyaa: On the issue of car parks, almost all of them are on the highways and they contribute to traffic congestion. Do you have any plans regarding that to create car parks within the municipality?

Mayor Bensouda: This is part of our plans but we have to have the powers to be able to do physical planning. We have to have the power to allocate land. One of the ideas was to conduct public-private partnership for people willing to invest in car parks and charge a little fee for people to park. This is why we keep saying, we need central government to divulge some of these powers to the councils and also, we need to be subvented. Councils have very limited sources of income. When you look at other countries you will see that councils have shares from the sales tax and sometimes utility tax like NAWEC, but in The Gambia councils only have three areas that they can get funding from; that is the licensing, market duties and property rates. We need the central government to divulge some of its revenues to councils.