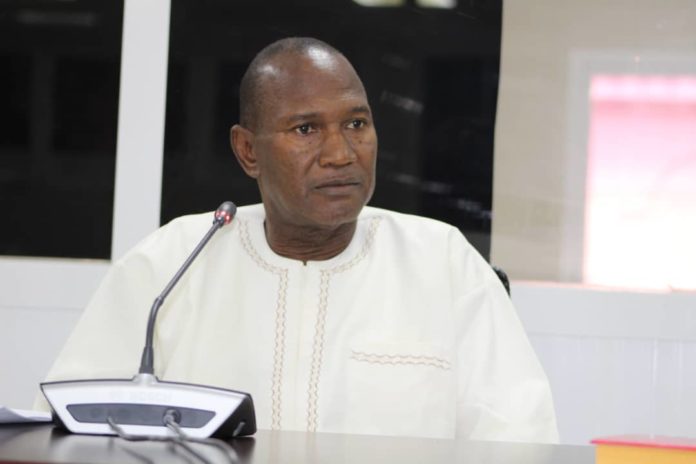 Teeing off his testimony before the Truth Commission (TRRC) on Thursday, David Charles Colley claimed he was an expert in prison law- an accolade he said he knew better than anyone else.

But amid few hours encounter with the Commission’s Lead Counsel, Essa Faal, Colley took everyone by surprise for placing an Executive Order above the Constitution of the country.

Colley, who joined the country’s prison service in 1976, climbed to the topmost rank of Director General of the prison service- a position he used to abuse his authority according to the testimonies before the TRRC.

Colley is being accused of stealing food rations meant for prisoners, torturing inmates, taking bribes, bringing a dead bull to Mile II prison which was cooked and served to prisoners and led to three deaths, among other allegations.

When asked to explain how they admit prisoners, Colley described two types. He said prisoners who were brought in as convicts came with warrant stating their offences. For detainees, most of whom were brought in by soldiers, he said they would be asked to keep them at the main yard until the following day.

Lead counsel Faal read the prison law which says “a prisoner shall not be admitted to a prison unless accompanied by a remand warrant, a warrant or order of detention, a warrant of conviction or of committal or an order of a court martial.”

Asked whether he knew the meaning of that clause, Colley said the clause says a remand prisoner or a detainee prisoner has to come with a convict warrant or document.

Faal simplify the clause to him, stating that it says a prisoner shall not be admitted unless and until the aforesaid documents are produced.

This means whether the prisoner is a convict or detainee, the person shall only be admitted into prison when either of the aforesaid documents is produced.

Colley later admitted that the clause did not say they should keep a person in prison without producing document.

But you were receiving people in violation of the prison act, do you agree, quizzed Lead Counsel Faal.

Colley said the detainees who were brought in by soldiers came in at night and he closed by 4pm.

He said if the prison officers “dare to play their role, they would tell you look, are you receiving this detainee or you are not receiving it, we want to know.”

Faal told the witness what he was describing was untrue and in fact, he wanted to extricate himself from the matter.

Pushed hard by Faal that he was conniving with the State authorities to violate the rights of Gambians that’s why they were bringing detainees at night, Colley yielded and said he dared not say no.

He said the soldiers were bullying the detainees, so no prison officer dared to risk their lives.

He said he knew what he was doing was unlawful but it was fuelled by the situation they found themselves at the time.

Told by Faal that he was complacent and was a happy participant to the plethora of rights violations under that regime, Colley vehemently denied that allegation.

“You could have resigned,” Faal hinted. “How can I resign?” Colley replied.

When told that he continued that unlawful act and he was happy to be the prison man of former President Yahya Jammeh, he answered in the negative.

Colley said he does not receive prisoners, something he said his director of operation, one Lamin Sowe, can vouch for him.

But Sowe said otherwise in his testimony. Colley said his director of operation was not telling the truth.

Regardless of Sowe’s testimony, Colley maintained that soldiers used to come to Mile II prison without his directive. He said the soldiers used to take the back-way to the maximum security wing.

The former Prison Service DG admitted to have surrendered Mile II prison to the National Intelligence Agency (NIA), but he insisted that he was in charge of the prison.

Reading from his statement, Colley said “it is stipulated in the prison act that inmates can be handed to the NIA for investigation and interrogation at any time of the day or night.”

Commenting on his statement, Colley said it is an order.

He was given the prison act to show the Commission the part that suggests his proposition.

Colley instead said his proposition is not in the prison act after earlier waffling that he received a letter written by his Minister, Ousman Sonko, indicating to him that all matters relating to security should be handed to the NIA.

“As I said is not in the act but is almost an automatic law sent to you that from now, please, all correspondents should be sent to NIA,” Colley said.

Colley went on to say that an order is superior to the law.

His assertion took the Commission by surprise.

Lead Counsel Faal rubbed his head with his hand in utter disbelief.

“To you an order is superior to the law,” Faal managed to ask.

“I think the fundamental problem that we had at the prison is that we had administrators who did not have a clue of what they were doing,” charged Faal.

“Mr. Chair I cannot help but this is a serious travesty. Is sad that prison administration was led in the hands of people who did not have a clue; they did not understand the act, they did not know what they were doing. Is unfortunate that was the situation.”

At this juncture, Faal asked Colley his qualification and he said he is a graduate of grade nine (9).

His response did not match with the education system of The Gambia at the time which was based on High School and Secondary School (Form and not Grade).

Colley denied claim made by Dr. Scattered Janneh that officers who hailed from Kanilia were running Mile II prison.

He also disagreed that former president Jammeh was using his Kanilia brothers to run the prison.

One of the witnesses who testified before the Truth Commission accused Colley of practicing tribalism and nepotism, but he denied that he was running a tribal cabal in the prison.

Colley also denied the allegation leveled against him that he stole the food rations meant for the prisoners.

One of the inmates who testified at the TRRC, Baba Galleh Jallow, said what Colley did was not stealing but robbery instead.

Jallow said when someone was stealing, the person would sneaked in, but Colley and his officers used to take the food ration from the stores in broad day light while the prisoners were gazing at them as they were putting the condiments into their vehicles.

Colley denied Jallow’s claim, saying he has never in his life stood at the prison store.

He also denied that he never stole farm produces and meat that were meant for the prisoners.

He said he fought for the prison to have a farm at Yundum.

He explained that when they had farm produces, they wrote a report and sent it to the line ministry about what they produced.

He said the claims that he stole meat that was meant for the prisoners were not true.

Colley said no one told him that Ebrima Jammeh was handling the torturing machinery at the Mile II prison.

Asked whether he did not know beatings were taking place at the Mile II prison, Colley responded in the positive.

He further said it depended on if the prisoner tried to insist or fight against the officer.

Colley denied receiving bribery from anybody.

After first, he said he was not aware that Baba Jobe’s term in prison expired.

Thereafter, he said he informed the minister that Baba Jobe’s term had expired but he was not given the go-ahead to release him.

Colley however admitted to have kept Baba Jobe unlawfully, but based it on an order.

“If I release him, then I will replace him,” he said

Colley said he was never taking bribe from Baba Jobe’s family or any other family member. He said Baba Jobe’s wife allegations were untrue.