By Mustapha Jallow A regional deputy commissioner of immigration has on Thursday told Foroyaa that security measures have been put...
Read more

By Yankuba Jallow Private lawyers hired by the State to prosecute former officials of the National Intelligence Agency have filed...
Read more

Gambia Teachers Union (GTU) is demanding the Catholic Education Secretariat (CES) to refund an amount of over 7 million dalasis owed to the teachers.

This includes the monies that the Secretariat owes the CES Credit Union, the GTU and the GTU Cooperative Credit Union (GTUCCU).

These statements were made at a press conference convened by the union yesterday. 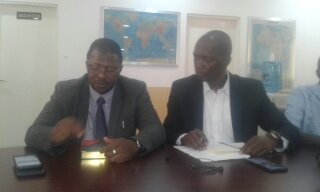 According to the Gambia Teachers Union, about 700 teachers in the Catholic Education system are currently on a sit-down strike demanding for their money.

Essa Sowe, the Deputy General Secretary of the GTU said they have received several complaints from their members working under the CES that their monies are being deducted but it is not been paid into the required account.

“We have been so considerate. This is not the first time this is happening. The last strike you may hear this is one of the main issues. We almost resolved it and it becomes a recurring decimal,” Sowe said.

He said this issue affects teachers in the Catholic Education Secretariat and there are other issues affecting about 15,000 teachers which they are following.

“The entire teaching fraternity is in solidarity. The Government needs to work very fast to address this issue otherwise there might be other undesirable effects,” Sowe said.

Sowe said it is a matter of over six hundred thousand dalasis owed to the GTU Cooperative Credit Union and over half a million dalasis is owed to the GTU. He said the Secretariat is also owing an insurance company where the teachers register.

Sowe told the press that all the teachers in this particular domain are members of the GTU and they are all affected.

“All teachers under the purview of the Catholic Education Secretariat have been instructed to stay at home because they have a structure call Network of Mission Teachers. We have confirmed that with them,” Sowe said.

Sowe said the GABECE examinations for the Grade 9s have begun yesterday and this sit-down strike is likely to have dire consequences and implication.

Sowe said: “This is the first step. We have structures in place and we only hope that Government will respond accordingly but the primary duty bearer here is the Catholic Education Secretariat. We only hope that the matter will be resolved and resolved today failure of which we will come back; we have our structures in place, review the situation and take any necessary action. What we are emphasizing is that these monies must be paid. We are not asking anything extra-ordinary.”

He added: “We are asking what is due to us; nothing extra-ordinary.”

Mendy highlighted members of the Credit Union who work for private schools are not faced with this problem, adding that it is only those who work for Catholic Education Secretariat who have this problem.

Mr. Baboucar O. Joof, the General Manager of the GTUCCU emphasized that the teachers that are in the current sit-down strike are those whose monies have been deducted and have not been forwarded to the institutions they were supposed to go thereby denying them the authority and power to have access to their asset in those institutions.

Joof said: “This was not supposed to be a problem at the first place. The teachers have been receiving their salaries every month. The full salary is received by the Catholic Education Secretariat. They have been giving the teachers their net salaries but the deductions have not been paid to the institutions that were anticipating them. That has a lot of consequences and that is why the teachers are saying ‘this is our money.’ They are not asking for a pay increase. They are not asking for something extra-ordinary. They worked for these five months and their point is ‘give us our money, this is our money. We are not begging.”

The seasoned teacher said the Union has reached its frustration point in the negotiation process and that is why they resorted to industrial action.

“The remedies must come now so that the teachers can go back to work. As of now, the condition is they are not going back unless and until we know where all these money is and we have access to it and send them to the right account then the teachers can go back to work. This is the position of the teachers which the Union is standing in solidarity with; the Union is behind the action because we feel this is the only way we can get to the bottom of what happened and fix it once and for all,” he said.

Martin Gomez, a former President of GTU said the GTU is committed to the welfare of the children of this country and their members. He said, “There are times when we have to take the bull by the horn and this is one of them.” He said there are other issues affecting their members but the issue at hand is the most urgent one.

“I know there are other issues affecting our members who are not necessarily teachers, but they are support staff. Monies have not still been paid and we are doing the negotiation now for two (2) years now. There is a time that we should draw the line and Gambia Teachers Union will not shy away from this responsibility. If our members are aggrieved, it is our responsibility to say it is enough,” he said.

By Mustapha Jallow A regional deputy commissioner of immigration has on Thursday told Foroyaa that security measures have been put...
Read more
- Advertisement -
Legal Affairs

By Mustapha Jallow A regional deputy commissioner of immigration has on Thursday told Foroyaa that security measures have been put in place at Gunjur newly...
Read more

How Does Government Intend To Settle The Land Problem?

QUESTION OF THE DAY Many Gambians who went directly to local authorities to acquire land suffered many disappointments as one property is sold to different...
Read more

How Does Government Intend To Settle The Land Problem?

QUESTION OF THE DAY Many Gambians who went directly to local authorities to acquire land suffered many disappointments as one property is sold to different...
Read more

The Gambia Press Union is appalled with the news of physical harassment and verbal assault meted out on one of its members, Yankuba Jallow,...
Read more
FOROYAA Newspaper is your premier Gambian community portal delivering news on politics, legal affairs and more. We provide you with the latest breaking news and videos straight from The Gambia and the rest of the world.