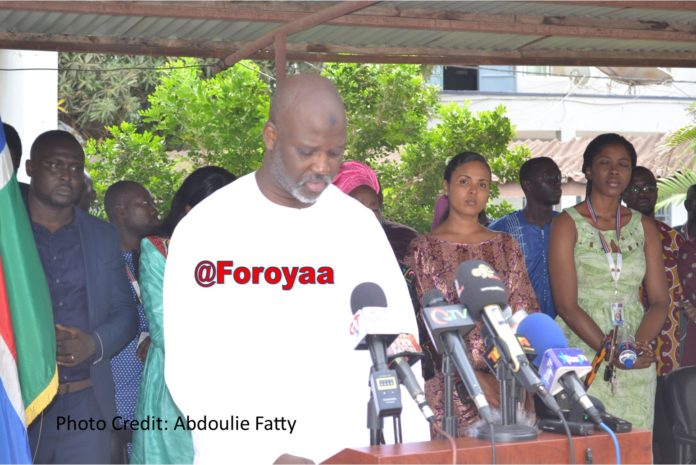 Abubacarr Marie Tamba has finally resigned as the Honourable Attorney General and Minister of Justice, but the country will continue to remember him for his milestone contribution to the ongoing transitional justice process.

His resignation came as a surprise to Gambians but for Tambadou, it was a personal decision. He held a farewell press conference on Friday, 26th June 2020 at his office in Banjul.

“My principal objective as Attorney General was to restore public confidence in the administration of justice system in the country,” Tambadou said.

He is the first and only Attorney General in the post dictatorship era.

AG Tambadou said: “Today, only three and a half short years later, I am proud of our achievements in this endeavour. No one can now deny that public confidence in the administration of the justice system in this country hasn’t substantially increased. Indeed, as a lawyer, I am heartened to finally see the law in action even if I don’t agree with the outcomes at times.”

Ba Tambadou, as many would call him said during his three and a half years tenure as the Minister of Justice a lot has happened in The Gambia.

“On my part, I have initiated and delivered on the key pillars of our transitional justice process which has now achieved global recognition by experts as being among the best models in the world particularly for its inclusiveness and originality,” Ba said.

Though he left so soon, he shall be remembered by the people of The Gambia for some milestone developments including the successful gazetting of a new draft constitution without amendment, the establishment of a Truth, Reconciliation and Reparations Commission process which is currently underway, the establishment of The Gambia’s first National Human Rights Commission, and the establishment of the Janneh Commission to inquire into the financial corruption of former President Jammeh, and as a result of which the Government has been able to recover over 1.1 billion dalasis so far. He initiated and championed the Gambia’s case at the International Court of Justice in defence of the Rohingya which went in favour of the Republic of The Gambia.

“I led efforts to rebuild a hitherto weakened judiciary and I’m glad that we now have a respectable, robust and independent organ of State,” he said.

Immediately after his appointment, he established a Criminal Case and Detention Review Panel which reviewed a total of 241 ongoing criminal cases involving 304 accused persons. He discontinued prosecutions in 36 cases involving 86 accused persons on the basis of insufficient evidence. Reported incidents of arbitrary arrests, detention without trial or torture by State agents, which were a hallmark of the Jammeh days, have substantially reduced.

Under Ba’s leadership, between 2017 and 2020, the Ministry has introduced and revised a total of 47 different pieces of legislation affecting different sectors of Government. 26 of these have become law, and 23 are now before the National Assembly for consideration.

Also, during his tenure, the Government’s commitment to international law has strengthened. The Government rescinded the decision by the Jammeh administration to withdraw The Gambia from the International Criminal Court, paving the way for Gambia’s continued membership to the ICC. The Gambia signed and ratified a number of international treaties including the UN Convention Against Torture, the UN Optional Protocol on the Abolition of the Death Penalty, the UN Convention Against Enforced and Involuntary Disappearance, and the African Charter on Democracy, Elections and Governance.

Ba helped The Gambia to became one of only nine countries in Africa to make a declaration pursuant to Article 34(6) of the Protocol to the African Charter on Human and Peoples’ Rights on the establishment of an African Court to allow individuals to have direct access to the Court.

“To the victims of human rights violations and abuses during 22 years of Jammeh’s rule, you will get justice,” Ba said.

He said he has always had them in mind at every stage of the country’s transitional justice process, adding he has always been committed and dedicated to their cause since the first day he was appointed.

“I know that there have been difficult moments for you and your families in this process and I can only assure you that it will not have been in vain,” he said.

Ba said: “I am aware that my principled position on former President Jammeh has not endeared me to his supporters and sympathisers, and to them I say, Jammeh belongs to the past, so wake up from your dreams of a Jammeh political comeback and move on with your lives. He has caused too much pain and suffering to the people of this country throughout his 22-year reign of terror as the TRRC keeps revealing. He has during this period destroyed the innocence and soul of Gambian society with the sheer brutality of his crimes, and for this, he will be brought to account someday here or abroad. He will surely have his day in court.”

He concluded: “To my critics, and yes there were quite a few, I thank you too for keeping me on my toes all the time even if I felt that some of the criticisms were unreasonable or unjustified or unfair at times. But I will choose this life any day over life in bondage under a dictatorship.”