The Gambia Fire and Rescue Service have on Monday mounted investigation on the cause of a fire outbreak that burnt confidential files and other valuables including laptops and desktop computers at the Ministry of Fisheries. 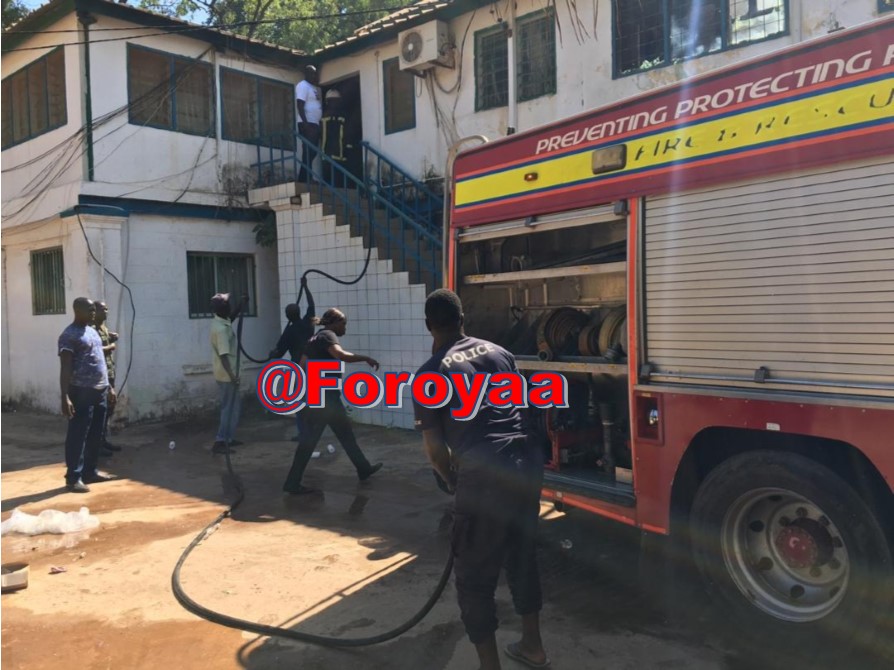 Haddijatou Njie, Divisional Officer of the Fire & Recuse Services said: “The incident is under investigation, so right now we cannot talk to any journalist or explain anything. Even us, we do not know what is going on at the moment until the investigation is done.’’

She promised that once investigations are concluded, they will come back to the media and inform them everything.

“I know within 24-hourse we will know what is going on because our teams are inside gathering evidence,’’ she concluded.

James Furmos Peter Gomez, the Minister of Fisheries told journalists: “I just looked at the back of my window, then saw fire coming from the other side – I shouted and everybody came in. And we called the Fire and Rescue Service, and they did a good job on their arrival.’’

He said the fire out-break has burnt many of their confidence files (documents), adding all those who were in the building were evacuated to safe territory.

“This is a very serious damage because all our confidential files are burnt by the fire,’’ he said. “Where we sit wouldn’t be a problem because we can easily find another office-place to sit,’’ he explained.

He added, “Our laptops and desktop computers ‘have gone’.  The most unfortunate thing is we do not have a backup system here. I wished the whole government had a system of backup that every information shall go somewhere and stored,’’ he said.

According to the Minister, everything that their office had been doing including the works on the confidential files were burnt. He said, ‘every company that has been doing business with Fisheries their files are there and that is what we have lost in the fire.’

He continued to say that all their files are relevant documents as ‘when we deal with people and whatever agreement we have with them, licenses we issued and funding we get are kept in these confidential files. As for now, we do not know what caused the fire.’’

By Nelson Manneh Emmanuel Daniel Joof, the Chairman of the National Human Rights Commission, has on Thursday 25th February 2021 disclosed to the media that...
Read more

First let us consider who can be a member of a Village Development Committee. According to section 93 of the Local Government Act, "A Village...
Read more

By Nelson Manneh Lamin Fatty, the newly elected leader of the Student Teachers Association (STA) at the Gambia College School of Education has promised to work with...
Read more
FOROYAA Newspaper is your premier Gambian community portal delivering news on politics, legal affairs and more. We provide you with the latest breaking news and videos straight from The Gambia and the rest of the world.