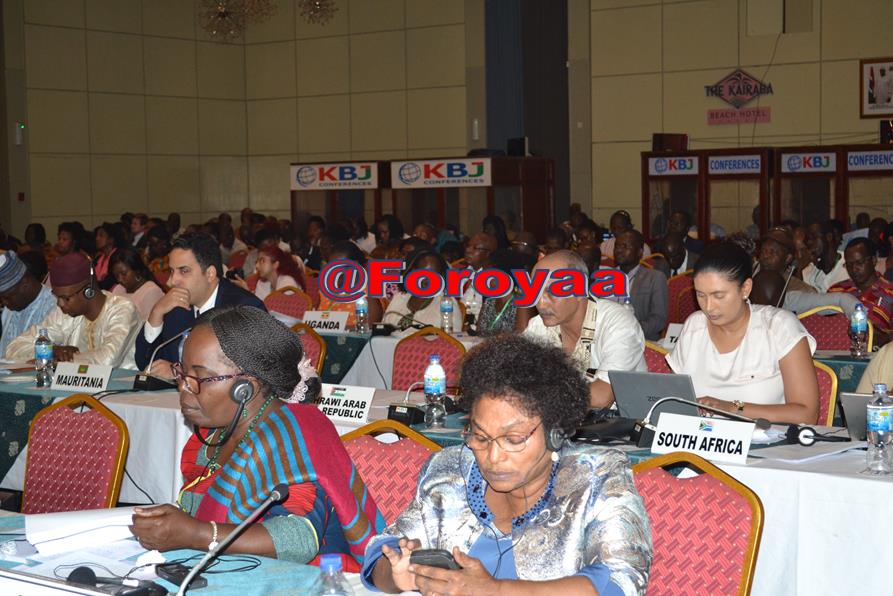 They made the call at a panel discussion organised by the Working Group on the Rights of Older Persons and Persons with Disabilities (WG-OPPwDs) held at a local hotel in Kotu in The Gambia, where ACHPR’s 65th ordinary session is taking place.

Commissioner Sylvie Kayitesi, one of the panelists, called for more concrete steps to be taken to protect the older persons and persons with disabilities who are often the most discriminated and marginalized factions of our societies.

Deliberating on the importance of the protocols, Madam Kayitesi said the two protocols as well as the African Charter of Human and Peoples Rights are grounded in African traditions and values.

“Our African values and tradition teach us that we are all equal and that we should respect one another despite our differences,” she said.

She added that they must take steps to ensure countries ratify the protocols and make them a priority.

Commissioner Yeung Kam John Yeung Sik Yuen, who is the chairperson of the WG-OPPwDs, urged African countries to sign and ratify the two protocols, saying they are rights.

He emphasised the necessity for signing and ratifying of the protocols, noting that the two protocols cover subjects which are peculiar to Africa; these include the Albinos.

Several other speakers also enjoined State Parties on the need to sign and ratify the protocols to protect the rights of the older persons and the persons with disabilities.

The Protocol on the Rights of Older Persons in Africa was adopted by African Union during its 26th Summit which took place from 21st to 31stJanuary 2016 in Addis Ababa, Ethiopia. The protocol is not in force yet because it has not gathered the 15 ratifications required. Only the Kingdom of Lesotho and the Republic of Benin ratified the protocol, while twelve States signed it namely, Central Africa Republic, Chad, Comoros, Gabon, Ghana, Guinea Conakry, Mali, Mozambique, Rwanda, Sierra Leone, Togo, and Zambia.

The protocol on the Rights of Persons with Disabilities on the other hand was adopted by the African Union at its 30th Summit held in Addis Ababa from 22nd to 29th January 2018. Since its adoption, no single country has ratified the protocol out of the minimum threshold of 15 ratifications required for it to be in force. However, only six countries, namely Burkina Faso, Central African Republic, Gabon, Rwanda, South Africa, and Togo, have signed the protocol.

According to the experts, the lack of ratification by State Parties is holding back the giant steps taken by the African Union to equip itself with treaties complementing the African Charter on Human and Peoples Rights which are specifically focusing on vulnerable groups like the Older persons and Persons with Disabilities.

“In fact, without these instruments enforced, Older persons and Persons with Disabilities in Africa would remain with the minimum and non-specific protection of their rights which has been in place under various international treaties and the residual provisions existing in the African human rights law,” the statement of the WG-OPPwDs said.

The Gambia is yet to sign or ratify any of the two protocols. There have also been calls from many Gambians for the Government and/or relevant authorizes to pass the persons with disability bill to no avail.

By Ndey Sowe The Gambia Police Force (GPF) with support from UNICEF, is currently rolling out training programmes centered on...
- Advertisement -
Human Rights