Gambia had virtually all its best attackers when they tied the Democratic Republic of Congo weeks ago.

From the calibre of Bubacarr Trawally to Modou Barrow –two players who stayed from national duties for a year- all made the team sheet with Ali Sowe, Yusupha Njie and Nuha Marong the notable absentees.

But there was no mentioning of Ensa Njie –the goal assassin who has netted more than any Gambian plying in Europe.

Failing to include the 16-goal striker in a duel of that magnitude should, in normal circumstance, draw swears and wave of antagonism. However, none of this happened, provoking questions of whether the national team tacticians in fact know about the lad’s existence, his mindboggling and never-fading wolf-like penchant for goal.

The only man coming close to matching his voraciousness for back of the net is a certain Baboucarr Jobe –Gambia’s saviour when DR Congo looked assured of nicking in the points.
And even with Jobe, the lone soldier moving the heavens to ensure Mjallby’s ascension to the very pinnacle of Swedish football, was considered peripheral in the duel against The Leopards not until in the closing stages.

Far from unfathomable, Scorpions’ coach Saintfiet at the time was shoved in a cul-de-sac and needed to play the fresh faces he summoned in Trawally and Barrow. At the other end of the spectrum in faraway Spain, Ensa Njie took no offence for the supposed snub from the Gambia national team and watched the DR Congo nail-biting four-goal-thriller on his screen.

Enthusiasm lit on his face with his mohawk hairdo visible when our discussion veered towards international football and Gambia, a nation he left some years ago fueled by the search for pastures new.

‘Alhamdulilah (God be praised). I am very happy because Gambia has good players who are playing outside the country and I feel very fortunate to be the top Gambian scorer abroad this minute,’ he said shyly this week, twenty hours before a league game.
In the run up to this, Njie has dreamt of donning Gambia’s colours but the moment never came.

‘I am not angry at all (that I wasn’t invited). I know that my moment will come….always dreaming of the moment and I pray that when the time comes, it will be the best moment for my country and for me too,’ he tells Foroyaa Sport from Spain without a tinge of dereliction.

For now, that dream will be put on pause until the August of 2020 when his wish would come to fruition in Gambia’s planned assault on Gabon in the heart of Libreville.

A swift recapitulation into a journey, saw Enssa take his career to Latvia to try out football in the Baltic country where he had hoped he could be given national call-up.

Build-up to this trajectory had him developing his craft in Spain’s fourth tier armed with the notion technique of the game there should be enough to earn a contract with a Latvian top club.
Rigas FS offered him a trial and he seized it with both hands, playing thirty-three games in two seasons and scoring twice before returning to Spain.

He continued: ‘l went to Latvia to have chance to play in the national team because it’s professional level. In Spain, l was playing in fourth division semi-professional.

‘Football in Latvia is very interesting because many European teams come there to find very good young players. Spain, as you know, is one of the best leagues in the world. l had a hard injury and it was hard for me to recover my level, but Alhamdulilah everything happened for a reason. Now, everything is okay. After my time in Latvia, l joined Moralo where I played the 2017-18 season.’ 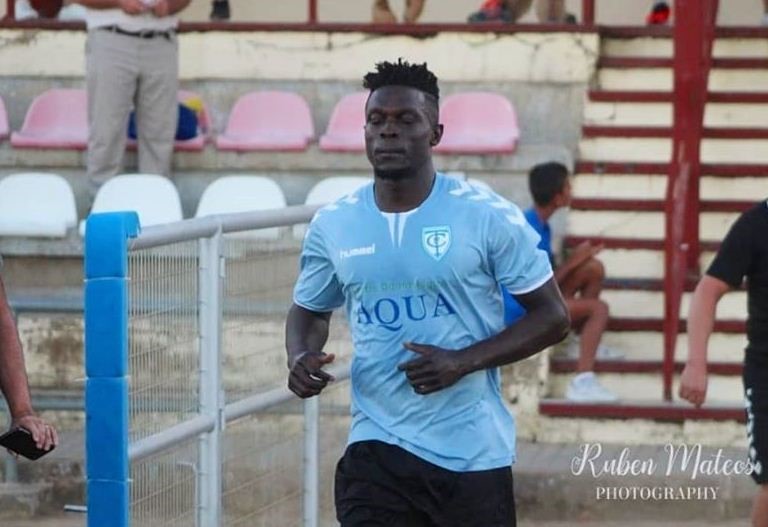 Fast-forward to this term, the diminutively built attacker is on a goal-fetching spree much like the season he scored thirty (30) goals in twenty-four (24) outings for semi pro outfit Tablero CF in the summer of 2009.

Sixteen is his goal tally in fifteen (15) matches and is still counting this campaign.
Clubs home and abroad have sent their ubiquitous agents to keep tabs of his development amid concerns he may not see out the season with fourth tier side Trujillo.

Bids have been submitted from sides in the third division.
‘I have several second division B teams that want to sign me in the winter market but now I only think about my team,’ he said.

They face Diocesano this Sunday with league top scorer Njie expected to be key.