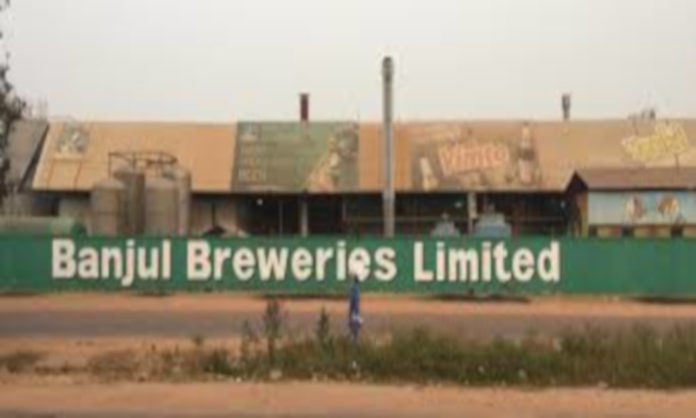 Employees of the ‘Banjul Breweries’ Company have renewed their call for Government to intervene to ensure that their rights are respected by the Company.

According to the employees, the Company has written to the Workers’ Union indicating that most of the staff will be made redundant and will be compensated according to the Labor Act of 2007. In the letter addressed to the Union, the company indicates that they need 5 million Euros in the next three years of which 2 million Euros is urgently needed within this time to sustain the current plant’s operations.

According to the employees, the Company has been encountering serious and continuous technical issues in all areas since the beginning of the year 2020; that more than 85% of the workforce have been asked to stay at home partly due to the global COVID-19 pandemic and that the process of making the staff redundant will begin on May 1st 2020.

If readers can recall, the downturn in Banjul Breweries’ operations came as a result of the adverse effects of the sharp increase in their excise tax by the Finance Minister. Even though the said tax was reduced after seven months, the significant loss of income during the period that arose cannot be cushioned by the Company’s economic shock absorbers.

The workers said they were told to stay at home because the company was going to be closed down; that on 26th March 2020, they ceased operation.

“Management has not yet explained to us what exactly they want to do with the Company. Initially, they told us that they want to close down. But at our last meeting, we were told that the shareholders want staff to be drastically reduced,” the leaders of the Workers’ Union said.

A staff, who wished to remain anonymous, said they want Government to intervene so that they will know their fate and whether the Company will be closed down or not; that initially, they were informed by the Management of the Company that the shareholders want the Company to close down due to technical and financial constraints.

“We want to know whether the Company will be totally closed down or whether the shareholders want to reduce the staff?” they asked.

The Union’s leaders said they were told compensation will be inclusive and all remuneration and other benefits due to each staff, will be calculated and paid accordingly.

They alleged that the Company’s shareholders have a similar one in Senegal and they want to use that one in Senegal to produce and supply the Gambia; that their employers want a few employees to manage the products that will be coming from Senegal.

“Looking at the income that the Company pumps into the economy of the Gambia and the number of staff they have employed, Government should not allow this to happen,” the anonymous staff told this reporter; that the Company’s shareholders can close down if they want to; but that if they want to make all staff redundant just for a sister Company in Senegal to produce and supply the country, then Government should seriously look into this and prevent it from happening.