Court to Rule on Yankuba Touray’s Bail Application on Murder

By Nelson Manneh The Gambia has on Monday 10th May 2021 registered four new cases of the coronavirus, taking the total...
Read more

The Banjul High Court presided over by Justice Ebrima Jaiteh will on Monday rule on the bail application made by Yankuba Touray who is facing a murder charge. 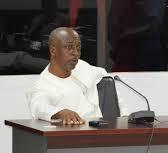 Touray is charged with the murder of ex-Secretary of States for Finance, Ousman Koro Ceesay, who was alleged to have been murdered sometime in June 1995 with the use of pestle like object and other dangerous weapons.

Abubacar Tambadou, the Attorney-General together with Lawyers MB Abubakar, the Deputy Director of Public Prosecutions and A.M. Yusuf, the Principal State Counsel appeared for the State while Lawyers Abdoule Sisoho and Patrick Gomez appeared for Mr. Touray.

Lawyer Sisoho told the court that bail is not granted to offences like treason and murder.

He argued that the accused person is presumed innocent until proven guilty.

“Why should the court adjourn the matter to 15 weeks?” the Lawyer poised.

He said if the slogan ‘New Gambia’ is real, the rule of law must be duly followed and the accused should be granted bail.

“The accused person should be granted bail and the trial should commence next week,” Lawyer Sisoho concluded as he handed the court with the authoritative decision of the Supreme Court.

In his reply, Attorney General Baa Tambadou said Counsel Sisoho misconceived the Supreme Court ruling on the case involving the State and Henry Gabriel. He put forward that Mr. Gabriel was facing a manslaughter charge and convicted for committing manslaughter while Mr. Touray is charged with murder. He said the initial murder charge in the case of Gabriel case was amended to manslaughter.

Sisoho in his reply on the law made reference to a certain provision of the Criminal Code that murder and manslaughter fall on the same category of offences.

Justice Jaiteh said: “The accused has indicated that he pleas his constitutional immunity. He did not enter a plea of guilty or not. Under the circumstances, I enter a plea of not guilty for the accused persons.

The Attorney-General, Abubacar Tambaou in his submission said the court is right by entering a plea of not guilty under the circumstance. He said the accused is challenging the jurisdiction of the court to hear and determine the matter by raising issues of constitutional immunity.

“It is a challenge that cannot be ignored,” Tambadou told the court.

He said a general claim for constitutional immunity such as the one claimed by Mr.Touray is ambiguous.

“There is nothing or no provision of the Constitution that the accused person sought to invoke. We do not know the type of immunity he is claiming. We do not know the category of offences he is claiming immunity for. The accused person cannot arrogate to himself the power to determine his immunity. The claim for constitutional immunity cannot be ignored,” the Attorney-General submitted.

Tambadou further submitted that the claim by Mr. Touray for constitutional immunity can only be a defence like all defences in criminal trials.

“It is the courts that should determine whether the defence should be upheld or not.”

He sought for an adjournment to enable the prosecution to amend the indictment to add at least ten (10) additional counts of murder and other serious offences. He said because of this amendment, the prosecution needs to serve the accused person all relevant information to help him prepare his defence consistent to his right to a fair hearing. He beseeched the court to grant them an adjournment till after the vacation which would be in October 2019.

In his reply to the bail application, Lawyer A. Sisoho said the charge before the court is murder.

“Unfortunately, there is nothing before this court a precedent that would require referral of the matter to the Supreme Court,” Sisoho said.

He said if the Honourable Attorney-General feels that a referral is necessary, he can file a new suit before the Supreme Court invoking its exclusive original jurisdiction.

QUESTION OF THE DAY It is important to emphasise that the provision of an Elections Act must not contradict the...
Read more
- Advertisement -
Editorial

By Hatab Nyang Police prosecutors have diligently prosecuted and secured conviction in a case against Kumba Secka and Mai Baldeh, the police stated on its...
Read more

By Nelson Manneh The Spokesperson of the Gambia Police Force Superintendent Lamin Njie has over the weekend informed this medium that the police have commenced...
Read more

By Nelson Manneh Mrs Fatou Jangne-Senghore, executive director of Article 19, on Thursday told the Truth Commission that in 1999, the government wanted to introduce...
Read more

By Mariama Marong Former officials of the National Intelligence Agency have on Wednesday, 5th May ended their protest and entered the dock as they complied...
Read more
FOROYAA Newspaper is your premier Gambian community portal delivering news on politics, legal affairs and more. We provide you with the latest breaking news and videos straight from The Gambia and the rest of the world.