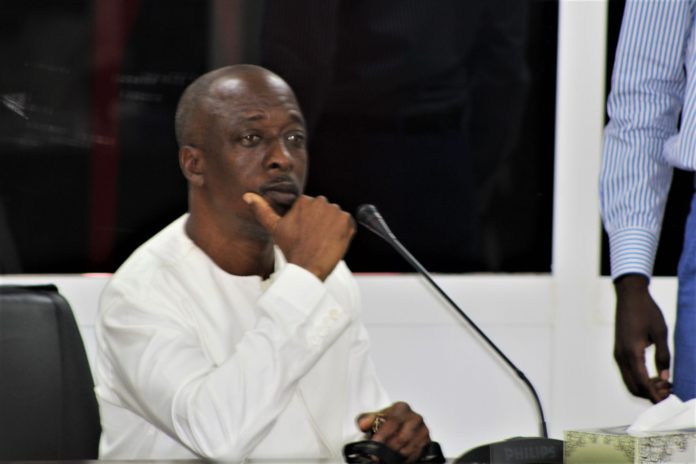 Abdul Maita Yusuf, the Principal State Prosecutor on Tuesday told the Banjul High Court that the prosecution has made a prima facie case against former junta member Yankuba Touray, who is charged with the murder of former minister Ousman Koro Ceesay.

Abdul Maita Yusuf made this statement while countering Counsel Abdoulie Sissoho’s claim that Touray should be freed as he has no case to answer.

“There is a case to answer,” Yusuf said.

Touray, a long-serving ex-Minister of Local Government and Lands under both the AFPRC and APRC regimes is standing trial for the murder of ex-Minister of Finance, Ousman Koro Ceesay. The ex-APRC national mobiliser is accused of murdering Ceesay sometime in June 1995 with the use of a pestle-like weapon. He pleaded not guilty to the offence as charged.

The prosecution called nine witnesses including Touray’s bodyguards, drivers and medical personnel. The prosecution also tendered three sets of exhibits in support of their case. After the prosecution closed their case, the defence lawyer took the option of making a ‘no case submission’ saying his client has no case to answer.

Sisoho last week said the ‘no case submission’ was made because the prosecution failed to prove essential elements of the alleged crime (murder). He added that the prosecution witnesses have been discredited for giving inconsistent testimonies.

Yusuf said the evidence as adduced requires an explanation from Yankuba Touray. He added that the evidence before the court so far, established that the elements of the offence (murder) have been proved.

He argued that so far, none of the witnesses have been discredited adding a prima facie case has been established.

Yusuf told the court that it should not at this stage evaluate the evidence before it and should not also attach any weight to the evidence. He said when a ‘no case submission’ is made, the prosecution is expected to prove that a prima facie case is established. He said the testimonies of Ensa Mendy (PW2), Amat Jangum (PW3), Lamin Ndour (PW4) and Alagie Kanyi (PW6) have not been controverted by the defence adding their testimonies show there is a prima facie case against the defendant.

“All the evidence disclosed the element of the offence,” Yusuf said.

Yusuf said the elements of murder are three; whether there is dead, whether the accused person caused the death and whether the act was done with malice aforethought.

“The evidence led before this court is reliable. None of the witnesses have been discredited,” Yusuf said.

Yusuf said the question of whether or not the court believes in the evidence does not arise during the state of proceeding.

“There is no law to say dead has to be confirmed by scientific or medical examination,” he said.

“Koro Ceesay is dead. It is a fact,” Yusuf said.

On whether or not the weapon used to kill a person has to be produced or not, Lawyer Yusuf said the weapon or any object used in murder is dispensable adding it is not necessarily a must for it to be produced and tendered before the court.

Yusuf put forward that the whole evidence that led to the dead of Koro Ceesay all revolves at the bosom of Yankuba Touray.

Counsel Sisoho for the defence in his reply on points of law said Counsel Yusuf was relying on persuasive (Nigerian) decisions to support his argument adding the position of the law in The Gambia, on whether or not the court should evaluate the evidence, is clear. Sisoho relied on the case of the State versus Ebrima Barrow and Others (criminal case number 86 of 2002).

“If you don’t evaluate how can you rule?” Sisoho quizzed, adding “the two cases the prosecution cited are both persuasive.”

On whether it is a must for the weapon to be produced, he referred the court to the Supreme Court case of The State versus Batch Samba Faye wherein the court held that the weapon or object used in murder must be produced. Sisoho added that was the reason why Batch Samba was released after serving nine years in prison.

Sisoho said Yankuba Touray will turn 53 next week and he should be freed to celebrate his birthday with his family and friends. He invited the prosecution lawyers to the birthday celebration as he urged the court to rule in favour of Touray.

Readers will recall that Lawyer Sisoho, while making the ‘no case submission’ said the prosecution’s case failed because there is no evidence. He added that the actus reus of Murder was missing and the prosecution hasn’t proven it.

“There is no decease. There is no weapon. Even if there are a decease and weapon, they (the prosecution) have not connected it to the accused person,” he said.

He said the prosecution called on irrelevant witnesses to prove their case adding they only brought them to waste the court’s time.

“There testimonies have no value to the case,” defence Counsel said.

Sisoho put forward that even if death occurs, the prosecution has the duty to prove that the action or actions of the accused person, as mentioned in the indictment, killed Koro Ceesay. He reminded the court that in the particulars of the indictment, it was mentioned that Koro Ceesay was killed by Mr Touray using a pestle-like object and other dangerous weapons.

He explained that the actus reus (guilty act, which is necessary to prove murder, has not been proven.

“They (the prosecution) must prove that a weapon was used. The best evidence is the physical evidence for the court to see and determine whether that object is capable of killing or harming,” Sisoho said.