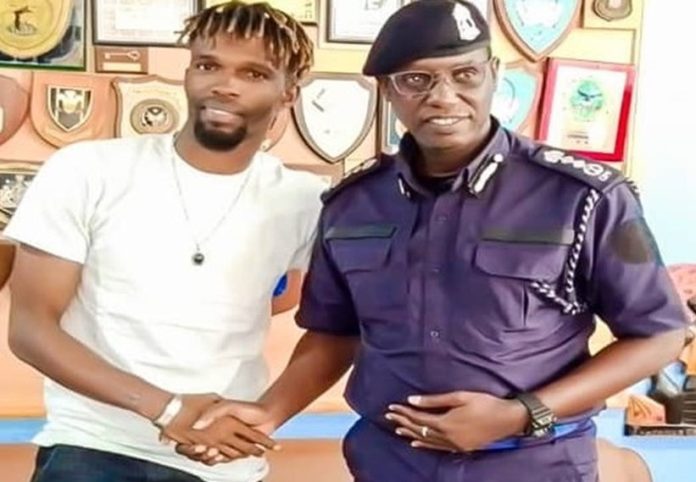 Sheriff Camara, the Banjulian rapper alias ‘Chipa Yi,’ has received D30,000 from The Gambia Police Force (GPF) as part of a compensation he demanded after he was mercilessly beaten up by a team of paramilitary officers in December 2021.

“Finally, I was able to meet IGP Sanyang. We had a smooth conversation, and he asked how much should they give me but due to his humbleness, I told him whatever they gave me would be fine. He asked whether D30,000 would be ok, I agreed with the amount because after all, we are one Gambia and one people,” the rapper told Foroyaa on Wednesday after his meeting with the IGP.

During the meeting, according to him, the police boss apologised to him on behalf of the GPF after he was manhandled by officers in his-led force.

It could be recalled that the Chipa Yi was attacked and beaten up by a group of PIU officers on 12th December 2021, around 2 am. The incident, according to him, was later reported to both Police and National Human Right Commission (NHRC) for action to be taken against the said officers.

In an interview with NHRC’s top investigator recently, he disclosed that 4 officers, who were involved in assaulting the musician, were found guilty and disciplinary measures were taken against them by the police high command. On 13th May 2022, Mr. Emmanuel Daniel Joof, the Chairperson also said that the Police authority has agreed to pay D45,000 to the rapper.

Meanwhile, below is the rapper’s statement on the matter:

“I am here to give you a final update in regard to my case against the PIU personnel. If you can recall I was manhandled and brutalized by some PIU personnel for a mistaken identity on 12th December, 2021.

“I lodged a complaint against the PIU personnel at the police headquarters and at the Human Rights Commission Office and I demanded an investigation into my case thus, I complied with all their demands during their investigation, going to and fro to the police Headquarters.

“Thus, a thorough investigation was conducted by the Police and the Human Rights Commission hence, the PIU personnel were found wanting & punished accordingly. In short, they promised to compensate me for my damaged personal belongings and my medical expenses but I was unable to meet up with the IGP then because he was on leave.

“Finally, an appointment was made to meet the IGP on the 27th of July 2022 @ 10:15 to settle the case. An agreement was reached between me and IGP Mr Abdoulie Sanyang. Honestly speaking, I’ve never seen a person so humble and down to earth like the IGP Mr Abdoulie Sanyang who apologized to me in person and on behalf of the Police fraternity.

“He motivated me to an extent that I realized that we need people like him to stair the affairs of our security apparatus because he gives an open ear attentively when you talk to him but when he responds it’s always an eloquence fitting his caliber and personality. One of the things I learnt from the IGP Mr Abdoulie Sanyang is, as a nation we need one another because the police are here to protect lives and properties and that the police are not our enemies but not all Police personnel are immaculate as well.  “Thanks to the Human Rights Commission Office who made sure that justice prevailed and my rights were defended as a human being. A big thanks to all those who have shown an unflinching support as far this case is concerned. For The Gambia Our Homeland.”