Colonel Essa Tamba of the Gambia Armed Forces (GAF) has on Monday told the press that they have been allocated over fifty thousand (50,000) hectares of farmland in the CRR to implement their agricultural project. 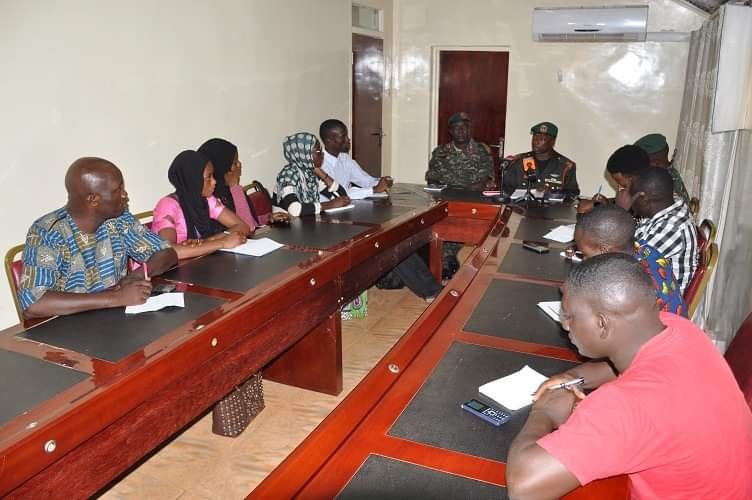 Colonel Tamba is the focal person of the GAF Agricultural Project and its head of the Child Welfare Unit of the GAF.

The Armed Forces held a press briefing on Monday 13th May 2019 at the Defence Headquarters in Banjul to discuss the intervention of the GAF into productive activities namely Agriculture.

Colonel Essa Tamba said they have visited CRR and held discussions in Kerewan Touray, Pacharr, Budouk and Wassu with various community leaders such as Chiefs, Alkalos, land owners, women and youths in CRR North and South from Friday 3rd to Sat 4th May 2019.

He said: “We at the GAF realised that the government spends forty-eight million dalasis each year in purchasing rice alone to feed our troops. Apart from saving government 48 million dalasis each year, we want the millions being spent on the purchase of meat, rice or fish for the Armed Forces to be invested elsewhere. The plan (to carry out the agricultural project) is to dedicate a Battalion- that is 1,000 personnel (30 % of which shall comprise youth from the beneficiary communities) to be employed by the project to feed the army. In addition, we are confident that, with the appropriate incentives, GAF has the capacity to feed the nation and even export outside of this country.”

He said it is envisaged that the employment of these youths will in turn help to mitigate rural-urban migration as well as illegal migration of youths. He added that the project will also promote infrastructural development in the areas where the project will be located. He indicated that towns like Janjangbureh, Wassu which in the past had been tourist sites could get a facelift, as part of the corporate social responsibility of the project to once again attract tourists.

He stated that the project will enhance civil-military relations due to the creation of employment opportunities for the community and it will also ensure that the military is fully contributing to national development.

Major Lamin K. Sanyang, the Public Relations Officer for the GAF said the Chief of Defence Staff’s vision for the Armed Forces concisely articulates: “A highly transformed, motivated, apolitical and non-tribally inclined Armed Forces that is fully equipped and  prepared to execute its Constitutional roles, contributing meaningfully to national development and playing key roles in the maintenance of regional and global peace and stability and at the same time subjected to democratic civilian control and accountability”

Sanyang said the GAF has been involved in productive activities such as engineering, health and education. He detailed that the GAF Engineering Corps since its formation has undertaken projects and delivered high quality and standard works in construction such as their accommodation facilities, Mayork Senior Secondary School in Foni, Siffoe Senior Secondary School as well as the University village in Faraba Banta. He said the Corps is still vibrant and relevant in ensuring their contribution to national development.

He said the GAF operates medical facilities in its entire military barracks to treat soldiers and their families adding that a greater percentage of patients that receive treatment at these facilities are civilians.

“As an institution, we believe that extending these services to the civil population is part of our corporate-social responsibility and also good for civil-military relations,” he said.

“With this caliber of medical personnel, there are plans to establish a Military hospital in this country that will give access to standard medical outreach to both the military and civilians. It is only in The Gambia that we do not have a Military Hospital. Therefore I don’t think it will not be out of place to support the GAF in establishing a Military hospital,” he said.

He said during the last doctors sit-down strike, the GAF doctors who were around continued work and attended to patients at their public hospitals.

In the educational sector, Major Sanyang said the GAF is running schools in all its military camps teaching their children as well as those of civilians living around Fajara, Yundum and Farafenni.

“Our military personnel who have graduated with Bachelor’s degrees, HTC as well as PTC from the University of The Gambia and the Gambia College are the ones teaching at these schools. The school in Yundum, for example just registered her first batch of students for the Grade 9 exams and there are very high hopes that the students would emerge with very impressive results,” he said.

CONSTITUTIONAL ROLES OF THE GAF

There are some people in the country who opined that the country does not require an army but for the army PRO, he said the GAF’s creation is a mandatory constitutional directive and its functions are also constitutional in nature under section 186 which states “there shall be the Armed Forces of The Gambia which shall consist of the Army, the Navy, the National Guards and Air Force and such other service for which provision is made by an Act of the National Assembly”.

He expounded that the same section prescribed means to qualify the existence of the GAF when it profoundly states, “the Armed Force shall be equipped and maintained to perform their role to defend The Gambia as well as such other functions for the development of The Gambia as provided in this constitution”.

He said: “If the GAF is tasked to defend The Gambia and perform any other function for the development of The Gambia, then it goes without saying that it must be equipped as well as maintained to be able to carry out these enormous and challenging tasks. This is because there is a direct correlation between the roles of the Armed Forces and resources required for accomplishing those tasks. The architects of this constitution had contemplated beyond equipment and maintenance to mean the weapons, food and to include concrete mixers and tractors amongst others, to enable the GAF participate meaningfully in the socio-economic development of The Gambia.”

This also means that since its formation over three decades ago, the GAF has been engaged in productive activities such as engineering, health and education as part of its constitutional mandate.

“It is only in the area of agriculture, however, that the participation of the GAF has been at a smaller scale with Services and Battalions running small unit farms to subsidize their diets,” he said.

He said as part of the ongoing reforms and constitutional requirement, the Armed Forces is looking at diversifying its roles and responsibilities in order to reposition itself in the productive sectors of The Gambia.

“We are looking at a whole range of agricultural products from rice to moringa, aquaculture to animal husbandry and so on. This is borne out of our conviction that we have the personnel, the discipline; we are organized, focused and professional,” he said.

He stated that the GAF has developed a concept paper to look at their participation in agriculture in line with their secondary function under the Constitution. He said, on Monday 08 April, 2019, a presentation of the proposed Agricultural Project was made by the CDS to President and Commander-In-Chief of the Armed Forces, Mr. Adama Barrow during a meeting with their partners from the AGCO Group of South Africa at the State House.

“It may interest you to know that the AGCO Group also made a presentation aimed at involving in larger scale production in areas such as Animal Husbandry, Poultry, Aquaculture, Rice cultivation and Moringa production,” he said

He said the AGCO Corporation, which is an American Company that has its regional headquarters in South Africa, is a global leader in the design, manufacture, and distribution of agricultural equipment. He stated that the company has similar partnerships with other military entities in Africa and around the world to optimize the potentials of their militaries.

He said: “We are on a legal mission and anyone trying to stop GAF in this venture will be embarking on an illegal activity. The time for rhetoric is over; anyone who has an issue on this is kindly invited to join us in the farms this year. With or without our partners, the AGCO Group, GAF is on course to go ahead with this Agricultural Project to feed herself and if possible, feed the nation.”