A young Gambian movie producer has depicted the living conditions of his country in a play titled: ‘‘Who to Blame’’, for the critical thinking of his fellow citizens about their Government and environment.

Modou Lamin Sowe has transformed a Secondary Drama Group into a Movie Production outfit called ‘‘Young Stars Movie Production’’ where he brings together his mates to produce the movie. 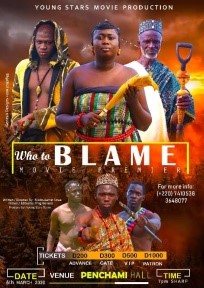 “The movie is about our Government and how leaders should lead and how we as individuals should live in our environment,” he said.

The 26-year-old said he and the team portrayed what is happening in their societies and how people get involved in these circumstances; that they performed these types of situations for people to relate it to themselves in order to be sensitized and educated.

“Our movie is not directed to anyone but for those who relate themselves to it,” he said. The Cheesay Majaw native called on Government to consider the youth of the country who are working in the entertainment industry for the promotion of their productions.

Sowe, a student in his Advance Diploma level at the Gambia College’s S.E.S and Arts Department, is a Director, Actor and writer; that his performance as an artist is something he has realised since the early ages of his life in his native village.

He commended the efforts of individuals who have assisted them in the production of the movie ‘‘Who to Blame’’, which he said will be premiere on Friday March 6th 2020, at a local Hotel in Senegambia.