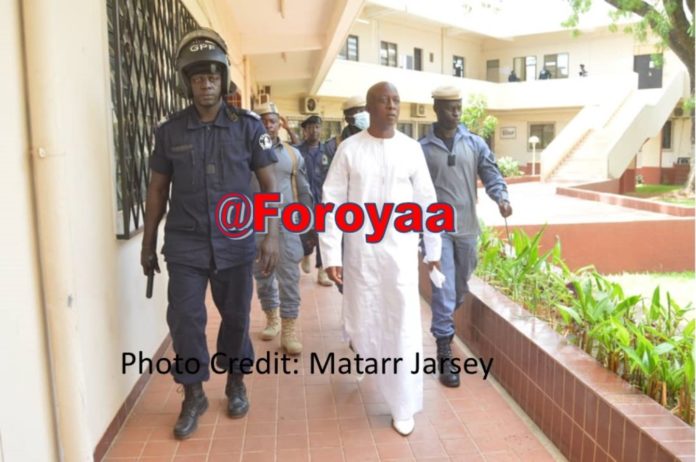 Yankuba Touray’s lawyer, Abdoulie Sisoho succeeded in one of his motions while the other was refused by the High Court on Monday.

Counsel Abdoulie Sissoho wanted the court to issue a subpoena to the Judicial Secretary to produce the file docket of Coroner of Brikama in the West Coast Region, The Gambia in relation to the death of Ousman Koro Ceesay in the year 1995. Lawyer Sisoho also wanted the court to issue subpoena to The Executive Secretary of the Truth, Reconciliation and Reparations Commission (TRRC) at the Dunes Hotel in Kololi to produce the official transcripts of the oral testimony of Edward Singhatey in connection to the death of Ousman Koro Ceesay.

The motion on notice (by Lawyer Sisoho) was supported by a 20-paragraphed affidavit sworn to by one Muhammed Sissoho, a Legal Clerk in the office of Abdoulie Sissoho’s Chambers. The Respondent (The State) was served with the motion on notice but did not file an affidavit in opposition. The Respondent’s Counsel did not file an affidavit in opposition but opposes the application on points of law.

Justice Jaiteh said the mere fact that a party did not file an affidavit in support of a motion served on him should not be taken to mean that he has conceded to the application, as he relied on a decided case.

In moving his motion paper, Counsel Sissoho for the Applicant brought his application pursuant to sections 220 and 221 of the Evidence Act and sections 241 of the Criminal Procedure Code. Counsel for the Applicant relies on all the paragraphs of the supporting affidavit and submitted that there was no affidavit in opposition to the affidavit in support, which stands unchallenged or uncontroverted. Counsel relies on the case of Antoine Banna v Ocean View Resort & others and the State v Abdoulie Conteh. Sisoho urged the Court to sign the subpoena so that the Judicial Secretary can produce the said file to the court. With regards to the second prayer on the motion paper, Counsel Sissoho submitted that without the production of the documents from the TRRC, would cause great hardship to the Defence and would deny the constitutional right of the defence.

In opposing the motion on notice, Counsel Abdul Maita Yusuf submitted that with regards to the first prayer which is to subpoena the Judicial Secretary to produce the file docket of Coroner of Brikama is not tenable on the grounds that there was no investigation pertaining to this case as provided in the testimonies of Pa Habibou Mbye and Muhammeh Bojang who were both witnesses before the court in the ongoing suit. The Principal State Counsel thus refers this Court to section 5 of Coroner’s Act and submitted that it is only after police investigation that a Coroner inquest can be conducted and since there was no investigation, there is no Coroner file docket in Brikama and the granting of prayer one would be an exercise in futility. Yusuf further refers this Court to section 4(1) of the Coroners Act and presupposes that a Coroner can direct for post mortem to be carried out before an inquiry is commenced. Yusuf argued that Exhibit P3 does not state that there was a Coroner inquiry and thus assumed without conceding that there was Coroner Inquest, the Applicant (Sisoho) has not provided enough particulars for the Judicial Secretary to produce the Coroner file of Brikama as contained in the first prayer of the application. Yusuf submitted that paragraph 7 of the affidavit in support is incorrect and thus relies on section 3 of the Coroners Act and urged this Honourable Court not to rely on paragraph 7 of the affidavit in support.

With regards to prayer two of the motion paper, it was the submission of Counsel Yusuf that the testimony of Edward Singhatey before the TRRC is irrelevant and would be an exercise in futility as the Prosecution would not have the opportunity to cross-examine the said Edward Singhatey. Yusuf drew the Court’s attention to a similar application which was made and statements of witnesses before the TRRC were produced and admitted into evidence and the makers of the statements were in court and were cross-examined on the said statements.

The Principal State Counsel urged the Court to apply the same principle. The Respondent’s Counsel submitted that paragraph 14 of the affidavit in support contravenes sections 89, 91, and 92 of the Evidence Act as the source of the information was not disclosed and therefore urged this Court to expunge paragraph 14 from the affidavit in support. Counsel Yusuf argued that paragraph 6 of the affidavit has not supported attachment and if the Court is minded to accept paragraph 6 without supporting attachment, thus urged this Court to rely on the evidence of Pw5 and Pw7 in the record of proceedings and apply the same principle as he relied on the case Gamstar Insurance Company Ltd v Musa Joof (Civil Appeal No. 01/2003). Yusuf urged the Court not to grant the prayers sought for the reasons stated above.

In replying on points of law, Lawyer Sisoho submitted that the Gamstar Insurance Company Ltd v Musa Joof (supra) was misapplied and misconceived regarding affidavit evidence hence the case was about Order 2 rule 7 of the High Court Rules of the Second Schedule. Sisoho argued that Yusuf’s submission that paragraph 6 of the affidavit in support being secondary evidence is also misconceived. Sisoho referred the Court to the case of Lang Conteh & Others v T. K. Motors and the case of Antoine Banna v Ocean View Resort and submitted that facts not challenged are deemed as admitted. Counsel for the Applicant relies on Order 24, rules 23 and 27 of the High Court Rules of the Second Schedule. Counsel argued that paragraph 14 does not offend sections 88, 89, 91 and 92 of the Evidence Act 1994. Sisoho submitted that Coroner is not a court of law like the High Court or Subordinate Court where processes are filed to invoke the jurisdiction of the Court and thus refers to sections 3, 4 and 5 of the Coroners Act. Sisoho argued that the Chief Justice appoints Magistrates under Coroners Act.

Justice Jaiteh took time to define the word Coroner and according to The Tenth Edition of the Black’s Law Dictionary defines Coroner at page 414 to mean “A public official whose duty is to investigate the causes and circumstances of any death that occurs suddenly, suspiciously, or violently.”

Justice Jaiteh said once a Coroner inquest is terminated, the proceedings shall immediately be forwarded to the office of the Chief Justice who has the power to review the record of proceedings for the purpose of satisfying himself or herself as to the correctness, legality or propriety of any find or verdict and as to the regularity of the proceedings.

The Judge said all record of proceedings of Coroner Inquest in The Gambia are lodged with the Chief Justice and the Judicial Secretary as per section 143 (2) of the Constitution is mandated to be responsible to the Chief Justice for the performance of his or her duties.

“From the foregoing reasons and considering the fact that record of proceedings of all Coroners in The Gambia are lodged with the Hon. Chief Justice and the Judicial Secretary is responsible to assist the Chief Justice with his or her functions, I therefore reach the conclusion that the Judicial Secretary should be in possession of the file docket of Coroner of Brikama in the West Coast Region, The Gambia in relation to the death of Ousman Koro Ceesay in the year 1995,” Jaiteh ruled.

On whether the tendering into evidence before this Honourable Court the official transcripts of oral testimony, affidavit(s) and or the written Statement(s) of Edward Singhatey in connection to the death of Ousman Koro Ceesay tendered and marked as an exhibit in the proceedings of the TRRC be admissible in evidence before the Court without calling the said Edward Singhatey as a witness in the case, Justice Jaiteh said that is a matter of practice and procedure.

Jaiteh said a subpoena is a court process commanding any person to attend court and produce a document or give evidence before it.

He added: “In my view, if Edward Singhatey cannot be presented to this Court as a witness and be cross-examined on his evidence and these documents, then the purpose of producing these documents will amount to an exercise in futility.”

Jaiteh borrowed the words of Justice Niki Tobi of Nigeria who stated “Litigation is not the children’s game of hide and seek. It is not a game of smartness. It is not a game of artifice or cunning display of a smart conduct design to overreach or outsmart the adverse party. On the contrary, litigation is a decent, open and not deceitful process of making and defending claims in a court of law. The art and craft of even the most litigious person does not allow him to set a trap with a bait to lure the adverse party, as if he is a fish. That should be left to the fisherman or the keeper of an aquarium; not the courts.”

“I must state that cross-examination is a right that can be equated with the right of fair hearing, denial of which will annul the proceedings without mush ado. It is also a weapon, which a party employs, to not only put his case across, but also to demolish his opponent’s case and cast a credibility problem on such witness and his case. As a matter of good practice, it would be prudent and fair for Edward Singhatey to mount the witness box lead evidence and the Defence can then make the necessary application to subpoena the said documents from the TRRC and the prosecution will not be prejudiced as they will have the opportunity to cross-examine him,” Jaiteh said.

Jaiteh said in the case of Ensa Mendy (Pw2) and Alagie Kanyi (Pw6) testified before the TRRC and were called as witnesses before the Court and they gave evidence and their testimonies from the TRRC were produced before and were cross-examined by the other party.

“I believe in the interest of fair trial, the same procedure should be followed, whereby Edward Singhatey should be called as a witness and the Defence can then apply to subpoena these specific documents where he will be cross-examined on the said documents,” Justice Jaiteh held.

The Judge said by granting the second prayer whilst the Prosecution would not be able to cross-examine Edward Singhatey on the said documents would in his view be grossly prejudicial to the prosecution and it may render this trial a nullity.

Meanwhile, the defence made another application for the intended witness to testify through a virtual hearing process since the witnesses intended to be called as defence witnesses are all out of the jurisdiction.

The case resumes today for the prosecution to respond.